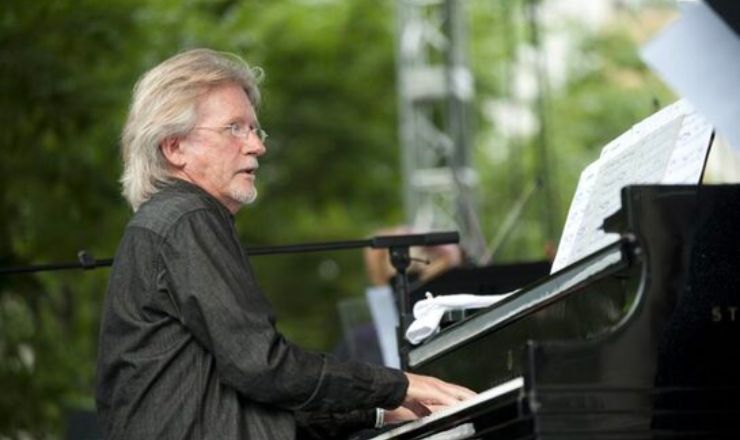 Born in New Zealand but resident in the United States since 1966, Alan Broadbent has carved an enviable reputation as one of the finest pianists, composers and arrangers of his generation. A double Grammy winner, Broadbent was also a member of Charlie Haden’s Quartet West along with working with Sheila Jordan, Natalie Cole, Irene Kral, Woody Herman and Chet Baker.

One of the characteristics in Alan’s music is his refusal to stand still, always looking for something new, and to learn from previous musical encounters.

This trait has been especially evident and fruitful in recent years with the pianist seeing a long term project realised in his astonishing album Developing Story released in 2017, the same year that saw the release of Songbook, a selection of twelve songs with music by Broadbent assimilated over more than quartet of a century with lyrics by Georgia Mancio. ​​

What started a rather casual acquaintance in 2013 quickly developed into a song writing partnership without parallel, with the pair now having written some 33 songs, and recorded 21 of them on two outstanding albums, the aforementioned Songbook and their latest release, Quiet Is The Star.

This to me is one of the greatest of all jazz solo piano recordings. Not only because of the beautiful lines, without licks or clichés, but because of the tension between the right and left hands, that feeling that only jazz can produce.

This has the famous “Line Up” improvisation on “All Of Me”, now, 60 years later, transcribed and performed by all kinds of musicians on YouTube. But it also includes many other great and original moments. For Charlie Haden’s Quartet West I orchestrated for a string orchestra the introduction Lennie improvised to his blues tribute to Bird, “Requiem”.

My favorite Bill Evans album. Bill is not quite the Bill we’ve come to know and his improvisations are full of surprises and melodic twists and turns. His debt to his beloved Bud Powell is very evident in his swinging and urgent eighth notes. ​

Here he is in all his genius. A new level of deep feeling and intensity expressed in his placement of the eighth note, which is the essence of bebop time. To me “it don’t mean a thing if it ain’t got this swing”. Also here is Bud the composer, often overlooked, his sense of melody which lives on today and forever.

This was my introduction to jazz arranging on another level of color combinations and intricate voicings. The first time I ever heard it “live” was my first week at Berklee College in 1966. I heard a familiar, beautiful sound and followed it down into the basement where I found Herb Pomeroy rehearsing his recording band. They were playing “Maids of Cadiz”, arranged by Gil, and I knew that I wanted to learn how to write like that someday.

A perfect lesson on how to write for orchestra and singer. I used to rent the LP from the Onehunga (Ony -hunga, NZ) library when I was in my young teens because of the beautiful songs I was learning to play. Little did I know then that, many years after Nelson Riddle had worked with Sinatra, I would be his piano player for many of his TV gigs during the last 10 years of his life.

Ironic too, because my favorite thing to play when I was that teenager was Nelson’s theme from my favorite TV show, “Route 66”, which I came to play in person on Nelson’s big band dance gigs. ​

He was a relatively young man when he wrote this and to me it’s every bit as vital and beautiful as Petrushka or The Rite of Spring. How he acquired the virtuosic orchestral technique to produce this in 1917, without an orchestra available to him, is a mystery to me. Full of descriptive and expressive beauty. Those trees and the river! How did he do that?!

To me, this is the only version of the 9th. I heard it live with Karajan and the Berlin Phil at the Ambassador Auditorium in Pasadena, just before this recording.

I had an amazing seat, 10th row from the stage, stadium seating, as he came out, looking quite old, conducting from memory. At the end there was absolute silence, then slowly a rumble of feet and applause began that wouldn’t stop. We were all in tears as Karajan turned in amazement at our reaction.

The intensity of feeling and the virtuosity of the orchestra on this recording are unmatched, at the beginnings of the digital age.

Everything here is perfect, the tempos, the sound. I heard Ms. Battle live once with the LA Phil singing some Richard Strauss songs. I remember she began the beautiful “Morgan” with outstretched arms, like Billie Holiday, and I lost it. Here she sings the 4th movement with a perfect childlike quality as instructed by my main man, Mahler.

I know this is not kosher, but if I don’t mention it nobody will. I consider this work to be unlike anything before it, jazz or classical.

The beginning theme was written many years ago and took as many years to create. Everything, the three movements, every melody, interlude, and development, is interrelated, including the counterpoint and the big canonic imitation towards the end, all culminating in a restatement of the beginning theme for full orchestra and piano.

It’s full of beautiful, memorable things and took a great deal of effort and emotion to write. Just sayin’…