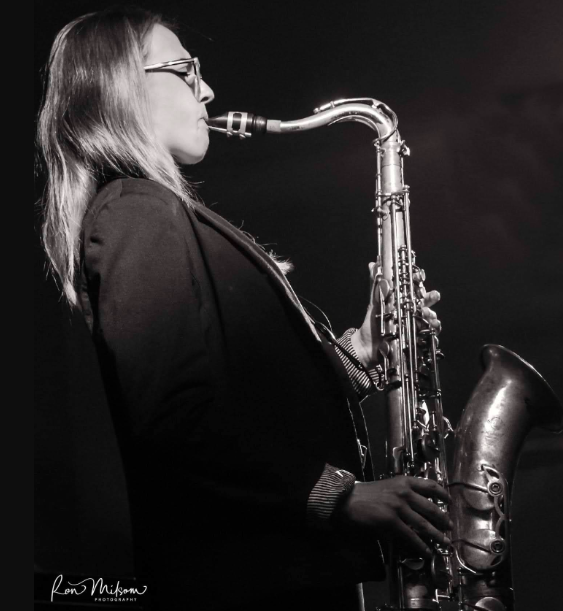 With the release of her second album,”Only A Year”, saxophonist Alex Clarke is keeping the bebop/hard bop tradition alive and well. In doing so, she performs fresh exciting music that draws from jazz’s rich past, with a contemporary feel that acknowledges influences and yet refuses to be confined by them.

The following interview reveals a young musician with a solid grounding in the music that she loves, and the ambition and determination to succeed in what can be perceived as a difficult and precarious profession.

Firstly, can you tell us about your new album, Only A Year?

Released earlier this Summer, Only A Year is a straight-ahead bebop album, drawing on a culmination of all my music influences from the American Songbook and New Orleans to Cuban Jazz and Bossa Nova.

It features a mixture of my own arrangements of standards, original compositions, and music by some of my saxophone heroes such as Phil Woods and Paquito D’Rivera.

That’s quite a rhythm section you have on the album! How did you get together with David, Dave and Clark and had you played much together as a quartet before the recording?

It was actually Clark’s suggestion that I put something together and get into the studio. I had done a few gigs with each of them before and knew that they had all worked together a lot over the years.

However, the first time we ever played together as a quartet was on the day of recording! Admittedly, a bit of a risk, but something about that made it seem fresher and more exciting, and I of course fully trusted these guys to do a fantastic job.

I feel extremely lucky to be working with such established and legendary players whose playing I love so much; it has certainly made me raise my game and I have undoubtedly learnt a lot since working with them.

There is a varied selection of tunes featured. How did you go about selecting the material for the album?

I tried to select a balanced selection of tunes that best reflected my musical influences. Due to my love of standards and the American Songbook, I knew I wanted the overall vibe to be straight-ahead.

The choice of repertoire may seem a little eclectic and unconnected – a New Orleans second line groove next to a bossa – but hopefully my arranging style and the overall band sound makes the album still sound cohesive as a whole.

Your debut album, Mirage, was released in 2018. Why have you waited so long before recording a follow up, and how do you feel your playing has evolved between recordings?

I could blame the pandemic for not having recorded sooner, but in reality, I suppose there has definitely been an element of procrastination with me releasing a new album!

I think it’s easy to keep on waiting for the ‘right’ moment, when you feel like your playing is at its strongest, but we all know that there is no real end goal to that, and you’re going to be waiting your whole life if you want to capture yourself at your ‘best’.

By shifting my mindset to ‘this is where I am at now’ and putting any insecurities about my playing to one side, I have created something that I feel is an honest snapshot of my playing to date.

Having listened back to Mirage recently, I am pleased to hear that my playing has definitely evolved since then, both in terms of my sound, and having a stronger, more distinctive musical identity.

Both albums have featured an original composition, and two in the case of Only A Year. Is composing something that you enjoy, and can we expect to hear more of your tunes in the future?

I do really enjoy writing, however it’s one of those things that I always struggle to find time to do, as I feel guilty that the time spent writing would be better spent practising.

I think there is a lot of pressure to come up with ground-breaking, innovative ideas when writing, but as I develop my own composition and arranging style, I am becoming more comfortable with writing as I play: in a straight-ahead, bop style.

Due to my love of standards, I am keen to write a set of contrafacts – new melodies on old chord sequences – as I feel like this will tie together my respect for the tradition of the music, with my own creativity and musical identity.

The last four years have been quite eventful. From recording your debut album to winner of the Rising Star category in the 2019 British Jazz Awards, finalist in the BBC Young Jazz Musician of the Year 2020, and nominated in the Parliamentary Jazz Awards in 2021.

What you would say have been the highlights of the last few years, and how have they impacted you as a professional musician?

I am of course absolutely delighted to have received these awards and recognition; it feels reassuring and rewarding to know that people have seen value in what I do.

But thinking more holistically, I suppose my biggest achievement overall is that I’m here, managing to make a living as a full-time musician. Ever since I was around 14 years old I had always wanted to do this, and was fully aware of the risks, time and commitment it would involve.

To now spend all my days doing something that I truly love – and to have proven all the people wrong who had said it was unwise to go into this profession! – feels like such an accomplishment.

A question I’m sure you’ve been asked before, but how did it feel to reach the final of the Young Jazz Musician of the Year final. How did you prepare for the final and what are your recollections of the day?

In all honesty, I was amazed! I had only really applied on a bit of whim during lockdown and was acutely aware that my playing was probably a lot more ‘old-school’ than a lot of other entrants.

So, I was delighted to be able to fly the flag for bebop and swing and just be myself. In the lead-up to the final, I was still working full-time at Warwick School, so went into it feeling thoroughly underprepared;

I was still writing the charts on the week of the performance. But the whole experience was absolutely wonderful. It didn’t feel at all competitive, as all of the finalists were all so musically individual, and not to mention, really lovely, ego-less people.

I would definitely encourage anyone who is unsure about applying, to simply go for it, as there is absolutely nothing to lose, and so much experience to gain!

How did you get interested in music and playing the saxophone?

I definitely have my school to thank for this. I was extremely lucky to go to a school that had such a vibrant music department, and we were all encouraged to learn an instrument right from the outset.

In my earlier years at school, I had already enjoyed playing flute and piano, but my desire to join the school jazz band was what caused me to start the saxophone.

This, alongside my parents buying me second-hand jazz CDs from charity shops and taking me out to jazz clubs in the North West, really sparked my passion for the music.

I was then lucky enough to begin sitting in with established bands and musicians at local clubs, which eventually led to me picking up work, giving me my first taste of what being a professional musician would be like.

There is little to choose between your alto or tenor playing. Do you a natural affinity for one or the other?

I go through phases of preferring one more than the other, depending on what I’ve been listening to recently, and how I’ve been perceiving my sound in my head on each.

I did start playing alto before tenor so I suppose I’ll always feel a little more at home on the alto, but I can honestly say that overall, I have no preference! I like both horns for different reasons, and enjoy the challenges and nuances that each horn brings.

Who would you say have been influences on you as a saxophonist?

As previously mentioned, Phil Woods is a huge influence of mine. The energy and intention behind his playing, his direct, bright sound and his broad range of repertoire, all continue to inspire me whenever I pick up my horn.

I am also a huge fan of the swing era tenor players such as Ben Webster and Zoot Sims, for their rich, warm sound, melodic language and great time feel.

For the same reasons, I became enthralled with Scott Hamilton’s playing right from the start of my saxophone journey and continue to love every note he plays.

As you can imagine, I was absolutely delighted that Scott kindly agreed to write the liner notes of Only A Year for me.

You also play in a many different areas of the music from New Orleans to hard bop, taking in big bands and swing. Can you tell us about some of the other projects that you’re currently involved in?

I really love all the variety that comes with being a jazz musician. I came into jazz through playing traditional New Orleans music, so I always enjoy revisiting the heritage of the music.

As well as doing a lot of gigs as a guest with various trios around the country, I play regularly with The Jake Leg Jug Band who play 1920’s jazz, blues, skiffle and spirituals.

I also work with pianist and vocalist TJ Johnson whose repertoire spans jazz and blues to country.

I absolutely love playing big band music, and I have had the pleasure of doing a couple of gigs with The Simon Spillett Big Band recently; an absolute masterclass in the art of hard-swinging, authentic big band playing.

And finally, what next for Alex Clarke? Do you have a plans to take the quartet out on tour or any other projects lined up?

We have a UK tour planned for January/February 2023 (more details coming soon!) where we’ll be featuring repertoire from the new album. We also have a growing number of dates for later in the year, and I hope to have some shiny new arrangements and compositions ready for then.

At some point, I’d love to compose an entirely original suite of music for the quartet; definitely something to think about as we head further into 2023.