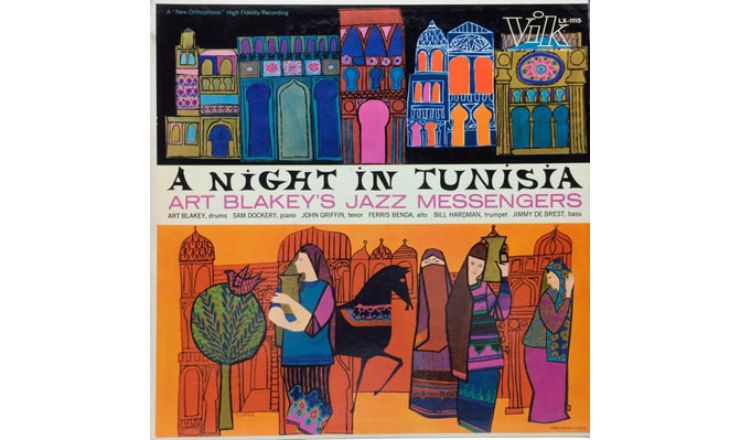 Not only was Art Blakey one of the very greatest of the modern jazz drummers, he was also a magnet to many up and coming musicians on their way to A grade status, in a similar way that both Duke Ellington and Miles Davis were. Luminaries such as Wayne Shorter, Wynton Marsalis, Freddie Hubbard and Benny Golson passed through the many editions of The Messengers ranks, a band conceived by Art in 1956. As for the Pittsburg born musician himself, his first influence after converting from his youthful interest in the piano, was big band drummer and band leader Chick Webb. The aggressive and thunderous style of his predecessor could still be heard in his playing many decades later. Sadly Art’s mother died giving birth to him but by the 7th grade of his education he abandoned his studies to jam with the likes of Mary Lou Williams, Billy Eckstine and Fletcher Henderson. Many accolades followed over the years including entry to The Downbeat Hall Of Fame in 81, plus The Grammy Hall Of Fame and Lifetime Achievement award posthumously in 2005. Art had converted to the Muslim religion in his late forties and died of lung cancer in 1995 aged 71. During his lifetime he had fathered ten children, from various relationships and led his magnificent hard bop sextet for nearly forty years.

It was only two years into The Messengers lifetime when this album was recorded. The very title, and longest track on the album, has a veritable magic about it. The mention of this masterpiece from Dizzy Gillespie and Frank Paparelli usually returns listeners minds to the legendary performance back on 15th May 1953 at Massey Hall in Toronto by Bird, Dizzy, Mingus, Bud and Max. This single performance of one of the great jazz standards is likely to remain the bench mark that all other versions are measured against. In terms of excitement this recording of “Tunisia” comes close to its lauded predecessor without quite fully capturing the exotic atmosphere. Art sets the scene, as he almost always does, as his multi rhythmic storm appears from over the horizon to be eventually greeted by the spine tingling sound of the front line horns as the theme emerges. Each break away in turn for strong meaningful solo statements, plus there is a calming interlude from Sam Dockery’s piano before the obligatory second reading of the tune and dramatic close.

Art’s reputation for bringing younger players through to greatness was yet to be fulfilled by 1958, but for this recording he was able to call on established top level musicians, perhaps with the exception of bassist Jimmy De Brest, also known as “spanky”, who was only twenty one at the time. Johnny Griffin was one of the most charismatic tenor players of the era and went on to star in the Clarke/ Boland Big Band and record as a leader for Blue Note Records before spending his final years based in France. Harlem born Jackie Mclean, although only twenty seven at the time, was already an established as an individual voice on the scene and went on to record on over one hundred albums. No frills trumpet man Bill Hardman had a good deal of Clifford Brown’s influence in his playing and later appeared with the likes of Charles Mingus and Horace Silver. The piano chair was filled by Sam Dockery, a hard swinging straight ahead player who gigged with many top liners, but remained under recorded perhaps due to the wealth of master players in the United States during his most active years. He eventually drifted away from live performance to become a music lecturer at Philadelphia University.

After indulging in almost thirteen minutes of “Tunisia” you still have four fine tracks of compelling hard bop to treat your ears to. Immediately following the title cut is “Off The Wall”, a Johnny Griffen composition containing a strong theme and plenty of ensemble swing plus a strong solo from the composer. “Theory Of Art”, a rare tune from the pen of trumpet man Bill Hardman, gets things underway on side two, there’s plenty of high energy playing here, cascades of thunder from the leader, a strong solo from the composer plus a calming passage from piano man Sam Dockery. Art Blakey joined forces with altoist Jackie McLean to compose the very well crafted “Couldn’t It Be You”. Everyone gets a good chance to blow here with McLean on top of his game on this mid tempo melodic piece, Hardman is also at his best with once again the underrated Dockery centering everything from the piano. “Evans” a tune attributed to Sonny Rollins and recorded live, closes side two, there’s lots of ensemble work here, a genre in jazz which “The Messengers” of all generations had few equals. Bill Hardman contributes a lip bursting solo, but the honors go to the heady exchange between the two saxophonists.

The album is a fine example of late fifties hard bop under a charismatic leader and worth seeking out for the title track alone.