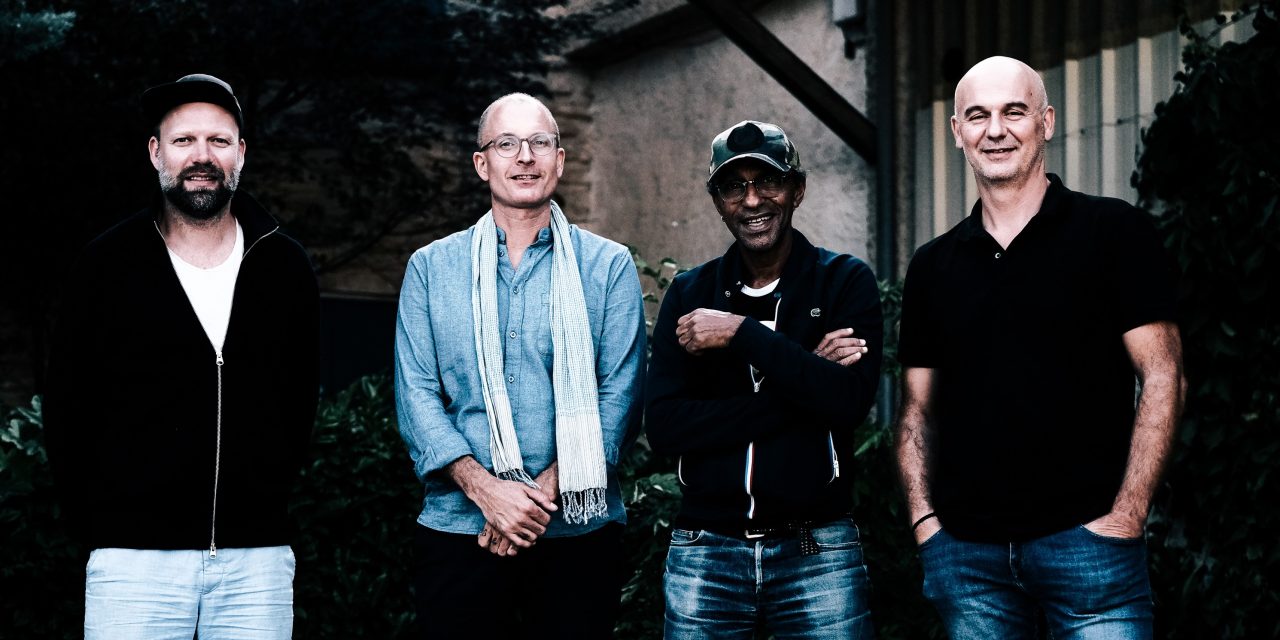 I think this is a relationship that will last.

Pianist Benjamin Lackner has a string of fine trio albums under his belt but has now formed an exciting new quartet who have just released their debut album for ECM.

Featuring a stellar group of musicians with Lackner in the company of Mathias Eick on trumpet, bassist Jérôme Regard  and Manu Katché at the drums, the music has grace, lyricism and grooves in equal measures.

It was therefore a privilege to talk to Benjamin about the new band and recording.

Firstly, can you tell us about the album, and how you came to record for ECM?

I met Manfred Eicher for the first time in Berlin in 2015 and we had been in touch about collaborating since then.  I met Manu Katché in 2019 and we mutually agreed that we should record together and when he proposed this idea to ECM they agreed.

After I showed Manfred a few of the songs it was decided to record acoustically in France at La Buissonne Studios.

Needless to say, everything was delayed another year due to the pandemic, but I had the honour of being part of Manfred’s first recording session after the lockdown.

How did you find the experience working with a producer like Manfred Eicher?

Manfred was like a fifth band member and crucial to the outcome of this recording. He reminded me of a wise theatre director who knows exactly how to play off of each actor’s strengths and keeps an eye on the big picture.

He mirrored my output in a way that let me reflect on what we just produced and then guided us towards a clear path that helped us find the right approach by making us aware of certain aspects of the music such as timing, range, dynamics, the order of compositions in relationship to where they made sense on the album and allowing us to form our own opinion about where the music needed to go next and whether or not it felt good and was flowing in the right direction.

When the idea of recording a quartet was proposed how did you go about selecting the musicians. Did you have specific players in mind that you had already decided that you would like to work with?

When I first saw Mathias Eick play at a concert of his in Bremen everyone in the room could feel and hear that his sound and his songs really have such an emotional strength, and I knew that I wanted to work with him from that point on.

Jerome Regard and I have been working together since 2006 and he is a trusted partner in the studio. I have always had faith in his wonderful ideas, both rhythmic and melodic as well as in his arrangement ideas.

It was amazing to finally play the music in person after having shared the material between Norway, France and Germany over the course of a year. Jerome and Mathias had recorded demo versions from their homes which helped me get an idea of the direction the music could go.

You have said that writing for the quartet was a new experience for you? How did you approach your composing for the album, and did you write specifically with Mathias’s trumpet sound, for example, in mind?

Yes, since I had more time than ever before during that year before the recording, I truly was hearing his trumpet sound when I was writing.

We decided early on that this would be an acoustic record which made it easier for me to focus on a direction and allowed me to rediscover the piano more intimately.

I worked on finding grooves that made me hear melodies in a more open way.

With a horn player in the band I had to come up with harmony parts on the piano and think of the trumpet as the leading voice which was new territory for me since I am used to playing mostly in a solo or trio setting, it was a nice change to write with Mathias in mind because his phrasing fits perfectly to the way I hear melodic material.

What is interesting is the way the compositions have a definite structure and overall feel to them but yet are not constrained by the form. Was this a conscious decision on your behalf as composer, or something that evolved during the recording sessions?

In the studio, the musicians were so open minded, and we ended up making several changes that would fit the music in the right moments. We stripped away some of the unnecessary parts that felt too restrictive or redundant.

Just to give you a little background on the compositions, ‘Where We Go From Here’, this is the point of departure for this album. It was a simple melody written with a trumpet and piano duet in mind. We tried it with the whole band, and it made the forward motion of the piece come together.

I tend to compose and practice piano best when my outer surroundings are stable. On ‘Circular Confidence’ the piano intro happened spontaneously, and the melody is freely shared between trumpet and piano. Mathias’s phrasing is elastic. Jerome and Manu open up the feel of the solos and the groove expands throughout the song.

With ‘Camino Cielo’ I have brought in some personal history. This mountain range in California signifies the resting place of my ancestors who relocated from Germany to California in the 1930’s and made a new life for themselves in Southern California.

My grandparents were a huge inspiration to me and always helped me to pursue my dreams. This melody is a tribute to them.

The next composition, ‘Hung Up On That Ghost’, is piece is about influences. I spent a long time learning from my idols but always tried to make sure not to let them stifle me in my own development.

This song could be be called, “I didn’t get hung up on my ghosts”. Mathias sings on this song which to me gives it a very pure feeling.

The title track, ‘Last Decade’ again has personal connotations. I met my wife in this decade and learned how to be a father of two. This has definitely made me a better person and allowed me to learn how to ground myself and that there is more to life than music.

I moved back to Berlin after 20 years of living in California and New York. In this decade I reached my lifelong dream of recording with Manfred Eicher. A dream which I have had since the age of 14.

On ‘Remember This’ I was thinking about which moments will we remember? Which of the moments we experience will we hold on to later in life?

This version is without trumpet and is groove based. As a contrast to the groove, I chose harmonies which are more dissonant than on the other songs.

With ‘Open Minds Lost’ this title has multiple meanings to me. The most obvious one is the state of mind of the United States within the Last Decade. Manu came up with a great drum pattern which made the entire song very powerful.

‘Émile’ is a short piece for solo double bass. Jérôme’s son is named Émile and Jérôme improvised this one in the moment at La Buissonne as tribute to him. It makes for a great segue to the last song of the album, ‘My People’.

This song is dedicated to all the people in my life that have been supportive of me and listened to me and have been there for me throughout my life. They are scattered especially in Berlin, New York and California and it’s a challenge to maintain in close contact with everyone over the years.

But they are a part of who I am today. The song was originally in 11/4 and was meant to be kept in time. We changed the head to rubato and came up with an open vamp in the middle.

There appears to be plenty of room for improvisation and loosening of the structure during performances of each piece. This almost runs as a contradiction in terms of the way that Manu constructs his accompaniment in patterns that for all their apparent rigidity have a flow and logic of their own. Have you played much with Manu previously, or did he just allow his parts to evolve organically with the written material?

This was my first time playing with Manu. He came up with some wonderful beats and the session really had an overall feeling of freshness because of it.

His approach to drumming exudes a quiet confidence which leaves space for the music to breathe. Even when he plays quietly, his beat is very strong and wide which makes it very easy for everyone to come together.

One musician in the quartet that you have a long musical association with is bassist Jérôme Regard, who plays in your longstanding trio. How did you both adjust to different roles within the new band, and did the process call for a change in the way you function together?

That’s an interesting question and I would say that it was not all that different except that we left more room for the fourth instrument.

Jerome played electric bass on most of the trio records so hearing him playing acoustic bass at this level was quite astounding and inspiring to me. His musicianship has so many facets.

The music on Last Decade has a feeling of completeness about it, yet the compositions and concept are left wide open. Are there plans to keep the quartet together long term, and develop the music further?

I feel honoured that the band is interested in playing live and we already have a few tours in the works for 2023.

It will be such a pleasure and joy to play live with these guys and I am very curious as to how the music will develop. I think this is a relationship that will last.

You divide your time between New York and Berlin, how do you juggle travelling and running a band on two different continents?

I centre my life around Berlin now. I have a place in Brooklyn, but I have my wife and kids in Berlin. One could say that I am based in Europe these days.

And plans for the future? Do you think that you may be looking to spend more time in Europe, or is the US the place to be?

What’s happening now is that we are getting more offers to play in the US and Canada with this new album already. So, there will be lots of back and forth. Since my parents and sister still reside in the US, I will combine it with visiting the family as well.

You can read our review of Last Decade here .