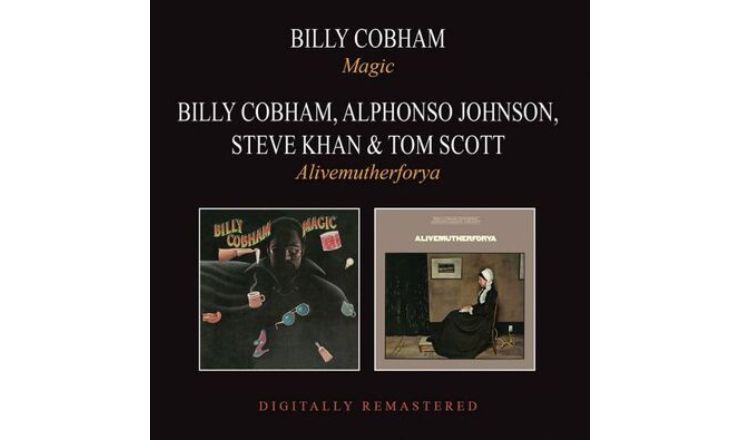 The Seventies was an incredible decade for drummer Billy Cobham. He started it with a series of sessions with Miles Davis, some of which resulted in the ground-breaking jazz-rock fusion album Jack Johnson. Soon after, he became a member of the first incarnation of The Mahavishnu Orchestra, appearing on their first two albums, The Inner Mounting Flame and Birds of Fire. The impact and influence this band had on the jazz, rock and fusion worlds cannot be overstated. And if all that wasn’t enough, in 1973, Cobham released his first solo album, Spectrum, a classic jazz-rock fusion album whose impact still resonates today.

So, when it came to jazz-rock fusion, Cobham was riding high and his record label, Atlantic, was very supportive. However, Cobham’s later albums never quite reached the same level of success as Spectrum, which was a top 30 Billboard album, and a number one Jazz album. In 1976, Cobham released his final album for Atlantic, as part of the Cobham-Duke band, featuring keyboardist George Duke, guitarist John Scofield and bassist Alphonso Johnson. The two albums on this release mark a turning point for Cobham, as he left Atlantic and joined Columbia Records, and also departed from the Cobham-Duke band. Magic was his first solo album for Columbia, with Cobham handling composition, arrangement and production. The follow-up, Alivemutherforya, is a live performance in a studio setting with an all-star band.

As ever, this BGO compilation is nicely packaged, with a thick CD booklet featuring original liner notes, photographs and excellent new liner notes from musician, writer and music blogger Matt Phillips, who interviews Cobham and guitarist Steve Khan. Phillips provides lots of interesting background detail and track-by-track descriptions. Magic opens with ‘On a Magic Carpet Ride,’ a lively jazz-funk tune that features two keyboard players, including, Joachim Kuhn, a German-born keyboardist, who was a music prodigy, and had played with Lee Konitz, Jackie McLean and Joe Henderson. The second keyboardist, Alex Soskin, had previously been a member of the Latin-Jazz band Azteca and also played with Bill Summers and Bobbi Humphrey.

On the opening number, Cobham sets up a great groove, with bassist Randy Jackson (who would later play with Jean-Luc Ponty and Narada Michael Walden) laying down a beefy bass line. The track features screaming guitar lines courtesy of Pete Maunu, a guitarist who ought to be better known in the jazz world (he has also played with Jean-Luc Ponty, Bobby McFerrin and Mark Isham) and who really lets rip on this track. Kuhn plays a majestic acoustic piano solo – his touch, feel and fluency reminds me of another superb pianist, the late Jorge Dalto, who worked with George Benson. The track ends with more explosive guitar from Maunu and lots of drum pyrotechnics from Cobham. ‘AC/DC’ features the percussionist Pete Escovedo, who plays timbales, and his daughter Sheila on congas, who was 19 at the time. She would later go onto play with George Duke and Prince, and become an artist in her own right, as Sheila E. Cobham had seen the father and daughter duo play together and subsequently produced two albums with them.

This mid-tempo track has a great Latin-jazz groove, with a chugging beat and a catchy riff played by Maunu, who also plays a searing solo. Weaving in and out the track are the dark, brooding lines of a clarinet played by Alvin Batiste (who had performed with Cannonball Adderley). Kuhn plays a sparkling solo on a mini moog synthesiser, with some excellent comping by Maunu, who ably demonstrates that he is more than just a guitar shredder. ‘Leaward Winds’ has Soskin handling all the keyboards on this mid-tempo tune, that includes more soaring guitar from Maunu and an excellent acoustic piano solo from Soskin.

‘Puffnstuff’ has an intriguing structure. It starts off in a jaunty manner, with a playful-sounding theme played on a tack piano, and Batiste playing sweet lines on clarinet. Just after the two-minute mark, it abruptly transforms into a bustling jazz-funk number, with a solid backbeat and wah-wah guitar. Cobham performs a rap with an anti-drug message, “Puffnstuff, puffnstuff/Got to get away from that puffnstuff/Puffnstuff, that smokin’ stuff/Got to be free so that my mind can feel the weed that’s all around me/All this huffin’ and a puffin’ and a huffin’ and a blowin’ and a snortin’ and a coughin’ and a snortin’ and the foolin’ with my mind/Can’t have that, oh no/ Won’t have that.’ The jazz-funk section continues for a couple more minutes, before the tune switches back to the jaunty, clarinet section and plays out on that.

“‘Anteres” – The Star,’ is a mid-tempo Latin-funk number that begins with a solid bass groove. The Escovedos add plenty of percussive effects, and Batiste plays a series of flowing lines on clarinet. The final track is a thirteen-minute, three-part suite. ‘Magic’ is a jazz-funk number that takes you straight into Stanley Clarke/George Duke territory. It’s a hard, driving tune that has Maunu’s guitar bursting out like an electrical storm. If you liked Ray Gomez’s sizzling guitar solo on Stanley Clarke’s ‘School Days,’ you’ll love what you hear here. Cobham plays a host of super-fast drum fills, and Jackson performs a meaty bass solo over a swing section, using a combination of slap, nimble finger play and fuzz effect.

‘Reflection In The Clouds’ is a reflective number, featuring light, delicate vocals from Pete Escovedo and soaring vocals Kathleen Kaan. It’s both dreamlike and dramatic, and the type of song you’d hear in a stage musical. Kuhn plays a glorious solo on acoustic piano with great support on bass from Jackson. The final part of the suite, ‘Recapitulation,’ returns to some of the earlier themes and features lots of explosive drumming from Cobham – his speed and fluency are astonishing. The problem with a lot of jazz-fusion albums from the 1970s, is that they have not aged well, but this isn’t the case with Magic, and this partly because the synthesisers have been deployed tastefully, and the acoustic piano dominates the keyboard solos. If you are a fan of jazz-rock fusion, Magic will prove to be a very satisfying listen.

Cobham’s next release, Alivemutherforya, was a live album project that had its roots in the CBS Jazz All Stars at Montreux Summit, an event that took place in July 1977. Around 30 artists were involved, including three players on this album – Cobham, Steve Khan and bassist Alphonso Johnson. The All Stars ensemble included Maynard Ferguson, Stan Getz, Dexter Gordon, George Duke, Woody Shaw and Eric Gale, and spawned two albums.

CBS’s plan was to put together a quintet – four rhythm players and one horn player, to go on a nationwide tour. But the tour proved to be a troubled one. As Khan explained to Phillips, Columbia had tried recruiting a number of high-profile keyboardists for the tour including, George Duke, Chick Corea, Jan Hammer and Joe Zawinul, but all turned down the offer. In the end, Cobham chose Mark Soskin, who had played on the Magic album and was a member of Cobham’s band. Soskin may not have been as well-known as the aforementioned names, but clearly had the chops and versatility to be on the gig – he plays a wide range of acoustic and electric keyboards.

Poor ticket sales caused the tour to be abandoned before it reached the West Coast, and plans to record a live album at one of the concerts were scrapped. Instead, the band assembled in Columbia Studios in New York and played to an invited audience. Even then, the audience response was so muted, that CBS was forced to add additional applause from previous recordings by Laura Nyro and Chicago. Sales were probably not helped by one of the weirdest jazz album covers. Based on the painting Whistler’s Mother, which shows the artist’s mother sitting in profile on a chair. The album artwork added a cable running from the chair to a wall socket, which made the poor woman look as if she was sitting on an electric chair…

It’s a shame that things didn’t pan out for the musicians, because this was a good band and there is a lot of fine music to be heard. Guitarist Steve Khan had recently recorded his first solo album for Columbia, and had played with Joe Beck, George Benson, David Sanborn and The Brecker Brothers. Bass maestro Alphonso Johnson’s resume included Weather Report, Chet Baker and Flora Purim. The horn player, Tom Scott, had been in the band LA Express, and was one of the busiest session musicians around, playing with the likes of Don Ellis, Victor Feldman, George Harrison and Steely Dan.

Strictly speaking, this isn’t a Billy Cobham solo album, because all the musicians, except Soskin, are listed as producer, and all have their names are on the album cover (poor Soskin didn’t even had a portrait shot included on the album, unlike the rest of the band, and despite being a fine composer and arranger, didn’t have any of his songs played on the album).

The album opens with Cobham’s “‘Anteres” – The Star,’ which has more fire and energy than the studio version. Scott solos of the Lyricon, which Johnson supports with a great bass riff. Johnson’s near-nine-minute ‘Bahama Mama’ is the longest track on the album and has a definite Weather Report sound and feel – many of the keyboard motifs sound as if Joe Zawinul is at the helm. Johnson solos over a reggae rhythm on fretless bass, with a rich, deep tone supplemented with effects such as wah-wah. Khan’s off-beat comping is impressive and adds a spark to the music.

Scott’s ‘Shadows’ is a sweet ballad played on soprano sax and the closest the band strays towards Kenny G territory. ‘Some Punk Funk’ is a Khan composition, which as the title suggests, is a piece of jazz-funk. Cobham and Johnson put down a heavy groove, with the bassist occasionally slapping. On the original version, Michael Brecker played the tenor sax, and Scott’s fast, furious runs, and powerful, explosive playing have clearly been influenced by Brecker. Khan plays the theme before unleashing some explosive guitar. It’s a short (around four minutes) but satisfying piece.

Scott’s second tune, ‘Spindrift’ is aptly titled, with Scott playing gossamer-like lines on soprano sax. The tune goes through a series of time signatures, from ballad to slow Latin groove, and samba to jazz-swing. Soskin plays exquisitely on acoustic piano and Scott solos over a busy jazz-swing section, with Johnson switching to a walking bass line and Cobham demonstrating his drumming finesse on ride cymbal and snare. It’s one of the best performances on the record. The album closes with a vibrant version of Cobham’s ‘On A Magic Carpet Ride.’ Soskin plays a long, winding solo on electric piano, and Khan lets loose with a gritty solo, before trading licks with Scott over a shuffle groove.