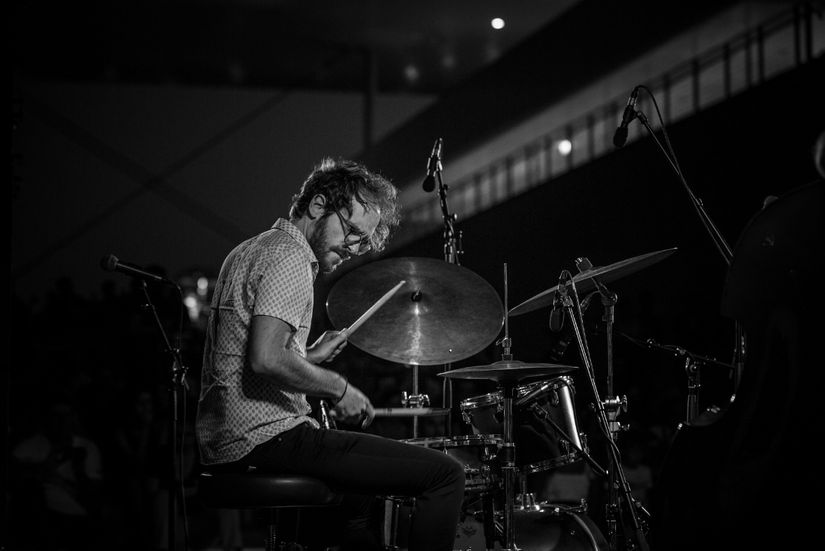 Billy Pod is the artist name of Greek drummer and bandleader Vasileios Podaras whose 2019 release ‘Drums to Heal Society’ saw him named by the French Magazine ‘Batterie’ as one of the ‘Top 10 New and Upcoming Drummers’ and facilitated a move from Athens to the UK capital.

Unlike his playing, the timing was not great: he arrived in London covid lockdowns swept the country and reduced the chances for networking and new collaborations.

Nonetheless, in just two years he has gone on to work with some of the city’s leading jazz musicians including Jim Mullen, Rob Luft, Dave O’ Higgins and Mornington Lockett and arrives at the end of 2022 with a new band and a fresh album.

The whole album, is a milestone of be-bop drumming.

Especially the track For Big Seed (dedicated to the legendary drummer Sidney ‘Big Sid’ Catlett) has become a ‘must know’ for all drummers that start becoming serious about jazz drumming. For me Max Roach represents elegance. I revisit this album quite often as it always inspires me to dig deeper into dynamics and phrasing.

The debut album of one of the best to ever play the drums. I love that this album is more open and free improvised.

It features both Richard Davis and Gary Peacock (2 double-basses) on the tune Two pieces of one: Red.

The textures and dynamics that Tony Williams uses on this album, make it one of my favourite ‘drummers’ album.

Especially his solo on the track Two Pieces of one: Green is one of his best. The development of ideas, flow of creativity, dynamics and use of textures gets me every single time.

Maybe my favourite Coltrane album. Crescent is just transcendental. I remember transcribing the whole track ‘Crescent’ note for note when I was studying in university. This music makes me think of the sky during night-time. When its so clear and there are no lights around but only the lights from the stars. They shine so bright that give you this feeling of energy coming from space.

I still revisit this album often and every time is a new experience.

Bill Evans – We will meet again

One of my favourite Bill Evans albums. Its deeply emotional as it was made with his brother Harry in mind, after his suicide in 1979.

I can feel the pain and lament in the compositions. My favourite track is a great solo piano version of the song For All we Know (We may never meet again).

The Brahms Piano Concerto No.2 for Piano, in my mind represents the music of dreams. It was composed 22 years after the 1st piano Concerto by Johannes Brahms. During the Andante part (my favourite part of the piece) he utilises a long  Cello solo which is unusual for a Piano concerto.  Melody feels very fragile to me and harmony feels quite unpredictable at times. Definitely one of my favourite pieces of music.

Maybe my favourite Symphony along with Gustav Mahler Symphony No.3.

Anton Bruckner composed really long pieces of work, which is very impressive. 80 minutes long on average for Symphony no.8.

When I first listened to it, it sound very complex and with so many orchestrating layers that I couldn’t follow the structure. It certainly needs multiple plays. My favourite part is the Adagio.

A small orchestral piece that I discovered by accident on Wayne Shorter’s album the Soothsayer. There is a cover version there that is completely different to the vibe of the original composition. It really inspired me and I did a version of it with my quartet on my latest album ‘Quintessence’ and to my own surprise this version was approved by the composers heirs. This piece represents 100% the culture and atmosphere οf Helsinki, one of my favourite cities.

Οne of Giuseppe Verdi’s most famous Operas. This version is performed by MusicAeterna with conductor Teodor Currentzis.

I believe that this orchestra has managed to regenerate and give contemporary breath to many of my favourite classical music works.

This album was my soundtrack during my first visit in New York back in 2014. It still remains one of my favourite albums, and I personally consider it the best one by James Blake. The atmosphere is so strong and has been following me on many personal moments.

Α less famous classic album by Radiohead (now the Smile Band) singer, song-writer. Everything that this man does – I love it.

A true genius. I feel that the Eraser has influenced a lot my compositions. I find myself many times creating harmonic movements and atmospheres/soundscapes but also grooves that are inspired from this album.

Thanks to Billy for taking part!

You can find out more about him and his November 2022 release via his website billypod.com

Find the rest of our musician playlists here.