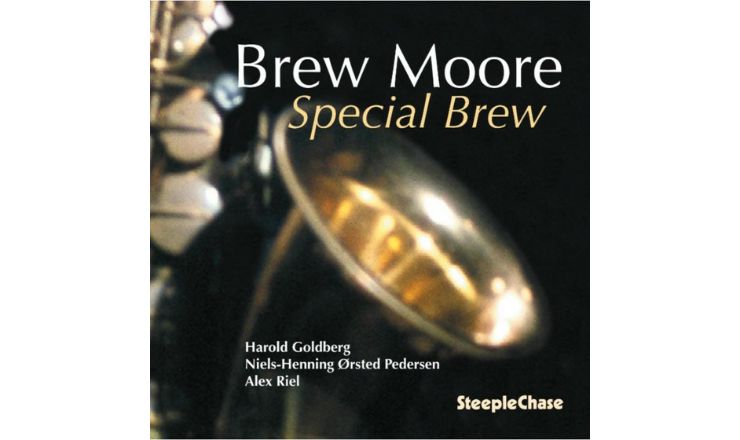 Together, Brew and his team breeze their way through a likeable and engaging programme of music…

As every conscientious student of jazz history knows, Brew Moore (1924-1973) was an avid disciple of Lester Young whose relaxed, smooth style he regarded as the epitome of tenor sax expression. From the outset of his career, whether in big band or small group settings, he remained cool and consistent, never varying from the style he so venerated and when his American audiences became enthralled by the sounds of the new wave he moved to Europe where people were still listening.

In this CD he is captured in live and studio performances shortly after his move to Copenhagen, where he was to remain until his death. Although these sessions tell us nothing new about his work they are valuable because he made relatively few recordings in this final phase of his career and like the others they are a fine example of his chosen aesthetic; solid, swinging, unpretentious melodic extemporisation on familiar tunes in blues and bop formats.

His band on this occasion features one Harold Goldberg on piano, part owner of Copenhagen’s premier jazz venue, `Jazzhus Montmartre` and one-time accompanist to Dexter Gordon and Lady Day He turns in a reliable, boilerplate, Bud Powell style of playing pepped up with the odd, wittily contrived quotation and although his powers of invention don’t match the leader’s in terms of free flowing eloquence, it’s by no means a shabby performance.

On the final and titular track, he takes up his other instrument, the tenor horn, which sounds very much like a trombone, coming over rather like Bob Brookmeyer did in his Californian combo with Stan Getz.

The big surprise of the session is the presence of a fifteen-year-old Niels -Henning Ǿrsted Pedersen on bass; one marvels at the precocity of his talent, not least the fact that he was allowed to say up so late. Although his technique here isn’t quite what it would become the maturity of his solo work is remarkable in one so young.

Along with the similarly youthful Riel -only 21 at the time of this recording – they would go on to form the house rhythm section at the `Jazzhus` and gain international renown through their employment with the Oscar Peterson Trio.

Together, Brew and his team breeze their way through a likeable and engaging programme of music which includes such dependable material as `I Want to be Happy`, `Scrapple from the Apple`, `Yardbird Suite` plus a ballad and a couple of blues.

Steeplechase are to be congratulated on bringing this valuable session out of obscurity, reminding us of the virtues of a musician who should have gained the wider recognition he justly deserved.