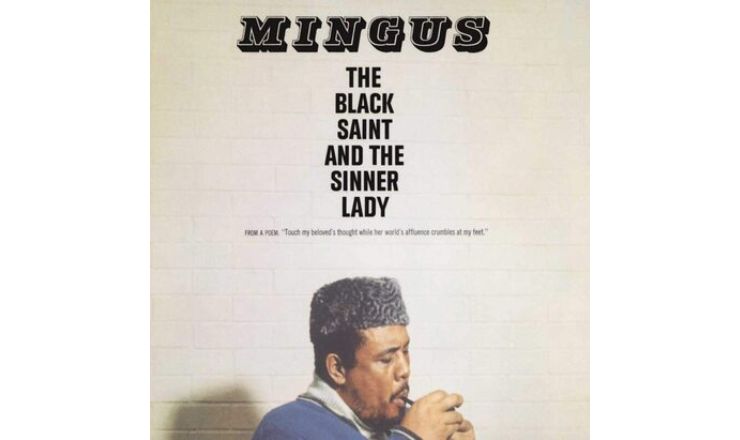 Mingus was not an easy man. He was big, volatile, opinionated, insecure, combative. His personality caused problems with making relationships and because of that his growth as an artist never came easily. He did not just bite the hand that fed him, he sometimes severed it at the wrist.

In 1962 Mingus persuaded a record company that he had some unique work ready and it was probably best to form an orchestra and record the new work at the Town Hall, New York City. The concert was a massive shambles. The blame for the debacle is still argued about. People walked out, demanded their money back, the recording equipment did not arrive and the hall was not suitable for a major recording. Not enough time was given for rehearsal. Musicians were still copying out music and there was not enough music.

Later, Bob Thiele of Impulse records heard some of the music and went to hear Mingus playing at the Village Vanguard. Mingus, undeterred by the failure of the concert, had formed a new group. Mingus who idolised Duke Ellington had persuaded Quentin Jackson, one of Ellington’s trombonists to join him. Jacki Byard who had worked with Mingus at the ill-fated Town Hall concert was on piano. Stan Kenton alto player Charlie Mariano was teamed with Dick Hafer on tenor. Dannie Richmond was on drums. The group was playing an early version of ‘The Black Saint and the Sinner Lady’. Thiele saw the possibilities and decided to record the group.

It was not a normal recording. Unusually for jazz at that period, the eventual music was quite heavily edited and some of the playing was dubbed on sometime later. Brian Priestley in his book on Mingus points out ‘The Black Saint marks the first occasion in any field where the combination of overdubbing with “creative editing actually determined the nature of the product’. The music came from a balance between the ideas of the composer and the spontaneity of the players.

The album consists of a single continuous composition—partially written as a ballet—divided into four tracks and six movements. It was the record company who wanted the split between the sections in the hope that parts of the suite might be played on the radio.

Themes played at the beginning occur again later. Three tempos are used together with accelerandos, retards and rubato. A slow piece opens the second movement which leads to an alto solo from Charlie Mariano. The piano solos in the third movement are actually Mingus and not Byard. Increasing the Ellington effect is the use of plunger mute specialist Quentin Jackson who fulfilled that role with Ellington for many years. However, Dannie Richmond is most unEllington. His rhythmic skills make for restless urgent rhythms which dominate parts of the music.

Mingus arranged the saxophones with a baritone lead rather like an Ellington saxophone section. Mingus explains: ‘The three reeds, baritone – Jerome Richardson, tenor – Dick Hafer, and alto – Charles Mariano, were placed in what I called a V balance with the tenor sax at the V’s bottom and the baritone and alto closer to the mike. My reason was that I wanted the tenor sax further from the mike, softer of course, if one is inclined to believe that presence need be obvious. The notes written for tenor were considered in the voiced reed section’s overall effect as an illusion of sound-overtones coming through between the baritone and alto that are non-directional so as to give the sound of more than two obvious saxes playing but with possibility of being perhaps four or five.

In reverse, if my tenor sax were as close to the mike as my alto and baritone there would be three saxes obviously playing when sometimes I wanted the illusion of more than three. There are at least three perfect overtones that normal ears hear. I was more concerned that the overtones be heard, that one loud tenor note blending with alto and baritone closing out its overtones.’

Don Butterfield on tuba and contrabass trombone gives the music richness and depth. The use of guitarist Jay Berliner gives the whole piece a unique flavour. Mingus intended the Spanish guitar to mirror the period of the Inquisition and El Greco’s pictures of oppressive poverty and death. Mingus explained: ‘I wrote the guitar solo; Bob Hammer wrote the one bar modulation going into and the two bars leading out of the guitar solo on the B side from a Spanish piece I’d written some time before. However, Bob Hammer will be fully represented on my next album for Impulse due to the fact that he is one of the few musical people besides Roland Kirk who came to New York City knowing my music that he’d heard on records.’

Mingus acknowledged the role of Impulse’s Bob Thiele. ‘This is the first time the company I have recorded with set out to help me give you, my audience, a clear picture of my musical ideas without that studio rush feeling. Impulse went to great expense and patience to give me complete freedom, along with engineer Bob Simpson, for balance and editing’.

However it was arrived at, ‘The Black Saint and the Sinner Lady’ is music that acknowledges the past and looks forward to the future. It is vivid music with unique flavours that sounds as good and vital today as it did in 1963. It blends all of the different voices as they interweave restlessly, dynamically, changing, powerfully, animated by love, passion and belief. It could be Mingus’ most complete statement.