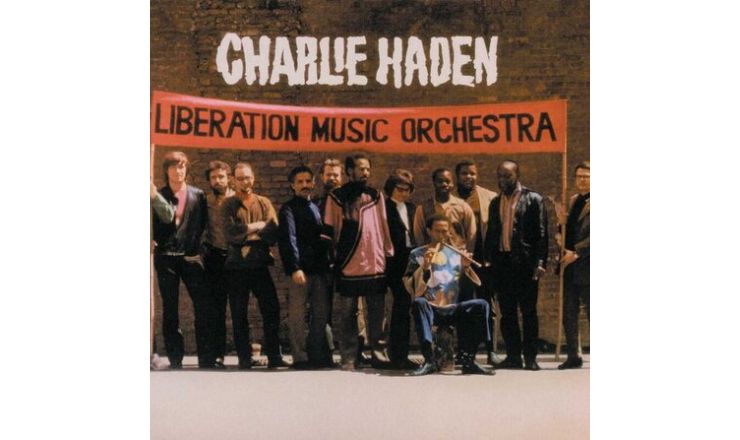 Should music have a political stance? Can music be polemical? Max Roach with ‘Freedom Now’, Charles Mingus with ‘Fables of Faubus’, Louis Armstrong with ‘Black and Blue’, and Billie Holiday with ‘Strange Fruit’ have all used music to register protests. The messages from those artists were around race; Haden’s message had a wider political sweep. America in the sixties was fragmented with demonstrations and protests, some of it racial, most of it political. President Kennedy was assassinated and so was his brother, Robert. Martin Luther King was shot. The Vietnam war was going badly. Mass protests were commonplace. Haden felt that there should be some way of using music to support the protests about the US actions in Vietnam.

Haden said: ‘The album was conceived when Nixon bombed Cambodia. I called Carla Bley and said, ‘I want to do a record of political songs’’. Jointly they developed the idea of the Liberation Music Orchestra. Initially, they decided to build a suite around folk songs from the Spanish Civil War: ‘El Quinto Regimento,’ ‘Los Cuatro Generales’ and ‘Viva La Quince Brigade’. Eventually, Haden contributed two pieces, Carla Bley three, Ornette Coleman’s ‘War Orphans’ was used as was the Brecht Eisler’ Song of the United Front’. That anthem had been composed in the 1930s as a protest against the Nazis.

At the recording in New York there was a small audience: Gil Evans was there, Carla Bley remembered: ‘There were other special guests as well—survivors of a legendary group of volunteers who fought in the Spanish Civil War against Generalissimo Franco. Charlie had also invited actual members of the Lincoln Brigade that were still alive to be in the audience. There were at least six of them with their wives, sitting there sort of scratching their heads, wondering what kind of music this was.’

Haden’s background was an unusual one. He started his musical life with the Haden family group. The family had their own country and western radio show. Haden sang with the group until he contracted polio which resulted in him losing his singing voice. He took up the bass and moved to Los Angeles in 1957 where he met up with Paul Bley, Don Cherry and Ornette Coleman. Haden first played with Ornette and Paul Bley in 1958 at the Hillcrest Club in Los Angeles. When Ornette moved east Haden went with him and they recorded the series of albums for Atlantic that revolutionised jazz. At the same time Haden changed bass playing.

‘I had to learn right away how to improvise behind Ornette, which not only meant following him from one key to another and recognizing the different keys, but modulating in a way that the keys flowed in and out of each other and the new harmonies sounded right. I really welcomed the challenge, because it meant using my ear, like when I was singing country music with my family on the radio as a child in the Midwest, and I had to know all the harmony parts — mine and everybody else’s — if we were going to blend. There was no such thing as ‘I don’t know them.’ You had to know them.’

Around this time Carla Bley was starting to achieve recognition. She had written ‘A Genuine Tong Funeral for Gary Burton. She was working on her opera ‘Escalator Over The Hill’. Her music had an individualistic core and she was adept at imbuing her music with a powerful voice. On this album she was helped by having musicians with distinctive strong voices: Gato Barbieri, Roswell Rudd and Dewey Redman. The admirable aspect is that Bley managed to yoke disparate elements together. ‘The Four Generals’ was a song about the fight for Madrid in 1936. The Spanish songs which are merged with 1930s revolutionary songs start with the guitar of Sam Brown. The acrid sonorities that Bley achieves are reminiscent of the sounds that Gil Evans evoked when he was reproducing the Spanish marching bands on ’Saeta’ in ‘Sketches of Spain’.

‘Song For Che’ was dedicated to Che Guevara the revolutionary leader who was killed in 1967 in Bolivia. The original had only been recorded a few weeks before with Haden and Ornette Coleman on the album ‘Crisis’. The piece became almost notorious when Haden played it in 1971 in Portugal with Ornette Coleman, then a fascist state, and he dedicated the piece to freedom fighters. The police arrested him, interrogated him and escorted him to the airport. On the album the depth, plangency and quiet dignity of Haden’s deeply felt anthem is eventually taken up by Dewey Redman and Don Cherry.

In ‘Circus ’68 ’69’ the musicians were divided into two groups in order to represent what happened at the 1968 democratic convention when delegates who sang ‘We Shall Overcome’ were drowned out by the convention orchestra who on the orders of the convention chairman were instructed play more conventional songs: ‘You’re a Grand Old Flag’ and ‘Happy Days |Are Here Again’.

The overt political content of the album did not please the higher echelons of the owners of Impulse, ABC, and the album did not receive much promotion on the initial release. In subsequent years the orchestra was reformed when Haden felt protest was needed. The last one ‘Time/Life’ was recorded around the time of Haden’s death and had a theme about the destruction of the environment. Haden died in 2014.

It is interesting to speculate what Haden would have created in response to war in Ukraine. Haden wrote about the original album: ‘The music in this album is dedicated to creating a better world, a world without war and killing, without poverty and exploitation, a world where all governments realise the importance of life and strive to protect rather than to destroy it. We hope to see a new society of enlightenment and wisdom where creative thought becomes the most dominant force in all people’s lives.’