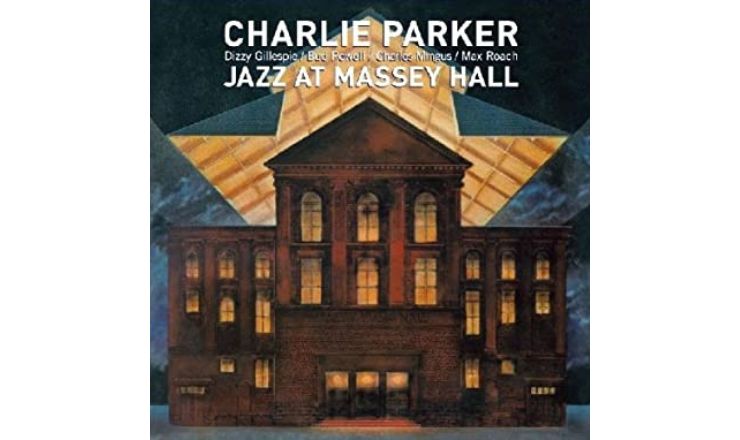 In the spring of 1953, the enterprising members of the Toronto Chapter of the New Jazz Society started to organise a jazz concert. They were ambitious; they booked the large hall and Dizzy Gillespie, Charlie Parker, Charles Mingus, Bud Powell and Max Roach. They even arranged for the concert to be recorded. What they were not to know was that later in the year the World Heavyweight Fight between Rocky Marciano and Joe Walcott was scheduled to be televised the night of the concert. That would eventually mean a half empty hall.

That was not the only problem. On the day of the concert, Parker had travelled up from New York with Gillespie and had gone missing in Toronto. Bud Powell had only recently been released from a mental hospital and, still in a fragile state, was accompanied by his manager. Parker eventually arrived and he took the stage with the rest of the group. He appeared to be in a dishevelled state clutching a white plastic horn, a Grafton acrylic alto.

A local Canadian group (the CBC All Stars) had been booked to open the concert. Eventually the American musicians took the stage. People in the audience had the distinct impression that the visiting American musicians had made little preparation. After a lengthy discussion they started with ‘Perdido’.

Taking the first solo after the theme Parker builds the intensity and in the second chorus he pushed hard. The third chorus has passionate double time of pure Parker melody before he ends with a figure that Gillespie echoes immediately. In his solo Gillespie quotes ‘Laura’. In the second chorus Gillespie opens up fully, the third chorus is emphasized by Roach and finally Gillespie goes all out to wind up the audience with searing high notes. Bud Powell’s solo is coherent and lucid and just as effective as Gillespie’s and Parker’s.

Parker introduces the second piece in his mock English accent. ‘At this time, we would like to play a tune that was composed by my worthy constituent, Mr Dizzy Gillespie, in the year of 1942. We sincerely hope that you do enjoy ‘Salt Peanuts’.

Max Roach starts off the strange piece before Parker and Gillespie play the theme in unison. There is interaction between the two before Parker’s intense three choruses. In the background Gillespie is yelling ‘Salt Peanuts’ over and over. In an ebullient mood Gillespie’s solo roars and leaps and he whips the audience up. Bud Powell has his own intensity and the notes cascade in the style that he had perfected. Max Roach has four choruses. He is a precise but passionate drummer who explores the nuances of all parts of his kit. The controlled wildness is never far away.

‘All The Things You Are’ was the third piece. Parker and Gillespie recorded the Jerome Kern piece when they recorded ‘Salt Peanuts’ In 1945. Here they followed the same outline. Parker manages to insert his signature quote from Kerry Dancers into his solo.

The interval was called after only twenty-five minutes of music. According to an interview with Max Roach, Mingus was angry with what had happened during the first few numbers. He had little solo space and he criticised the others for playing routines that they knew and which Mingus was not familiar with.

Parker and Gillespie returned to the stage after an hour’s break. In the meantime, the Bud Powell trio had played a set (issued on a separate CD). Parker and Gillespie, refreshed, opened with ‘Wee’ played at super high tempo. It suited Parker, his solo burns with vitality, invention and high-speed eloquence. Parker is one of those soloists who in spite of the fast tempo can seem relaxed and able to. Introduce his own unhurried variations. The Gillespie solo that follows does not quite match Parker.

‘Hot House’ is based on the tune ‘What Is This Thing Called Love?’. Parker’s solo brings in his characteristic musical devices playing in different tempos quoting from Bizet’s ‘Carmen’. Gillespie in his best solo picks up on the quote from Carmen, embellishes it by playing it and then repeating it an octave higher. It is his best solo of the evening.

‘A Night in Tunisia’ or as Gillespie announces in deference to the French Canadians: ‘Ce Soir en Tunis’. Parker’s original recording of the theme with its break after the theme statement became legendary, because he packed so many notes into a short space. At Massey Hall the break is not as intense. His closing phrase is picked up by Gillespie whose solo is magnificent.

Throughout the concert the intelligent drumming of Max Roach energises everyone. His style, the precision, the musical use of the kit and the controlled ferocity of his solos are an essential element.

After the concert the ownership of the tapes was soon disputed. Mingus claimed ownership for the Debut company that he had set up with Max Roach. There was a problem with Parker who was contracted to Norman Granz. Eventually, when the album was issued, Parker was referred to as Charlie Chan. Worried about how the bass sounded on the recording, Mingus eventually doctored the tapes to boost his own role. Finally, because of the sparse attendance there was a dispute about payment to the musicians. Showing real guile, Parker was the only one who managed to get paid.

All these minor matters apart, this is a remarkable historical document full of vital exciting music which gave listeners in Europe the chance to hear Parker and Gillespie free from the studio and the restriction of 3 minute 78 rpm records. In 1953 there were very few bootleg recordings in general circulation with chorus after chorus of free-flowing Parker. The playing of both Parker and Gillespie on this album was a revelation with improvised music bursting with energy, creativity, invention and daring. Parker still had his stunning virtuosic skills, could play at rapid tempos, could deploy double timings, his melodic creations were razor sharp.

The concert has been issued many times with different labels. One was ‘The Greatest Jazz Concert’: a silly title! Whatever happened on that night in1953, there was magnificent jazz music from five of the greatest players that still sounds thrilling nearly seventy years later.