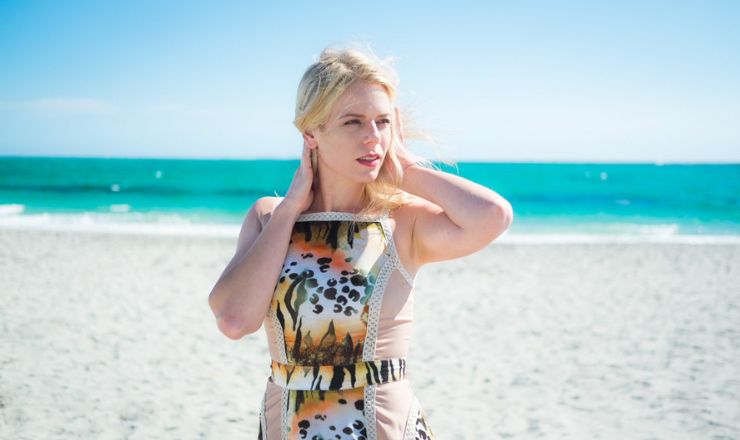 After listening to her eclectic and joyous new album, I had so many questions lined up for Georgie Aué regarding her creative process and how such an assortment of styles and genres came together to become Desert Cry…

In your own words, what story does ‘Desert Cry’ tell?

The album Desert Cry tells a few different tales – some stories there had been buried for years in my memory (Waiting for You is a track that springs to mind), whilst others are observations of long-time friends (Falling Out of Love).

There are also hints of protecting the environment there too. I grew up in the Blue Mountains in New South Wales, Australia where the threat of fires was very real.

In 2020 the area almost burned to the ground – remarkably, it didn’t, to be honest. While everything I’ve mentioned so far feels quite serious, there are many joyful songs on the album – my love of Brazilian music was explored, and I’ve even started delving into Afro-beat style music with the title track Desert Cry.

What does the album represent for you?

The album represents the culmination of my original ‘voice’ to date – my various tastes and music curiosities were followed, and I had the best time putting together the music even before anyone started playing it! I had a lot of ideas and other songs that didn’t make it into the album, but the process was so fulfilling.

It also was the first time I recorded with these musicians. I’ve been playing with them (especially the rhythm section) for a few years since relocating to Perth, Western Australia (WA) from Melbourne. So, it also represents a body of work that has been created with some really special musicians and collaborators.

What was your favourite moment when creating the album?

There were a few!

But I think perhaps it was the magic of the first recording rehearsal with the band and realising that Desert Cry was going to be the title track – that to me was a defining moment in the process. I had written an average single guitar line and said to Jeremy (guitar) ‘to muck around with it and what he, Zac (bass) and Daniel (drums) came out with just helped set the tone for the whole track.

The other most amazing moment was finding out that I was the recipient of a grant from the WA state government (Department of Local Government, Sport and Cultural Industries), which meant that I was going to be able to record the album and make it happen the way I wanted to.

I think I screamed (in happiness) when I found out!

Which song do you connect with most on the album?

Ah, that’s a hard one. I connect in various ways to all the tracks on the album.

I think ‘Waiting for You’ is a particularly powerful one for me and sort of propelled me to put together this body of work. It was written in the height of the lockdowns in mid-2020 when we all maybe had too much time to think, and I went down memory lane.

I didn’t mean to write this song, but I woke up one morning after dreaming and the first thing I did was write the lyrics that were almost as they are on the recording. Song writing has always been a creative and emotive outlet.

Were there any big changes in your creative process in comparison to the process taken on your last two albums?

Creatively I think I went about it in the same way that I normally do – going through periods of consciously writing and composing and doing it more routinely. And then there were periods that I wrote more as it ‘came’ to me. A difference was that early on I decided I’d have a horn section, which drove some tracks in a certain direction.

Another difference is that my younger sister (Bonnie Aué – wonderful, young bass player) was great to bounce ideas off and so I’d drive her mad and send her snippets of songs (throughout COVID) and lament about a section that ‘wasn’t quite working’ and what her thoughts might be.

The horns are a prominent feature of the album. What was it like collaborating with Max Grynchuk and your father in creating these arrangements?

It was wonderful! It is like handing over ‘your baby’ to an extent but I was so excited to hear what they would do with it.
I have a great appreciation for the expertise of arrangers – it’s an incredible skill! I arranged the horns on ‘Come to Brazil ‘and ‘Desert Cry’ but on the other tracks where the horns featured, I wanted some input and some external creative energy.

I had a good idea of which tracks would suit my father and chose accordingly. He really is the master of arranging subtlety and what he produced is so effective.

I also had an idea of Max’s sound (Eraser Description, Hilltop Hoods, his own Big Band) and really wanted a full sound for those tracks. He delivered in spades – I’m absolutely thrilled with the final result.

How would you define your musical style?

My musical style is danceable, groovy, and soulful!

I love artists such as Joni Mitchell, Eva Cassidy; Earth, Wind & Fire, and Stevie Wonder, but my real passion lies with the Bossa Novas and Sambas from the late 50s – 70s – Sergio Mendes, Elis Regina and AC Jobim are my absolute favourites!