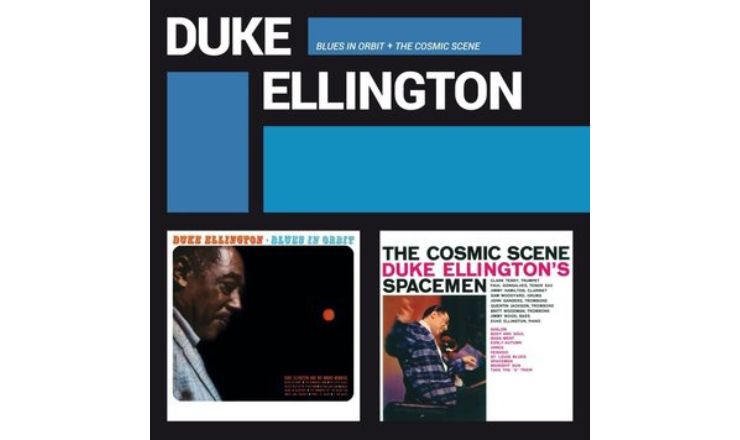 The late 1950s was a splendid time for Ellington; his orchestra had wonderful soloists Ray Nance, Clark Terry, Quentin Jackson, Johnny Hodges and of course the wonderful saxophone section. Ellington was producing new work constantly. Teo Macero who produced ‘Blues in Orbit’ over two nights in 1959 notes that this ‘is largely a Blues album and the music does have a very pleasant relaxed feeling. Ray Nance is the only trumpeter but the sound is of a full band.

One of the most distinctive tracks is ‘Blues in Blueprint’ it was one of those pieces recorded once and never played again. Harry Carney on bass clarinet threads his way carefully through the theme and creates something that is pure Ellington, a kind of new ‘Mood Indigo’. In the first chorus bass and bass clarinet pick out the harmonic theme accompanied by Ellington finger snapping; the centre section is another Ellington wistful melody. The final very Ellingtonish chord at the end is played by Billy Strayhorn.

One unusual piece is called ‘The Swingers Get The Blues Too’. Matthew Gee plays a baritone horn contrasting neatly with a solo by Johnny Hodges.

‘Track 360’, there are three versions, is another Ellington train piece and it’s by the full band with Sam Woodyard shuffling long. Other pieces that have alternatives are ‘Smada’ and ‘Brown Penny’.

Cultivated clarinet player Jimmy Hamilton is featured on ‘Three J’s Blues’. Hamilton here is playing tenor and it is interesting to note the difference between his raunchy tenor playing and his usual polite clarinet offerings.

‘C Jam Blues’ is one of the best versions of the much recorded theme. The soloists are Ellington, Ray Nance on violin, Booty Wood on trombone Jimmy Hamilton, Matthew Gee as well as Paul Gonsalves.

‘The Cosmic Scene’ was recorded largely in 1958. Ellington chose eight musicians and took them through some classic non-Ellington titles like ‘Avalon’ and ‘Early Autumn’. One of the most attractive pieces is ‘Jones’ There are two versions and it moves along melodically and majestically with a solo by Paul Gonsalves. Gonsalves is also featured in “Body and Soul’.

The recording is late fifties stereo when engineers gloried in the wide separation that they could achieve, unlike now when audio engineers seem to strive to make everything sound like mono. No such nonsense here. There is a right and left and never the twain shall meet. The sound on ‘Blues In Blueprint’ is spectacular in the way that it captures nuances.

In the album notes Teo Macero who produced ‘Blues in Orbit’ gives some incidental details which might account for the special generous relaxed atmosphere. The session started at midnight and at 2 am Ellington stopped for a meal: ‘The sizzling steak arrived with two portions of American cheese, two halves of grapefruit, one large jar filled with black coffee and two halves of lemon.’ This is off-the-cuff music played with a good humour, creativity and ebullience and is probably one of the most enjoyable sessions in the whole of the Ellington discography.