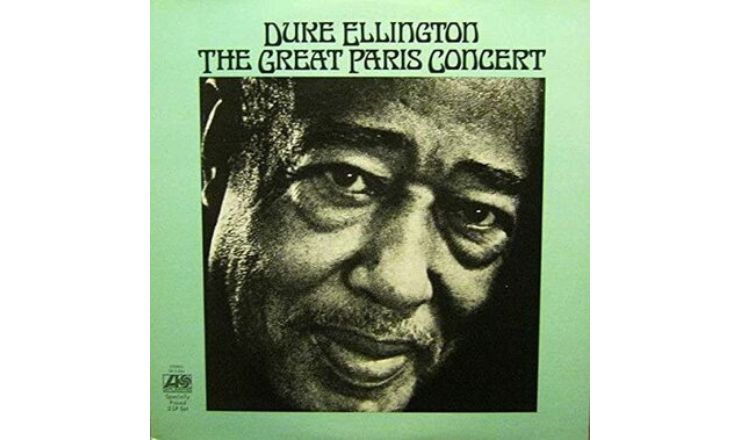 This wonderful example of the great Ellington Orchestra of the sixties was recorded over three nights at The Olympia Theater in Paris during February 1963. Although perhaps lacking the panache of the forties aggregation or the sheer pungent jungle like sounds of the late twenties Cotton Club Orchestra, Duke and his men still had very much to offer. Many of the great giants of Ellingtonia were still there including probably the very greatest reed section that ever existed in big band jazz. Perhaps it is best to listen to this music as one complete concert and forget that it was taken from the three separate performances some fifty seven years ago. The atmosphere was electric and almost jumps from the vinyl as Duke and his men wow the crowd at every turn in the most iconic venue for jazz that France had to offer.

Things kick off, as so many thousands of Ellington concerts have, with the mystro’s piano introduction to Rockin’ In Rhythm which eventually was given its own name Kinda Dukish, although in this case Duke goes out on a limb, as he could at will, to give a version that could easily be described as “Duke plays Monk playing Duke”. When it comes to the main event Cat Anderson takes to the stratosphere of the high note trumpet under Mr Ellington’s verbal encouragement. Following this early excitement there is a wonderful three number interlude, including the magnificent Star Crossed Lovers lifted from the Shakespearean Such Sweet Thunder album featuring the great Johnny Hodges, here on superb and succulent form (when was he not?) proving once again that there are few if any other alto saxophonists with such a beautiful and compelling sound as “The Rabbit” or “Jeep” as he was sometimes known. Side one of the album closes with one of Duke’s forays into film and television, the theme to the nineteen sixties series The Asphalt Jungle with the saxes in unison, as only they could be, on the title cut.

Its Cootie Williams time to shine as side two gets underway with two pieces written for him by Duke with help from Jimmy Hamilton. Firstly its the more well known Concerto for Cootie which finds the lead trumpet man squeezing every piece of emotion he can find from his muted horn before the more uproarious Tutti For Cootie with the leader himself providing an ideal foil above Sam Woodyard’s incisive drums. Duke composed many longer works during his illustrious career, perhaps some of the shorter but still extended pieces have been somewhat forgotten. The Toga Brava and Perfume suites are good examples. On this occasion we are treated to the four part Suite Thursday of seventeen minutes duration and premiered at the 1960 Monterey jazz festival to coincide with the publication of the John Steinbeck novel of the same name. The writing was a joint effort between Duke and his alter-ego Billy Strayhorn. Its profound and somewhat modernistic at times with the Duke particularly on great form himself. Even with Paul Gonsalves also on top of his game and a fine contribution from Ray Nance on violin, the critics and jazz police of the seventies were not over impressed. I think things would be quite different in today’s climate where the appreciation of great jazz that requires more than a passing listen is far more appreciated.

Moving to side three, the band start with the old warhorse Perdido from the pen of Portarican trombonist Juan Tizol. This is a classic piece from the orchestras song book but played in a very updated fashion for the times, with only small hints of the theme emerging now and again. Jimmy Hamilton and Paul Gonsalves take center stage here before the whole things segues perfectly into the next number the mysterious and exotic Eighth Veil with Cat Anderson’s trumpet in the lead role. Lawrence Brown’s agile and velvet sound is up front in a rare outing for Harry Warren’s fine tune Rose Of The Rio Grande. Duke did not play too many songs from other composers, perhaps because he had so many of his own, but when he did they almost always sounded “Dukish” anyway. The heady rip-roaring Cop Out was next on the menu, once more with Gonsalves tenor to the fore, but this time at least equaling his legendary performance of Diminuendo And Crescendo In Blue at the Newport Festival in 56. Described by Ellington as “A Gut Bucket Bolero, played in a pre-primitive fashion”, Johnny Hodges takes to the solo microphone on the intriguing Bula as the side comes to a close.

Harry Carney is first up in a long round of featured soloists as side four opens with the rousing flag waver Jam With Sam, Duke introduces each player with their name and place of birth on a number that would perhaps be a little more appropriate as a concert opener or even closing number. Happy Go Lucky Local is one of the Ellington masterpieces of musical description. Here we have a local train making its journey home full of raucous passengers, its depicted brilliantly with an atmosphere and superb section work that only this band could muster, the final exclusion of steam being handled by the mighty Cat Anderson as the train finally arrives at its destination. In somewhat the same musical vein, but of a much darker nature is the final number, an extended version of another mighty composition Tone Parallel To Harlem. This was composed in 1950, originally for the NBC Symphony Orchestra, then under its conductor Auturo Toscanni. Because of the initial concept there is very little solo space included but it is in every way a masterpiece with once again the leader showing his unique skills in arranging for collective brass and reed instruments, punctuated by mood changing interjections from the rhythm section. Such is the intensity of the score here that that it is very easy to feel that the listener themselves is being transported along Malcolm X or Fredrick Douglas Boulevards, or even West 125th Street to the Apollo Theater itself.

In summary, a wonderful live album from one of the greatest jazz orchestras of all time under a giant and cornerstone figure of the music. Does it stand the test of time after all these years? It surpasses it.