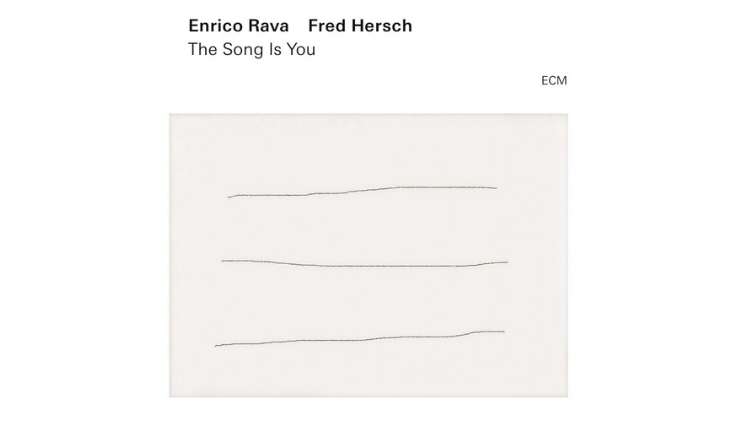 Astonishingly this is the first time that Enrico Rava and Fred Hersch have been in a recording studio together, and the resulting album is exceptional.

Here are two musicians who sound as if they were destined to play together. So in tune are they with each other’s playing that they can take the music anywhere they may wish to, yet there is nothing predictable about the music performed.

Some of the tunes are familiar, even to the point of over exposure, but in the hands of Rava and Hersch it is almost as if hearing them for the first time.

Recorded after just a handful of Italian dates the music sounds fresh and exciting, and the sense of discovery in each others playing is audible.

Hersch has said that in the best duos there is very little requirement for verbal communication, and listening to the music unfold the communication appears moment to moment in each of the compositions performed.

The pairing of Hersch’s extraordinary prowess at the keyboard, and Rava’s ravishingly beautiful and fluid flugelhorn are a match made in heaven.

The choice of repertoire is inspired with a selection of standards and an original composition a piece by Rava and Hersch, and every piece appears to be complete but leaving one with a sense that there is more to be said.

There are two Monk tunes back to back that convey the music in such a way that is crystal clear.  On ‘Misterioso’ the playing is less expansive than elsewhere, almost as if stripping it back to basics, but the message so concise and clear from both.

If Hersch’s playing is less busy, Rava’s flugelhorn is positively sparse and fragmentary, and when allowed to flow are wonderfully supported by the pianist.  as if the two musicians are having a conversation about the tune, and what can be done.

The pianist gets ”Round Midnight’ to himself in a reading that retains so much of composers intent while also being remarkably fresh and exploratory.

Of the originals, Rava’s ‘The Trial’ is tantalisingly brief, while ‘Child’s Song’ by the pianist is one of those delightful melodies that lingers in the mind.

No mere surface gloss, the duo give the piece a quiet yet thorough investigation. Reva’s flugelhorn phrases being teased and cajoled by Hersch’s choice of lyrical playing coupled with some plucking of strings inside the piano.

The playing on this piece could easily be the choice cut on the album, but the playing of both throughout is of such a high standard that it is just one highlight of many.

Jobim’s ‘Retrato em  Branco e Preto’ is exquisite with both musicians so deep in conversation it is as if as a listener we are eavesdropping.

Hersch explains his love of the duo as leaving him free to play orchestrally and able to add counterpoint with two melodic lines working together alongside the flugelhorn.

Hear how the two musicians work intuitively together on the title track, each working within the composition yet finding so much space and so many new things to say.

A beautiful and deeply passionate album that hopefully signals the beginnings of a fruitful collaboration between two master storytellers.