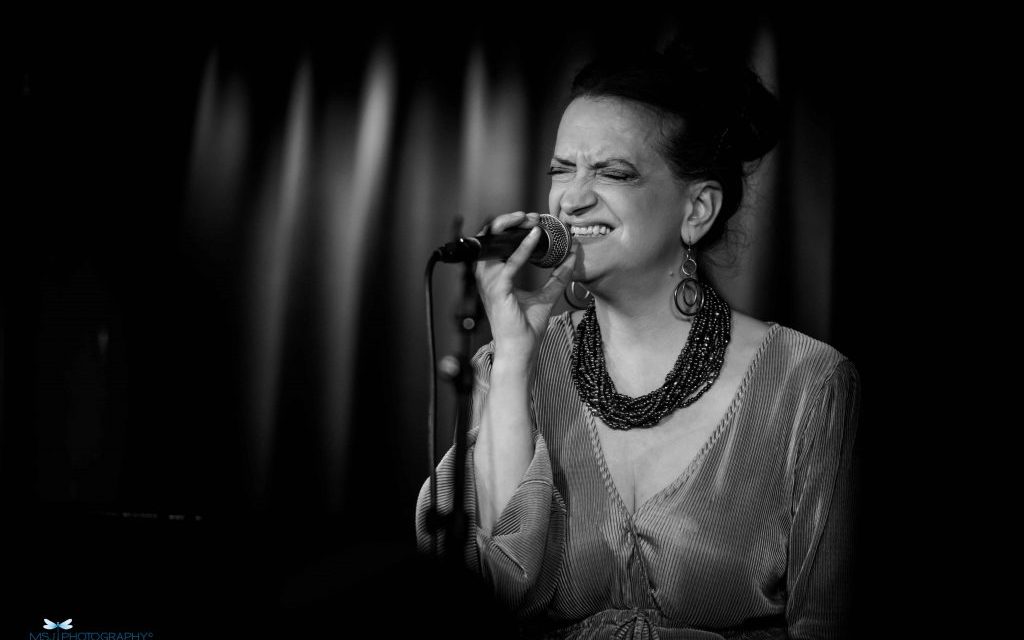 This album represents where I am now and that Art really does come from one’s own experience and from whatever it is (at any given time) that one considers, or once considered to be “home”.

Esther Bennett is renowned and respected in the UK jazz scene, known for her charismatic and quirky performance style and distinctive vocal spark. Her newest release touches on her Birmingham roots, as well as her family connections and musical inspirations. After listening to this compilation of jazz standards, spoken word and original compositions, I felt drawn to ask her more about her overall creative process and what led her to take her chosen artistic route…

Firstly, what led you to start the album based on your Birmingham roots?

The first track on the album is a spoken word piece about my Birmingham roots.

Several things drew me to this theme all of which occurred during lockdown and all of which were based around researching my personal experiences and memories:

iii) Terence Collie invited me to feature in his Mood Indigo Livestream Event “My Life in Music” (https://youtu.be/T_M3WGBL3Jk). This was where, once again, I discussed the influence of Birmingham on my musical life.

So, over the pandemic I spent a lot of time researching the music of Birmingham on google and YouTube and revisiting and photographing Birmingham during the periods when lockdown was lifted, all with a particular interest in the industrial areas with their factories and pubs – be they derelict, still in use or reinvented

What was it like for you to bring all these nostalgic and emotional themes together?

I felt that it really defined me as a singer and as an artist and defined my sound, style, and songwriting. I’d never really analysed how my Birmingham roots and its musical heritage had shaped me until this time. In a radio interview a few years ago the radio presenter said that they could hear those Bluesy Birmingham tunes in my singing but, I’d never really thought about it until I started researching this track.

The spoken word element is a prominent part of the album. What made you decide to go down this artistic route?

I’d been listening to the compositions of Didier Messidor, a musician and painter whom I have known for many years.

I actually used one of his artworks for the cover of my 2021 EP release “Safe Places” and I decided that I wanted to put words to some of his musical pieces.

Didier composes for film and television and so his compositions are beautiful and atmospheric cinematic soundscapes. I felt, therefore, that lines of poetry or spoken would work far better than the traditional song format.

When my mother died my dad gave me an envelope with some poems that she had written in it. I’d always wanted to do something with them, and this felt like the right opportunity. I also wanted to write a piece about my dad. I was with him in his final days, and I wanted to honour that and him This album is very much a labour of love.

I wanted to reflect my roots and my love and respect for my parents, and it seemed more appropriate and less “over-sentimental” to do so with spoken word and poetry rather than in song.

Another reason for this choice is that I am also interested in avant-garde and improvised music and the spoken word and poetry elements allow me to play with words, phrases and sounds which also means that each live performance of these pieces will be different and have elements of improvisation.

How does this album differ from your previous releases, and what does it represent for you in your own musical journey?

Apart from the addition of poetry and spoken word, this album differs from any of my other recordings in that it is intensely personal. My parents died quite a few years ago, ten years apart. First, my mother and then my father and I left Birmingham for London over a decade before this. It’s taken me a long time and I’m at an age and stage of reflection.

This album represents where I am now and that Art really does come from one’s own experience and from whatever it is (at any given time) that one considers, or once considered to be “home”.

The ‘Lush Life Medley’ features Billy Strayhorn’s ‘Lush Life’ of course, but what led you to combine it with Amy Winehouse’s ‘Love is a Losing Game’?

They are both works of pure genius written by artists who at the time of writing, were incredibly young but with very old souls. I felt that the lyrics blended and were seamless in that the section from “Love is A Losing Game” did not interrupt the lyrical flow of “Lush Life” and made lyrical sense as one complete song. I felt that Amy’s song complemented Billy Strayhorn’s absolute jazz classic.

Which track was your favourite to work on? (If you can pick a favourite!)

It also seemed so relevant to bring it out in 2022 – the year the Commonwealth Games were held in Birmingham. Terence Collie and I liked the track so much that we made a video to complement it and we are really proud of that too.

It is a contrafact of the well-known jazz standard “All of Me” (hence our traditional musical approach to it) and it was the first song I wrote at the beginning of lockdown. It is intentionally both clinical and quirky and was fairly difficult to execute. In retrospect…. a definite sign of the times!

Do you have any idea of what you would like to do next after the album is released?

To get as many gigs as possible, where we can perform these and other songs from my catalogue of recordings. What’s interesting and new (for me) about the spoken word and poetry is that they will be the freest and most improvised of pieces when performed live.

No chord charts and no specific tempo. That was my intention. I have a couple of other album projects up my sleeve but, more of that later.