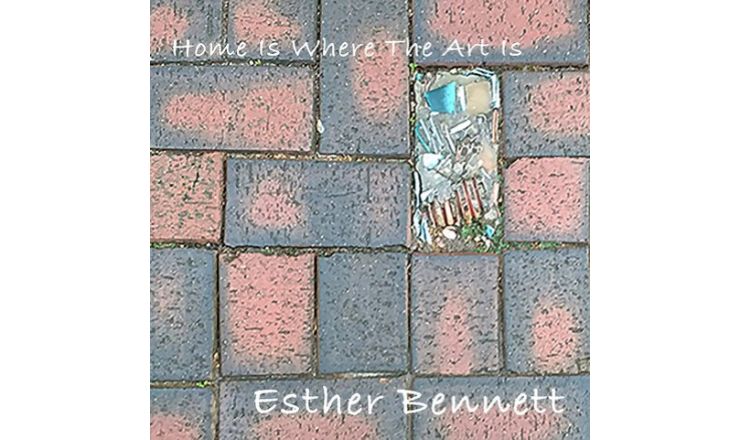 An album that takes the listener through different emotions and storylines.

Esther Bennett is known as ‘one of the jazz scene’s most experienced, highly respected and widely loved vocalists.’ She began her impressive career as a saxophonist studying in London but turned to singing when she struggled to keep up with the instrumentalists around her. Bennett followed her calling, and since has become one of the most in-demand vocalists on the London jazz scene, and nationally.

After several memorable releases and projects that explore Bennett’s range of abilities and influences, she transports us back to her childhood in ‘Home is Where the Art Is’. This nostalgic and inciteful album highlights Bennett’s experiences and memories of Birmingham, her hometown and where she initially started her musical journey. The album was produced and recorded alongside Terence Collie and features the music of Didier Messidoro. This release brings her career in a wonderful full circle, taking herself and her listeners back to where it all began, making this album all the more special.

The first track instantly sets the tone for the rest of the album: a spoken poem over a tense and moody accompaniment of horn stabs and held chords. Over the two years of lockdown, Bennett visited places of her past in and around Birmingham and became fascinated by the musical history of the city. The track has a driving force to it, pushed by a rhythmic shaker and repetitive horn motif, as well as the sounds of the factories and market traders. Bennett’s commentary also becomes more political at points, outlining the beauty of multiculturalism in Birmingham, along with an accompaniment that’s described as ‘the music of the immigrant workers… a sound that is intrinsically the Sound of Birmingham’.

Bennett’s spoken word over a blanket of sounds and motifs becomes a recurring feature throughout the album, tying all the tracks together and taking the listener on a journey as each song plays.

The ‘Lush Life Medley’ is a drastic contrast to the chaotic and ominous feel of the first track. The piano begins with a delicate and relaxed introduction, as Bennett’s take on Billy Strayhorn’s standard ‘Lush Life’ unfolds. Bennett’s vocals transform this well-known tune, as she hovers on each note with her recognisable vibrato, giving added importance to every corner of the melody.

The piano seamlessly travels between each tune in the medley, with brief, calming melodic interludes. The medley subsequently pays homage to the late Amy Winehouse in a moving cover of ‘Love is a Losing Game’, which then smoothly leads back into ‘Lush Life’. It is evident that these songs are both poignant and meaningful for Bennett, as she performs with such feeling and grace.

‘Rio De Janeiro Blue’ is much groovier and rhythmically driven in nature, bringing out Bennett’s vocal charisma and sparky sense of humour. The song features a soft and floaty flute solo by Duncan Lamont Jr., which fits the feel of the music perfectly, along with an explorative electric piano solo. The song appears on one of Bennett’s favourite albums, Randy Crawford’s ‘Secret Combination’, and she wonderfully does the song justice whilst also putting her own charismatic twist on it.

‘Suppose’ explores the depths of Bennett’s mother’s poetic writings, making this a beautiful ode to family and loved ones. This particular poem was paired with one of Didier Messidoro’s moving and sentimental compositions. The minimalistic accompaniment brings attention to Bennett’s words and her ability to make her spoken tone a musical instrument in itself, heard in her rhythmic pronunciation and breathing.

‘Mother’s Yorkshire’ follows a similar formula, with a poem written by Bennett’s mother describing her much-loved childhood home in Yorkshire.

‘The Maintenance Fitter’ is another track on the album driven by Bennett’s distorted, telephone-like spoken word. This was a piece she wrote for her father, in the last week of his palliative care up until his passing away. The words go through this new-found awareness of how the human body works, particularly when it begins to break down. Bennett’s attention to detail makes this an extremely poignant moment on the album, further emphasised by the evocative chords and sound effects in the accompaniment.

‘Blissful Fool’ is another charismatic and light-hearted performance on the album. The bouncy piano and Bennett’s added accents and scat make the song all the more enjoyable. The song explores what happens scientifically in the brain when one falls in love, describing this process in a quirky and almost cynically, humorous way.

‘You Go to My Head’ is an ode to one of Bennett’s absolute favourite standards, and one that has existed within her repertoire since day one. This is the perfect way to round off this characteristic and unique album; an album that takes the listener through different emotions and storylines. Bennett has once again created something truly compelling, something which is not afraid to push boundaries and form a new art.