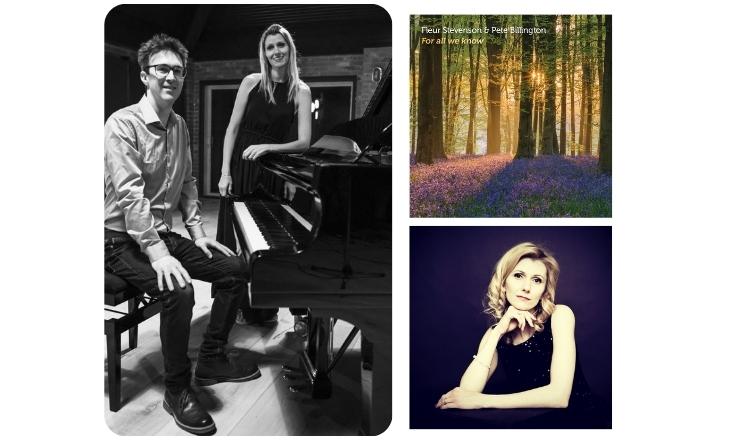 After listening to their newest release, For All We Know, filled with nostalgic and heart warming jazz standards, I wanted to know what led these two incredible musicians to put these songs together, as well as how they came about re-arranging these popular tunes to make them wholly their own…

What drove you to want to release an album that was recorded live in the studio?

Fleur Stevenson: Following on from our last quartet album ‘Follow Me’, we wanted to create something a little more intimate and exposed – stripping back standards and rethinking tunes, inspired partly by Tina May and Nikki Iles’ album, ‘Change of Sky’. By recording these tunes live, I feel we have captured the intimacy, realness, and in-the-moment rawness of a duo.

Pete Billington: Being ‘in the moment’ is an overused phrase right now but that is what makes jazz so exciting to play and hopefully to listen to. There’s plenty of multitrack music that I love but the joy of a duo is responding to and being inspired by the other person so I can’t really imagine trying to record separately.

How did you decide on the arrangements for each track?

Fleur: The album consists mainly of ballads – our favourite ballads, but re-worked so that the listener hears the songs in ways they might not expect. Pete is an extremely talented arranger, fortunate as I am to work with him, and Pete took the lead with arranging these tunes – he’ll tell you more about the process.

Pete: Once we had a shortlist of tunes, we got together to discuss boring things like keys and forms but also what the lyrics meant and what feeling we wanted the arrangements to capture.

After that they developed quite organically. I wasn’t trying to force anything too clever on the tunes, just to find some ingredient whether it’s a riff, texture or just a harmonic flavour that was distinct for each track and set the atmosphere or emotion that we were trying to express for that particular song.

Why did you select these standards? Do you have a special connection to the repertoire?

Fleur: We picked these standards as they are all favourite songs of Pete’s and mine! In a genre as broad as jazz, we are fortunate that the repertoire is huge, so we are really spoilt for choice. I believe in only singing the songs that you really love and connect with. I adore each and every song on this album, and each one comes with its own meaning to me and I hope that comes across in the music. They are all special.

Pete: They really were just songs that we both liked. There wasn’t much agonizing – luckily, we both seem to like a lot of the same songs. The only criteria was that the lyric had to be saying something that resonated with us. There is quite a melancholic thread running through the album. I promise we’re both actually quite chirpy in real life but we do seem to love a tragic lyric.

What was it like working with Pete Billington and vice versa?

Fleur: Pete’s a good friend and we’ve been working together for many years; this is the second album we’ve made together. He knows my singing better than I do! He’s an incredible musician, skilled arranger and is very easy to work with. I’m not sure what he thinks of working with me, you’ll have to ask him! But he’s put up with me for this long, so it hopefully can’t be all that bad!

Pete: It’s a waking nightmare!…. But seriously, Fleur is great to work with. She really cares about the lyric and emotion of the song and is always listening. As an accompanist, it’s perfect because there is plenty to be inspired by and plenty of space to create. It feels like a partnership rather than one or other person dictating. And sometimes she brings cake.

Which song on the album is your favourite to perform?

Fleur: ‘I’ve got you under my skin’. I’m rather proud of this arrangement. I find the lyrics very melancholy and it’s satisfying to be able to perform our interpretation of this song and really connect with the lyrical meaning. Don’t get me wrong, I love Frank’s iconic swing version, but to me the words are heart-wrenching and sad and so that’s how we perform it.

Pete: I have to pick something different now, don’t I? I’ll go for ‘A Time For Love’. We both adore Shirley Horn’s version with strings and I think there’s a bit of the spirit of that album in our version. It offers so many options harmonically and I love the flexibility of tempo in the duo format.

How did you go about recording the tracks for the album? Did they take several takes or was it recorded all in one take?

Fleur: We took each song one by one, two or three takes of each, then decided which take we liked the best. Hard to choose, as each take had its own merits.

Pete: Choosing between the takes took a lot longer than recording them. We are both very bad at decisions. Next time I think we should just record for the day and let someone else choose.

Do you have any ideas for any future projects you would be interested in pursuing after the release of ‘For all we Know’?

Fleur: Pete and I have recently been dreaming up an idea of taking our favourite popular songs and re-arranging them into a jazz style, for example songs by Donny Hathaway, David Bowie, Randy Crawford. We dabbled with a few songs during lockdown. Let’s see what the next year or so brings!

Pete: Although we kept this album to jazz standards, our listening tastes are pretty broad, so it makes sense to bring in the songs we love from other genres.

It’s obviously not a new thing for jazz artists to record pop tunes but it’s important for me that any arrangements stay true to the spirit of the original while finding somewhere new to go through the improvising.

Is there anything that you’ve listened to this year that you’ve really enjoyed and would recommend to the Jazz Views readers?

Being a vocalist, naturally I love listening to other singers. Her new album ‘Meshuga Baby’ is incredible – great band and oh boy Emma’s got some serious chops! The arrangements are great, her interpretation of ‘There’s no business, like show business’ is stop in your tracks good! She has completely reinvented the song.

It’s a fine example of why I love jazz so much; you can take a song, often a very old song (add a splattering of your favourite influences, add lots of yourself) and make it your own – and that’s exactly what Emma has done. It’s fabulous.

Pete: I’ve been listening to a lot of Ahmad Jamal recently. In some ways his approach to the piano changes a lot between ‘At The Pershing’ and ‘The Awakening’ but the integration and awareness of both trios is inspiring.

Something I’m really looking forward to hearing is the release of a new recording of Stan Tracey’s Under Milk Wood that Clark Tracey has managed to unearth which features Kenny Wheeler alongside the original line up.