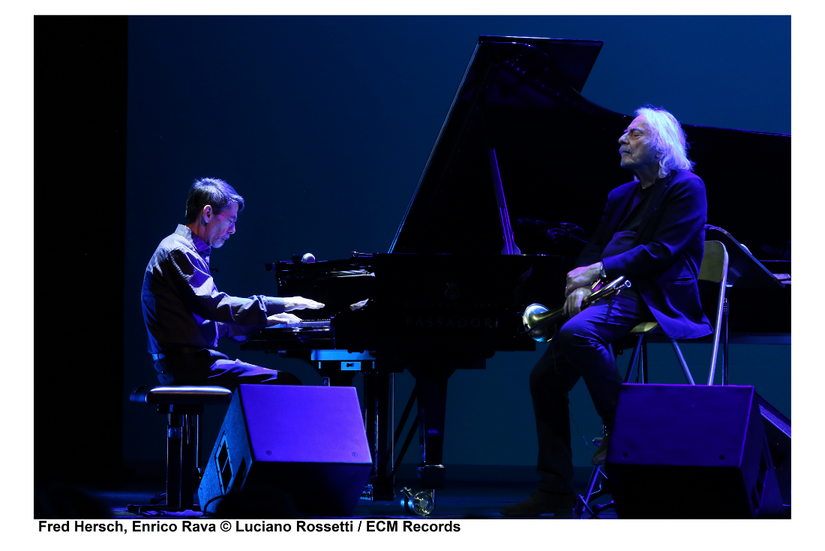 it’s not what you play, it’s how you play it

Pianist Fred Hersch has been one of the most in demand and influential pianists of his generation. He has a vast discography both as leader and sideman, playing with jazz greats Stan Getz, Charlie Haden and Joe Henderson among others.

With his long standing trio with Drew Gress on bass and drummer Jochen Rueckert, Hersch is renowned for his continuing exploration of the piano trio format culminating in the album Breath By Breath with the trio and the Crosby Street String Quartet.

Hersch is also acclaimed for his solo performances, and has the honour of being the first pianist to play a week long solo residency at New York’s legendary Village Vanguard.

With such a distinguished resumé behind him Hersch is still seeking out new musical environments for his playing, and with the release of his ECM debut, The Song Is You alongside Enrico Rava, the pianist has found another remarkably compatible partner.

It was therefore a pleasure to be able to talk to Fred about playing with Enrico, and working with producer Manfred Eicher.

Your meeting and album with Enrico have very quickly received much critical acclaim. Can you tell us about how you came to play with Enrico and recording The Song Is You?

Our mutual managers in Europe thought it would be a good combination musically, so they actually set up a few gigs in the summer of 2021 before we ever met or played with each other. It was evident from the first that we were very compatible, and everything just proceeded from there. When Manfred Eicher heard about it, he was already interested in a recording without hearing anything at all.

With just a few live dates prior to recording there seems to be a relationship between you that is very intuitive, and yet has an exploratory edge that suggests the music could go in any direction at a moment’s notice. How much preparation time did you have before entering the studio, and did you prepare any written charts?

We didn’t decide on any repertoire until the day before the recording. We started with some tunes from the concerts we had already played and added some open improvisations which both of us enjoy doing very much. As Enrico wisely says, “it’s not what you play, it’s how you play it”. So there’s always room for another version of any tune as long as it’s compelling and emotionally resonant.

Enrico has been a long-time recording artist for ECM, but this is your first album for the label. How did you find the experience and working with Manfred Eicher?

Of course, Manfred is one of the most legendary producers in the history of recorded music. I knew that he and Enrico had a long history, and it was a great way to meet him and get to work with him. It was truly delightful. He was enthusiastic, made suggestions at just the right time, and of course the sound from recording in the beautiful hall in Lugano is absolutely perfect. I am slated to record a solo album for ECM this December, also in Lugano.

You are no stranger to working in a duo situation and have said that this is a setting that you particularly enjoy. Can you tell us what makes the duo so fascinating for you to work in?

I love partnering and being inspired by another great musician in a duo situation. I get to orchestrate, sometimes like a drum set or big band, and sometimes either very orchestrally or as another single note voice like a horn player. And I get to play solo which I really like as well. It takes deep listening and lots of experience on the part of both players for a duo to be successful, and that was certainly the case here!

When listening to The Song Is You there is an overriding feeling that there is more to be said. Do you and Enrico have plans to develop your music further together?

We are continuing to tour when our schedules allow and are aware of adding more things to the repertoire that we are both interested in.

Can you tell us about some of the other projects that you are involved in or working on?

In January 2022 I released Breath By Breath, an album for piano, bass, drums and string quartet that featured a suite of compositions based on my long-time meditation practice. In January 2023 a duo album with vocalist Esperanza Spalding Alive at the Village Vanguard will come out and we have an extensive tour of the US as well as an album release week at the club. I am also composing some music for concert pianist Igor Levit for a premiere in Lucerne in March 2023.

You have also written your biography, Good Things Happen Slowly: A Life In And Out Of Jazz. What made you choose to write the book, and document your life so candidly?

The book came out in 2016. I felt I had a story to tell, and at age 60 then, it seemed to be the right time to do it. The book focuses on my sexual identity, my life in jazz, New York in the late 1970s and early 1980s, and my various health struggles. It seemed to resonate with a lot of people on many levels which was very gratifying.