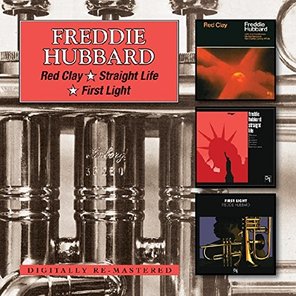 Freddie Hubbard (trumpet or flugelhorn) on all tracks, with:-

In this handsomely packaged twofer from BGO Records we visit a pivotal point in Freddie Hubbard’s distinguished career, not necessarily one that will appeal to those who cherish the recordings he made as a Jazz Messenger or as a powerful entity within the Blue Note & Impulse roster but one that aimed to capitalise on the broader appeal of the pop orientated albums he made for Atlantic that immediately preceded his signing up with Creed Taylor’s C.T.I. label, the first three albums of which are represented here. The story of his transition from fiery hard bopper to boogaloo blues merchant is comprehensively detailed in the informative notes accompanying the discs which include first hand impressions of the recording sessions by some of the musicians and producers involved.

Did this move to embrace popular idioms diminish his talent? I don’t think so. The music, though at times threatened by subservience to insistent rhythmic formulae can be powerful and whilst it occasionally descends into a rather sterile repetitiveness (Joe Henderson being fingered as the guiltiest party in this respect) there is an overall vibrancy that is quite infectious. Herbie Hancock on electric piano plays with such expressive élan as to confound any notion that that the adoption of this instrument was a mere novelty and his presence lifts the music out of the doldrums at several points. Of the three albums featured `Red Clay` is the best ; `Straight Life ` comes close but the tracks are too long and once they’ve made their initial impact they become a bit tedious. Incidentally, when `Red Clay` first appeared on CD as part of the C.T.I. Master Series it included a live jam session version of the title tune featuring Billy Cobham on drums and Stanley Turrentine on sax and George Benson on guitar. It is a mite more exciting than the studio cut and if it is still available this might be preferable alternative.

Returning to the release at hand, amidst the funk driven tracks there a couple of gems that recall Hubbard’s genius as a purveyor of hard bop integrity: of these `The Intrepid Fox` is a masterful piece as is `Fantasy in D ` which turns up on the final `with strings` disc, composed by Cedar Walton and formerly known as `Ugetsu`harking back to a memorable `Jazz Messengers` date. Aside from the swingers and monotone modal groovers there are some sensitive ballads performances most notably a version of Bernstein’s `Lonely Town` which closes Hubbard’s strings album `First Light`, cited as a best seller in jazz terms and of which he was said to be very proud. With orchestral charts arranged by Don Sebesky, who later went on to include a stunning version of `The Intrepid Fox` on his 1984 album ` Full Cycle`, it utilises the considerable talents of flautist Hurbert Laws and though some of Hubbard’s followers dismissed it as a commercial sell out and probably weren’t impressed that it earned him a Grammy it contains formidable playing equal to anything he had performed in less adorned settings.

A recording made in 1970, the same year as `Red Clay`, gives lie to the notion that Hubbard was wholly preoccupied with commercial considerations: ` Sing Me A Song Of Songmy`, a collaboration between the trumpeter and electronic composer Ilhan Mimaroglu is as stark an avant garde statement as anything being made by the most fervent musical iconoclasts of the time and speaks highly of his integrity as an improvising artist whose talent wasn’t constrained by adherence to easy convention.