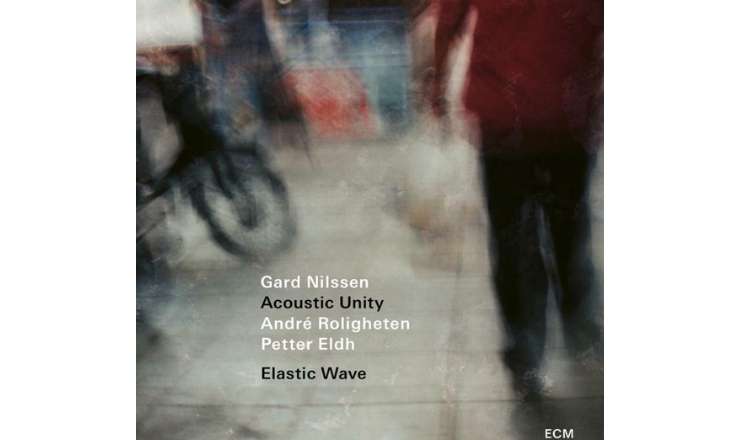 Drummer, Gard Nilssen, has been heard on previous ECM releases with trumpeter Matthis Eick and on the two recordings by Maciej Obara Quartet (Unloved and Three Crowns), and now brings his considerable talents to his own leader debut for the imprint with his Acoustic Unity trio.

If when listening to the album there is an overwhelming sense of togetherness, it should be pointed out that this is in fac the groups fourth album with previous releases on Clean Feed and Odin.

Whie it is the drummer’s name that appears as the leader, this is definitely a group that works as a collective.

Compositions are by all three members and performed in a manner that ranges from the contemplative to out and out full throttle work outs, yet all work within a group sound that sounds well played in and yet remarkably fresh and exciting.

‘Lokket til Jon, og skjerfet til Paul’ by Nilssen shows the tender side of the trio to fine effect.

Poignancy is added to the occasion with a nod to both Jon Christensen and Paul Motian, as for the recording session Nilssen brought one of Christensen’s cymbals with him, integrating it as a second ride cymbal with his existing set up.

In addition, a scarf left at the studio by Paul Motian was also used to dampen the overtones of the bass drum.

What makes this release so attractive is twofold. Firstly, the interaction between the musicians is a joy to behold, and this in turn leads to the diversity of the material that is presented.

The trio are able to write across a broad spectrum, always having something interesting to say, and always as a unified collective.

This diversity manifests itself organically, and never for the sake of mixing things up a little.

Whether contemplative as heard on the deliciously paced and lyrical ‘Cercle 85’ and ‘Altaret’ or whooping it up on ‘The Other Vilage’ with Roligheten playing tenor and soprano simultaneously, the music is inextricably bound up with influences of each member of the group in a homogeneous manner.

It doesn’t hurt the trio’s cause either that André Roligheten is a more than adept multi-instrumentalist, as in addition to his forthright tenor playing on ‘Boogie’ and the Ornette Coleman influenced ‘Acoustic Dance Music’ and ‘Influx Delight’ he can be heard clarinet on ‘Dreignau’ that provides interesting motifs for bassist Eldh and Nilssen to weave contrapuntal lines across and between in a fascinating dialogue.

The big guns are wheeled out with an excursion for bass sax on ‘The Room Next To Her’ with Nilssen’s rolling drum figures, and the intertwining bass lines from Eldh and Rolighten.

The freedom within clearly defined compositions is a constant factor throughout this strong set, and how the three musicians work together is a source of delight in an intriguing and most enjoyable album.