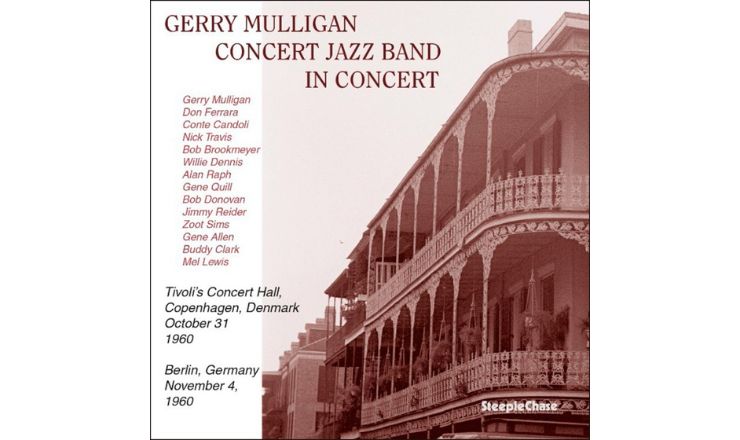 This issue is a great event, an extension to what we know of an important band.

One great memory of Gerry Mulligan. He was playing the Free Trade Hall in Manchester with the quartet.  In the centre of the stage was one microphone: Mulligan looked at it disdainfully, lifted it up and removed it to the side and they played the whole concert acoustically. Internal balance, dynamics, interweaving sound, has always been a concern.

The concerns were transferred to the Concert Jazz Band.  Great writer, superb player, the Gerry Mulligan Concert Jazz Band although short lived was a highpoint for Mulligan.  It showed that Mulligan had absorbed the lessons that he had learnt writing for Thornhill and Krupa.  He also wrote for the Elliot Lawrence Band. Mulligan wrote the many of the arrangement for the Birth of the Cool Band. His own Tentet records for Capitol, contain some fine arrangements. Crucial pieces were written for Stan Kenton before he developed the Quartet initially with Chet Baker and later with Bob Brookmeyer.

The Concert Jazz Band started in 1960 and toured the US. It had a deep, full voiced sound, velvety flexibility, varying forms, from whispers to rounded crescendos, huge subtle variation in dynamics. Mulligan was fortunate in gaining sponsorship from Norman Granz, owner of Verve records, who supported the band during its first year.

Mulligan stated that his aspirations for the band were to achieve ‘the same clarity of sound and interplay of lines that I had in smaller groups.’ Doubling on piano, he brought out the talents of the thirteen-member all-star band with arrangements by himself, Bob Brookmeyer, Bill Holman, Johnny Mandel. The straw boss of the band was Bob Brookmeyer.

Brookmeyer wrote a great deal initially. Strangely, Mulligan wrote little for the band. He claimed that the responsibilities of running the band absorbed too much time. ‘So far as my own participation is concerned, my stamp is on the band and I’m the featured soloist, but up to now I’ve been more of a supervisor of the writing than a very active contributor,’ he stated. ‘But all of what we do is based on the conviction that music is to be enjoyed, by the player as well as the listener.’ Bob Brookmeyer, Al Cohn and Bill Holman all contributed to the band’s book. The three-week European tour starting in November 1960 took the band to cities such as Gothenburg, Berlin, Milan, Basel, Amsterdam, Genoa, Stockholm and finally Paris.

One of the most beautiful arrangements is by Bob Brookmeyer, a version of Django Reinhardt’s ‘Manoir de mes Reves’.  Brookmeyer and the band achieve a languorous soft swing as they move through the piece.  It is almost a precursor of the kind of writing that Brookmeyer would do with the Thad Jones Mel Lewis band just a few years later.

‘I’m Gonna Go Fishin’’ is in two versions: one from Copenhagen and one from Berlin. The original was from the Ellington/Strayhorn music for ‘Anatomy of a Murder’.  Bill Holman wrote the arrangement which features Conte Candoli, Zoot Sims, Brookmeyer and Mulligan and towards the end some superb contrapuntal writing from Holman.

‘Black Nightgown’ and ‘Barbara’s Theme’ are both from Johnny Mandel’s music for the film ‘I Want |To Live’.  Mandel was a great admirer of Mulligan and he expanded the themes from his original film score which was written for a smaller group.

There are numerous examples of Mulligan’s playing throughout the album: Mulligan was one of the greatest baritone players.  Inspired by Serge Chaloff, Mulligan made the baritone sound light and lithe: he might have written little but he played a great deal.  ‘Body and Soul’ shows his well-hidden, reluctant romanticism.

‘Bweebida Bobbida’ was actually written for Kenton but was never commercially recorded.  Mulligan obviously loved the piece.  He kept it when the band was reformed in the 1980s. Here the arrangement is by Brookmeyer.  Based on the changes of ‘I Got Rhythm’, Mulligan’s solo is the dominant one before the acerbic sounds of Gene Quill and Bob Brookmeyer.

‘Apple Core’ by Mulligan is dedicated to Zoot Sims who was brought to Europe to add some swinging firepower. Sims is also featured on Mulligan’s arrangement of ‘Come Rain or Come Shine’.  This is one of the few arrangements that Mulligan did for this band.

In 1959 Mulligan recorded an album with Johnny Hodges where this piece is from. The arrangement of ‘18 Carrots for Rabbit’ is dedicated to the alto player whose nickname was Rabbit.  The two versions do not differ markedly.  Gene Quill is featured even though he had a very different sound from the Ellington player.

The rhythm section of Mel Lewis and Buddy Clark is piano less for most of the time but the recording allows us to hear Mulligan occasionally taking to the piano. The drumming of Mel Lewis has the selfless fluidity and drive that marked all his work and gave the Concert band its relaxed swing.

This issue is a great event, an extension to what we know of an important band. Never issued before, it is good that we have the opening concert of the important tour.  The last concert in Paris was also recorded.