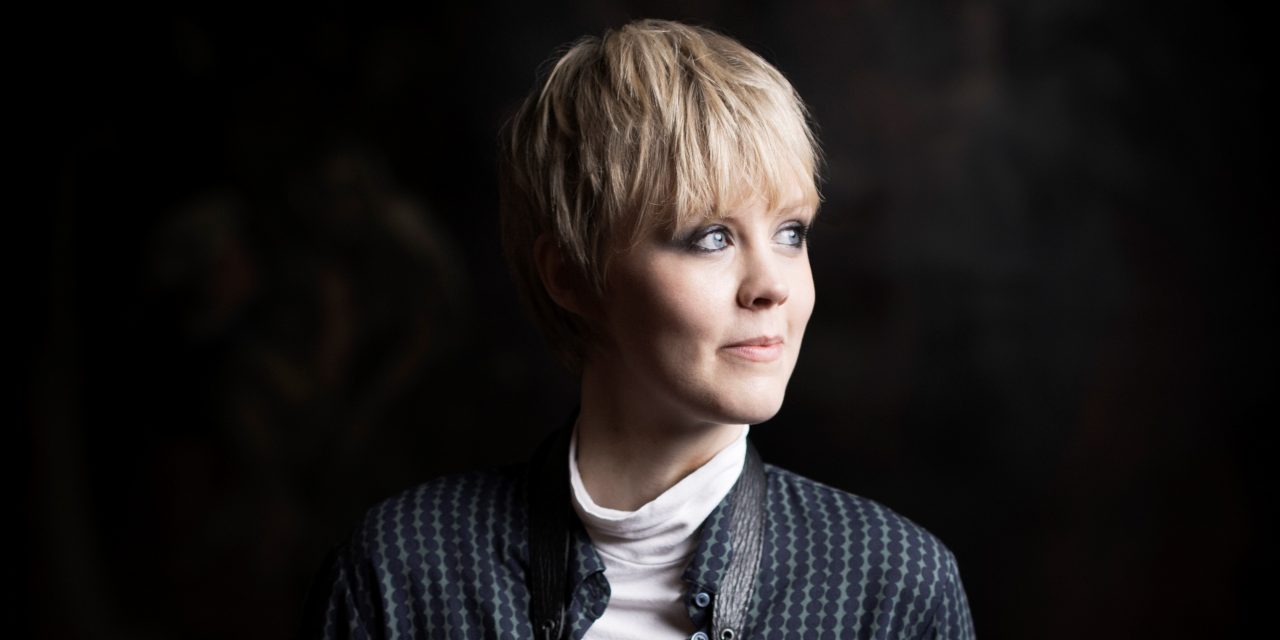 It’s exciting hearing my music develop and the members of the band making it their own.

In a short space of time Helena Kay has established a reputation as a formidable saxophonist and composer. They have studied in New York and London, and during this time were awarded the Young Scottish Jazz Musician of the Year Award in 2015.

They released their debut album Moon Palace to considerable critical acclaim in 2018, ans have now followed this up with a new album for their KIM Trio with the addition of pianist, Pete Johnstone, and a set of new compositions that draw influences from places that have special significance and importance for them.

Helena very kindly took some time out to talk to Nick Lea about their new album and band.

Can you tell us a little bit about your new album, Golden Sands?

Golden Sands is my second album as a bandleader, and my first self-release. The compositions are all by me, and played beautifully by Calum Gourlay, David Ingamells and Peter Johnstone.

The album is quite different from your debut, Moon Palace. What influenced you to bring in another voice to the KIM Trio with the addition of Peter Johnstone on piano?

I didn’t exactly plan it, but the music that I was writing was becoming more harmonically intricate, so I really needed to add a chordal instrument. I’ve worked with Pete in a duo in the past, and we play together in the Scottish National Jazz Orchestra.

He’s so passionate about music and he’s a joyful person to be around. He always pushes me and keeps me on my toes on the bandstand, and he’s an old friend and a lovely person, so he was the perfect musician to add to the trio.

The compositions have a very different feel to them from your writing on the debut album. Has been a conscious decision or something that has developed organically over time?

It wasn’t really a conscious decision. My charts are basically lead sheets, I write a horn line and a bass line and give Dave Ingamells on drums either of those and Pete gets both.

Because this is a small group and there’s a lot of improvising, my charts aren’t too prescriptive, so the music only really comes alive when the musicians in my band put their stamp on it.

It’s exciting hearing my music develop and the members of the band making it their own.

After the critically acclaimed Moon Palace in 2018, it has been four years before you have recorded again. Was this something that was planned to have a long gap between albums, or dictated more by circumstances?

More by circumstances; originally, I had wanted to record in the summer of 2020 in New York with my NYC KIM Trio, but that didn’t go to plan.

My life changed quite drastically that year, I moved back to Perth for lockdown to ‘wait it out’, with the intention of going back to NYC as soon as I could, but when it became clear that covid would be around for a while I decided to move back to London.

After that, I did various funding applications for a recording, with no luck, then became a CMF Artist in 2021, and they helped me set up a crowdfunder.  I wrote most of the music for this album pre-covid, with the exception of ‘Towards The Sun’, which is a lockdown composition.

I’m really glad that this album happened when it did, where it did, and with the musicians I recorded with. Perhaps I wouldn’t have been ready for it in 2020.

The compositions on Golden Sands draw their inspiration from places that are important to you. Can you elaborate on this?

I think we’re all very much influenced by our surroundings, places and people, and having lived in different places in the world, I’ve changed a lot.

I wrote most of the music for Golden Sands while I was living in New York, which was a hugely influential and inspiring time. I was hearing so much amazing music and meeting incredible people and having lessons with some of my heroes! (Melissa Aldana, Dayna Stephens, Chris Cheek).

How did you become interested in jazz, and when did you start playing the saxophone?

I started playing the saxophone when I was 11. I was already learning piano and violin; my dad plays piano, and string lessons were offered at my primary school. I begged my parents to learn the saxophone and they finally gave in.

My first teacher in Perth, Jim Morrice, was a lovely and very encouraging teacher, and he got me improvising and listening to some records (though at the time as an 11-12 year old I didn’t really ‘get it’ until a bit later). I heard about Fife Youth Jazz Orchestra and joined when I was about 14.

Richard Michael started FYJO forty years ago and still runs it with just as much (if not more) enthusiasm today. It’s totally infectious and he’s one of the big catalysts for my love of this music. Perth and Kinross have a really strong music service and I was lucky to have a great teacher at my school – Philip Alexander.

I was also a member of NYJOS and TSYJO, and learned a lot from Andrew Bain and Malcolm Edmonstone, who encouraged me to go to Guildhall, and Tommy Smith.

You have in the past played alto saxophone. Do you still play alto, or is the tenor now your sole instrument?

I started on alto saxophone; I still play it sometimes (with SNJO and Issie Barratt’s Interchange Dectet) but tenor is definitely my main instrument.

I switched to tenor halfway through my undergrad at Guildhall, I bought a cheap Conn in Edinburgh just to have in case I needed it for gigs, but then got really into Sonny Rollins and never looked back!

Who would you say has influenced you as both a saxophonist and composer?

My favourite players of the greats are Sonny Rollins, Lester Young, Charlie Parker, John Coltrane, Stan Getz, and many more. I also love Geri Allen, Thelonious Monk, Antonio Carlos Jobim, Billie Holiday. There are too many to mention really.

Can you tell us about some of the other projects you may be involved in?

And what are your plans for the band now the album has been released?

We’ve got an album launch tour coming up in November:

9th – The Flute and Tankard, Cardiff

And another tour in Scotland next year. More info and tickets available on my website www.helenakay.com

I’m writing some more music for this band, and I hope to keep gigging and recording as much as I can.