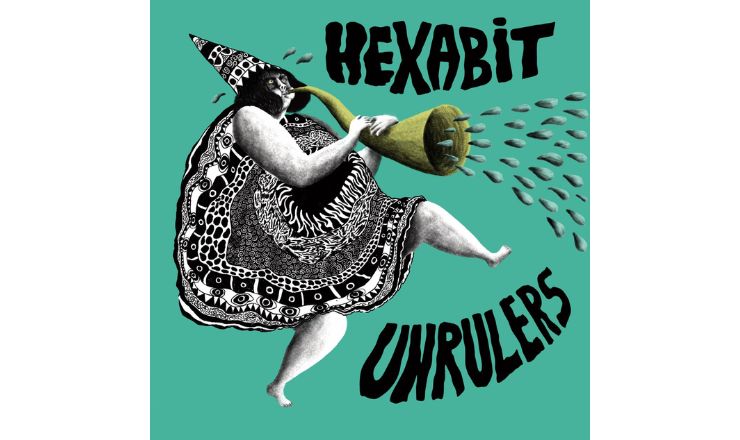 Hexabit’s press release for UNRULERS makes a big deal of how “wild, playful, and unusual their music is. The first couple of times I listened I had a hard time figuring out what instruments were being played. I was wrong about a piano. Stina Hellberg Agback is a harp player who says she wants to use her classical instrument for improvised music.

I knew there was a guitar, but I didn’t know it was a lap steel guitar. Simon Savard gets some pretty interesting sounds out of it. They range from eerie, psychedelic, to just pretty.

‘Troy’ is the first cut on UNRULERS. If you can imagine a western swing steel guitar player trying to sound oriental with two drummers, a wannabe Albert Ayler sax player, an out of tune piano (that’s what I thought it was), a really cool walking bass line; well, say hello to Hexabit!

Things mellow out a bit after ‘Troy.” I think Hexabit just wanted to get your attention.

There’s a lot of drum on this album. ‘Time Is Up’ lets Simon Savard shine on steel guitar. Tove Brandt’s bass playing is in your face and that’s where it should be. Orjan Hulten does a really nice straight ahead jazz solo.

There’s almost a childlike innocence to parts of this. If you hand an instrument to a young kid, they’re going to want to make noise on it, but they’ll do it carefully… tentatively. ‘Mock Duck’ sounds like kids on sax, guitar, harp, bass, and drums having a good time on the monkey bars.

‘Moon Trip’ starts out sounding like an opening theme for a sixties science fiction western tv show. Orjan Hulten’s sax takes off into the outer limits and Tove Brandt’s bass takes off after him. Stina Hellberg Agback’s harp lassos everyone back to earth.

I’ve never heard anyone play a harp like Stina Hellberg Agback. You should listen to her version of ‘My Favorite Things’ on YouTube.

‘Martin’ has a nice jazz groove going. Hexabit aren’t as weird as they would like you to think they are. Get used to their different instrumentation and they’re a tightly knit group that know how to put out good music.

I’m hoping Hexabit aren’t a one-off recording. I would love to hear more from this very entertaining sextet.