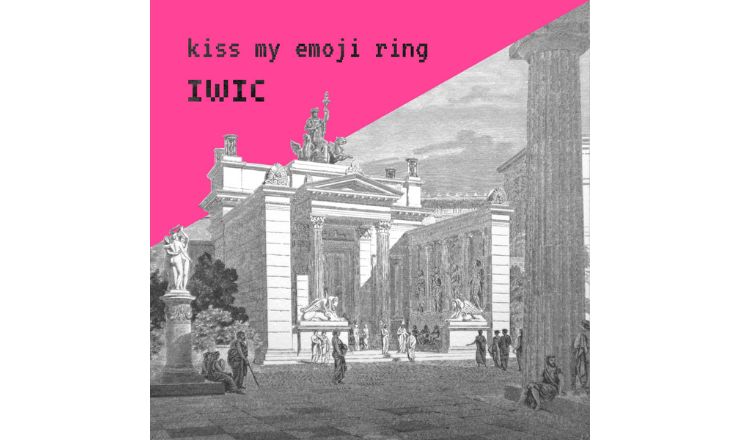 Tier.debut TDR002 (available as a cassette)

Recorded variously, between Athens and London, during 2020/21

During the Covid pandemic, far-flung musical alliances became almost routine, whether or not the musicians were ‘composers’ or ‘improvisors’.  The guitarist/producer Marius Mathiszik, in Athens, and London-based drummer, Dave de Rose, were occupied with the ‘I Work in Communications’ scheme through 2020 while developing another venture.  ‘Kiss My Emoji Ring’ is their second album.  The duo has grown, adding saxophonist George Crowley to the mix.

The music ‘is constructed’ on a base of guitar-improv pieces from Mathiszik.  These are sent to De Rose who constructs a rhythmic scaffolding within them, then passes them in turn to Crowley who lays down his melodic saxophone phrasing to round off each piece, before returning to Mathiszik who would add bass and electronica and synth layers, rendered from Crowley’s projected harmonies.  Though the resulting sounds are consistent, I found them repetitive, which left me somewhat flat.

So rather than thinking of this as excellent, modern music, which I don’t think it is, I looked for different qualities and one such factor is that it is highly experimental.  It has sought a method of bringing musicians together at a time when it was impossible for them to be together literally and to play together and in this they succeeded absolutely.  It was an experiment into the potentials and limitations of musicians collaborating with each other, though separated in both space and time.  Other groups have achieved this end also, as I have seen with various groups reviewed recently.  It is essentially a system of using improvisation as a process of composition, highly irregular for sure!  This is the group’s second album in experimental electronic music.  Though I don’t see this music working too well, I find that the process certainly does.

An aside to this was my being drawn, presently, to reflect on other electronica and experimental music which I have enjoyed.  These were often badged with mnemonics such as Ambient, Avant-Garde, Electronica, Experimental, Free Jazz and No Wave and referred to many genres via the names of their artists, such as Ornette Coleman (d. June 11, 2015) Tangerine Dream, Brian Eno, Kraftwerk, Pharoah Sanders (d. Sept 24, 2022) and many others from many different eras.  Each in their own way has been an experimenter and their trials have succeeded, as indeed have those of the trio, ‘I Work In…’.

A final ‘note’ if I may.  Why the cassette tape format?  One needs to be sure that tapes are stored in a cool, dry and dust-free environment that also excludes any form of moisture.  Tape must be protected from fluorescent light and direct sunlight.  It must also be stored away from combustible materials and not subjected to speedy temperature fluctuations.  It can be spontaneously combustible!  It needs to be protected from mould.  It also has absolutely no aural advantage over digital or vinyl, so its use must be put down to – FAD!