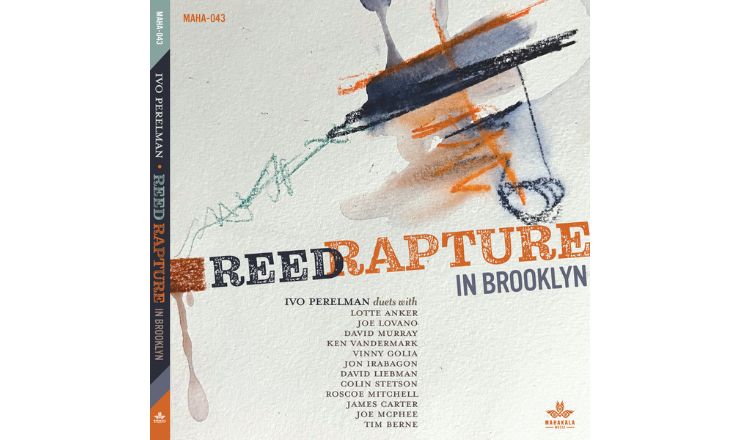 The music cascades effortlessly between these brilliantly counterpoised virtuosi…

Ivo Perelman has recorded some 100 or more works and most of them are utterly improvised.  He has been compared to Ayler and Coltrane, but he is more singular than that.

He is meeting many of these reed players for the first time and the resulting, improvised duets generate a vast gamut of sounds, evidence of the development of Ivo’s musical intellect.

This is not his first such work: in 2021 he released Brass and Ivory Tales (Fundacja Słuchaj, 2021) a nine-volume boxed set of Ivo in duo with nine pianists.  ‘Reed Rapture’ is a twelve-volume boxed set and Ivo is planning another such venture recording duets with guitarists.

Among the musicians listed, only Lotte Anker is female, while her music along with that of Golia, Irabagon, Liebman and Stetson is essentially unknown to me. The other seven all have a place amid my favourite improvisors, musicians and saxophonists.

This, I think, merely serves to suggest that their music has something in common – a shared aesthetic which I may share with them? That does not exclude Anker and Co., probably just that I have never, knowingly, encountered them.

It’s also worth saying that other writers’ comparing Perelman to such greats as Albert Ayler, Gato Barbieri and John Coltrane, whilst meant to be flattering, do not do justice to either his creative vision or his brilliance.  Such comparisons are also unflattering to the vision and creativity of those to whom his work is compared.

I do not intend to analyse each of the volumes or tracks of the collection – that’s for you to do, if you wish.  I have identified, though, what I think of as a common aesthetic in the music of the Lotte Anker/Ivo Perelman duo and the Ken Vandermark/Ivo Perelman duo.  Anker/Perelman are free improvisors who share an inventive, narrative technique.

That allows them to freely interlace their chronicles and even conjoin the varied arrays of tonality from soprano, alto and tenor to deliver either abstract or lyrical solutions to their inventions.

Vandermark/Perelman is different in that they do not seem to be telling a story so much as having a debate, a crucial homily which is unfolded in the manner of the narrative, though more urgently and vociferously, even discordantly.

Nonetheless, there is a story to be revealed and the lithe, articulate dialogue proceeds in spite of what appear to be broken links between the narrators.

The essential, aesthetic similarity between the two duos may be that both seem to readily bring their inventions to gel as intellectual or lyrical ballad forms, regardless of which form is their starting point.

Easy enough to hear them as opposites, but I think of them as merely widely spaced.

One might be tempted to argue that similar empathies could be found between other duos in the programme, but is that so surprising?

Here we have thirteen highly skilled musicians who will be faced with all sorts of selections in their improvising, as there are no directions or guidelines to follow and both individuals in any of these duos may do as they like: the ensuing strain is palpable and profound and each player must move to release the tension. That may lead them anywhere.

Reed Rapture in Brooklyn is a register of opulent interactions which explore the potential developments of such alliances.

The music cascades effortlessly between these brilliantly counterpoised virtuosi and while it is complex quite to listen to, it is totally spell-binding and gratifying throughout this undeniably incomparable project.