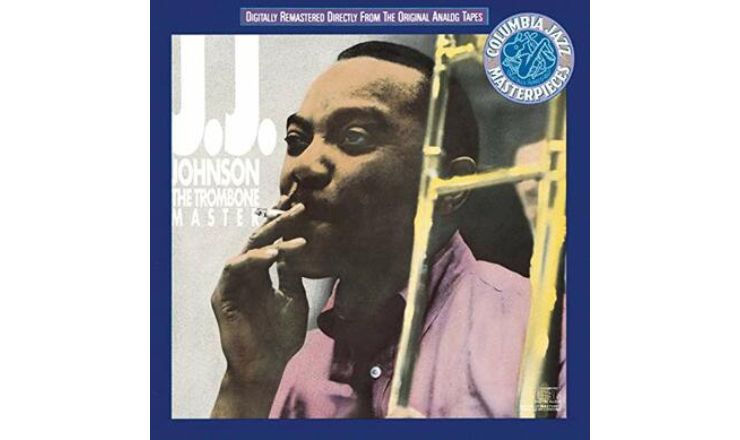 This is a very fine digitally remastered compilation album covering six separate recording dates at the famous Columbia Recording Studios on 30th Street New York, lifted from recordings of the time and re- released as a package some four decades later.

J.J. himself is not a musician who has been as widely appreciated as perhaps he should have been due only to the relatively low profile of his chosen instrument. In truth he was the only trombonist of the be-bop era to fully embrace the genre and be able to stand alongside the likes of Dizzy, Bird and Monk. His tone was always clean, somewhat dry at times and the slide work so smooth as to become indistinguishable from that of the valved version. In his early years he played in the big bands of Benny Carter and Count Basie before West Coasting in a three man trombone section alongside Mike Zerwin and Kai Winding on the Miles Davis classic “Birth of The Cool” album of 49. In fact it was with Winding that he enjoyed the most successful period of his career in the sixties with their two trombone front line and rhythm section for seven releases including the famous ” Great Kai and J.J.” in 61. Despite his many achievements both as a front line player and a composer of note, he did at one time take a job with The Sperry Gyroscope Company just to make ends meet. Although he recorded on around one hundred albums, including forty two as leader, during his active years of 1949 to 1997 he began to lose his prominence as a musician in the eighties. J. J. Johnson survived prostate cancer during his latter years but sadly took his own life on 4th February 2001 aged 77.

Three tracks from side 1 of the album were recorded during the February 19th 58 sessions and are originally from the”J.J. In Person” disc. Although these are all studio recordings, on most releases the two ballad features include overdubbed applause, plus on some versions “fake” announcements. The disc kicks off with Monk’s famous “Misterioso”, the most versatile Tommy Flanagan introducing the theme and sounding as much like the composer as is humanly possible. Nat Adderley is without doubt the star here with a superb extended high note solo, before the leaders low tempo approach precedes the ensemble finale. The two ballads, Milt Raskin’s “Laura” plus “My Old Flame”, originally from the Mae West film “Belle Of The Nineties” in 1934, are both showcases for J.J.’s sweet and effortless trombone sound both in the thematic statements and melodic improvisations. The side is completed with a nine minute version from 57 of the signature piece “Blue Trombone” from the album of the same name. This classic cut benefits from the presence of Paul Chambers and Max Roach who alongside Tommy Flanagan provide the perfect backdrop for a total “tour de force” from the leader who stretches his instruments capabilities to their very limits.

Side 2 is full of great standards starting off with Cole Porter’s “What Is This Thing Called Love” which finds J.J. in fine up-tempo mode after a strong opening theme statement from Tommy Flanagan at the February 58 session. The Bob Haggart – Johnny Burke song “What’s New” has been a staple for many jazz musicians down the years since it’s inception in 38. Here it’s succulent theme is given a full and unique treatment by the trombone master who has the uncanny skill of bringing new life to almost any piece. There was a change of rhythm section for the 1960 session at Columbia when our own Victor Feldman takes over the keyboard duties alongside Sam Jones on bass and drummer Louis Hayes. Originally from the J.J. album “A Touch Of Satin” the band approach Duke Ellington and Billy Strayhorn’s jaunty” Satin Doll”, which was composed in 1953, but somehow seems older, in upbeat fashion with the drummer making his presence felt while the strength of the trombone solo making this an album highlight. Julie London made Arthur Hamilton’s sultry ballad “Cry Me A River” her very own with her 1955 heart felt rendering and here from the “Blue Trombone” session there is once again a sense of re-invention with the leader and pianist Tommy Flanagan to the fore. The album concludes with a brief excursion into “Goodbye” a tearful ballad from the pen of Gordon Jenkins, the mood is somber and respectful with Victor Feldman switching to vibes and the leader at his most melodic.

In summary this album is a joy from start to finish plus an excellent example of a master musician, setting the very highest standards on his instrument for all who followed him.