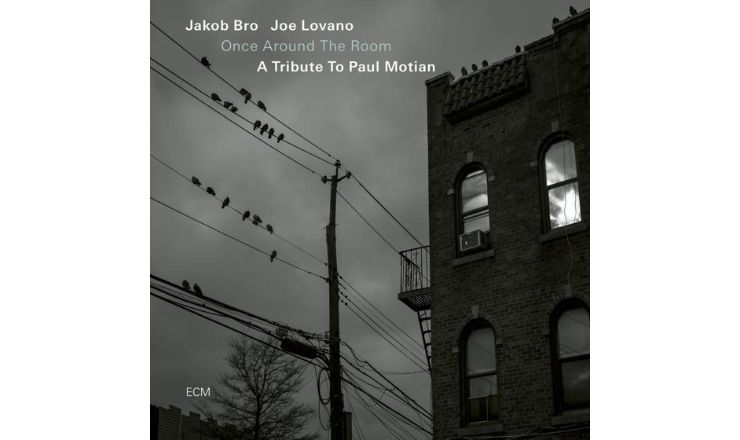 A wonderful homage to Paul Motian this release from Jakob Bro and Joe Lovano scores full marks on every level.

A wonderful homage to Paul Motian this release from Jakob Bro and Joe Lovano scores full marks on every level. Both men had long and musically productive associations with the late drummer and this empathy and understanding has been brought to this well thought out and varied set.

The music recorded by the septet is remarkably light on its feet. Quite an achievement in a band comprising of three bass players and two drummers. How everyone contributes their all and manages to avoid the group sounding cumbersome and cluttered is testament to the quality of the arrangements and musicianship on display.

It is this sense of space and unhurried nature of the music that makes this release so eventful. The tension and release of each composition is perfectly judged. Compositional credits are shared equally between the leaders, two a piece by Bro and Lovano, one by Paul Motian and a group improvisation, ‘Sound Creation’.

Lovano kicks things off with ‘As It Should Be’ that makes superb use of texture with Bro’s guitar switching from sharing melodic duties and providing a warm backdrop for the tenor saxophone. Bro’s solo follows a similar path using subtle, yet lyrical single note lines surrounded by an electronic backwash. Lovano solos using the entire range of the tenor from piercing altissimo to low register forays.

‘For The Love Of Paul’ contains echoes of Motian’s idiosyncratic writing and Lovano plays some meaty tenor over the rolling drums of Jorge Rossy and Joey Baron. The composition is also notable for the contribution of the bassists who offer impeccable support for Bro and Lovano before and outstanding bass dialogue.

The guitarist’s compositions focus on the gentler side of the music with a couple of lovely ballads. ‘Song For An Old Friend’ has a passionate and lyrical outing from Lovano, with his upper register playing perfectly weighted and expressive. The guitarist steps out front and takes centre stage on ‘Pause’, his gentle lines supported by the three bass players.  The playing from all on this track is quietly profound without being over sentimental. A feeling echoed by Lovano’s tenor saxophone.

When listening to the album one cannot shake the feeling that this is a drummer’s gig. Jorge Rossy and Joey Baron show restraint and good taste from beginning to end, and to devastating effect on Motian’s ‘Drum Music’. Without a shadow of doubt, Paul would have approved.