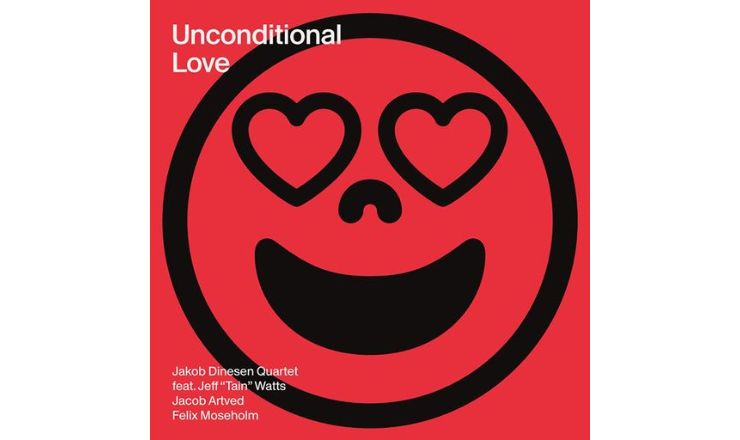 А very good album with strong playing by everyone involved.

Jakob Dinesen is Denmark’s most beloved tenor saxophone player. He’s won two Grammys for best jazz album in 2003 and 2007. He’s won other Danish jazz awards as well. He’s recorded and toured with some of the best musicians from around the world.

Jeff “Tain” Watts was born and raised in Pittsburgh. He won three Grammys while playing with Wynton and Branford Marsalis. He received a Guggenheim Fellowship in 2017.

Jacob Artved on guitar and Felix Moseholm on bass are no slouches either. Jacob Artved was admitted to the Royal Academy of Music as the youngest student ever, but chose to quit, so he could move to New York and jam in the clubs.

Felix Moseholm is from Copenhagen but lives in New York. Felix has worked with the likes of brad Mehldau, Alvin Queen, Jorge Rossy, and Alex Riel.

The first notes you hear on Unconditional Love; a saxophone led album are a drum solo? The album was recorded at the drummer’s home studio in Easton, Pennsylvania so this may have been a tip of the hat to Jeff “Tain” Watts, or, a signal that everyone in this band was on equal footing.

Jakob Dinesen has been compared to Getz and that’s readily apparent on ‘Unconditional Love’ the title track; written by Geri Allen. The instrumentation is similar to Stan Getz’s bossa nova groups with Artved’s cool guitar strumming a hummable groove with Tain’s quiet snares and cymbals setting the rhythm.

Dineson wrote seven of the tunes. ‘Melancholia’ by Ellington has Dinesen playing sad and lonesome. It may be his best outing on the album.

Felix Moseholm’s bass starts off ‘Bahoup’ a Bluenote sounding hardbop romp. Dinesen repeats the theme and then lets Jacob Artved’s guitar and Watt’s drums pick up on and run with it. This is very much a group that works as a collective.

Jakob Dinesen has an immediately identifiable tone. There’s a sameness to it. His tone has a lot of “ache.” I like his sound better with a piano. It compliments that “ache.” Listen to Dino, or Yasmin, or Keys and Strings; three great CDs, all with piano.

Unconditional Love is a very good album with strong playing by everyone involved.