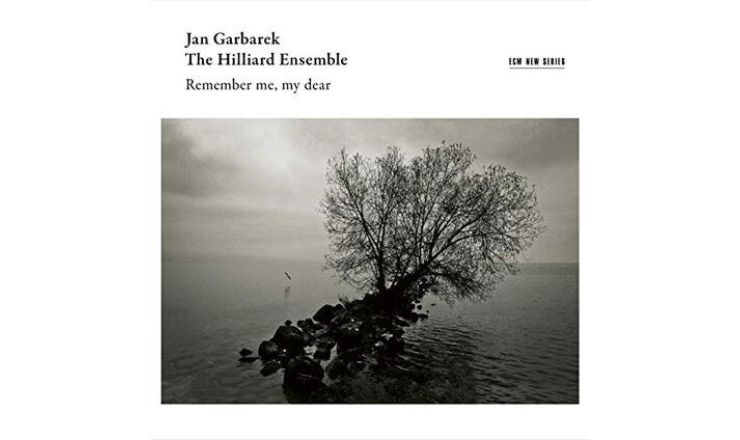 In much the same way as Keith Jarrett’s The Köln Concert, Garbarek’s association with The Hilliard Ensemble has had an enormous effect on the shaping of ECM Records. Like Jarrett’s famous solo album, the inaugural release from the Norwegian saxophonist and the English classical vocal quartet, Officium, quickly racked up sales of a million copies; and bringing ancient and modern music across musical genres in a way that surprised both performers and label boss, Manfred Eicher.

There were the inevitable raised eyebrows from the jazz and classical music fraternity, but over the course of three studio albums and twenty years of touring, this unlikely partnership went from strength to strength broadening their repertoire and becoming bolder in their performances of the material based on this deep mutual trust, and thousands of concerts. Remember Me, My Dear was recorded live in October 2014 at Chiesa della Collegiata dei Santi Pietro e Stefano in Bellinzona, in the Ticino canton of Switzerland, during the Hilliards/Garbarek farewell tour, with the last ever performance given just a couple of months later at King’s College, Cambridge (and reviewed by Jack Kenny), and gives a very different perspective on the work of this unique and groundbreaking ensemble.

From the outset there is a comforting familiarity in the music. The harmonious sound of the Hilliard Ensemble and the sonorous soprano saxophone of Jan Garbarek exploring material from their collective discography, all instantly recognisable and yet retaining an element of surprise in the live recording that captures not just the unique sound of the musicians but also that of the building. If the sound is not as pure and crystalline as the ‘studio’ albums (we should perhaps remember that these were also recorded in a natural acoustic of another sacred building, the St Gerold monastery) there is an air of anticipation as to how the venue itself contributes to the performance, as the sound of Garbarek’s soprano floats and hangs in the air with the natural decay of the space in it occupies. It is this very element that brings another dimension, almost another voice, into the equation and another spirit that is almost as free-ranging as the saxophonist’s commentary.

While the Hlliards had been in existence for some twenty years prior to the association with the saxophonist, we should not underestimate Garbarek’s contribution to the development of the classical vocal quartet. In terms of exploring how music spanning not just decades but centuries could be reworked and re-invented with the use of an improvising voice that was able to blend with the voices and ancient melodies; but also in the way he would influence the repertoire of the Ensemble. From the 1998 set, Mnemosyne, Garbarek and the Hilliards were looking at ways of extending the repertoire, with material that spanned twenty two centuries, and with the 2010 recording Officium Novum, was incorporating material composed by Arvo Pärt’s ‘Most Holy Mother Of God’ along with ‘Allting Finns’ and ‘We Are The Stars’ by the saxophonist. All three of these compositions are heard here and given different readings from the original recordings.

Once again with this album we are presented with the unique music that this unlikely collaboration brought forth. An album that combines not just the ancient with the modern, but also successfully transcended any sense of audience demographic. With more than its far share of criticism from classical and jazz worlds (both of whom should have known better), and appealed to listeners that had perhaps never encountered music like it before hand.

When listening to Remember Me, My Dear there is a timelessness about the music that is truly remarkable, and it is therefore appropriate that this stunning album should take its place within the discography of this unique and wondrous musical collaboration.