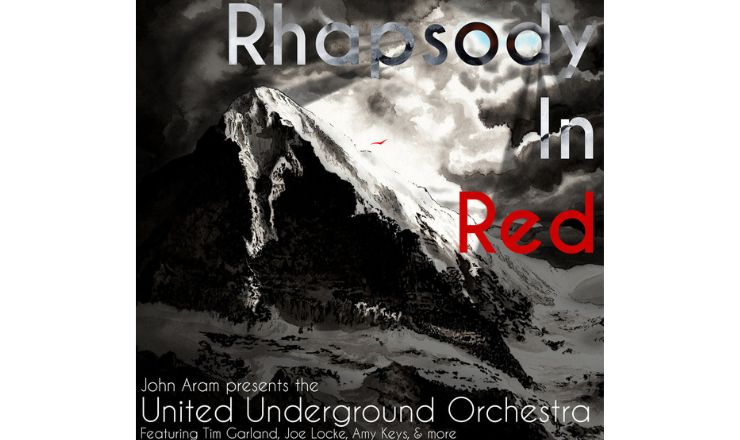 Infectious collection of songs that swings with the best

You might think that big band music is from a by-gone era but although it has its roots in the pre-war years, there are actually a surprising number of contemporary jazz orchestras around the globe.

The British trombonist, John Aram has increased his group from quintet to big band size and along with virtuosic USA vibraphonist, Joe Locke and eminent saxophonist Tim Garland, now leads an all-star ensemble of some of the finest musicians from the United Kingdom and Switzerland.

They are also joined by the vocalist, Amy Keys who Aram met whilst supporting Phil Collins on tour and she brings an enormous amount of experience and talent.

First up is the title track, ‘Rhapsody In Red’ and it swings straight in with a tutti performance, Locke’s vibraphone the obvious lead. Here are obvious references to the great maestro’s original suite.

Track two is the full version of ‘We Got A Future’ and after just a minute’s intro featuring percussion from Hnatek and some funky guitar, Amy Key’s vocal provides warmth and depth to this track, before vibraphone and sax solos join in once more.

Key’s vocals are soulful and end with some wonderful scat.

Muted melodies introduce the third track, ‘Black Elk’, and it continues in a calming resonant way, deep sax notes almost asking meaningful questions, which the rest of the band then answer in lighter more tuneful ways.

The arrangement is first rate and a pleasure to lis-ten to.

‘Ambleside Nights’ picks up the pace once more, setting your feet tapping along and then a real keystone track, ‘This Is Just To Say’, brings a brass intro and Amy Keys behind the microphone once more, her powerful and accomplished vocals combine with the delightful playing of the band and strong lyrics to bring this composition fully to life.

Track six is ‘Little Psalm’ and is four minutes of brilliance, with brass the order of the day to begin and vibraphone and trumpet duetting; a bold solo from the latter also reminds the listener how beautiful a sound one instrument can make.

‘Blues for Little Joe’, was originally recorded by Tim, Joe Locke and Geoff Keezer but is now developed into a full blown workout for the whole 12 piece ensemble.

Strident tutti sections are the order of the day to start and then melodic guitar chords lead to an alto saxophone enjoying it’s time in the limelight, supported by skilful percussion and then Locke’s vibraphone driving the song forward towards more tutti – it’s impossible to keep still whilst this is playing!

Included in this offering is a radio edit of ‘We Got A Future’.

Also, there is a second bonus, ‘Sancho’, which was written by Kenny Wheeler, who John tells me has had a profound influence on many of the musicians in this group.

It just rounds out this record perfectly, bringing everyone together almost as a farewell, not that you want to say goodbye to this infectious collection of songs that swings with the best.