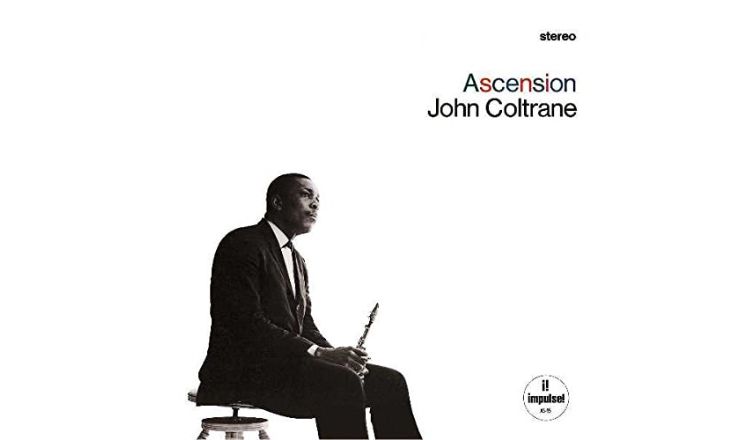 “You could use this record to heat up your apartment on a cold morning” – saxophonist, Marion Brown

Ascension is one of the most significant recordings in the canon of what people might call ‘free-jazz’. Personally, I prefer the term improvised music, and what you get on Ascension is a huge burst of improvised music, both individually and collectively. The piece opens with a direct, if lop-sided, quote from ‘Acknowledgement’, which was part of A Love Supreme, recorded a year earlier. Even on this quote, there is a tension in the ways in which the players respond to the theme, and the ensemble then proceeds to play much like an orchestra tuning up before hitting a sustained wail of instruments. The make-up of the ensemble, with its five saxophones, two trumpets, and four piece rhythm section calls to mind other experimental ensembles of Coleman and Ayler, say, of around the same time. However, the sound that Coltrane gets from his players is quite different from his contemporaries, not least because of the approach to music that he is taking.

Much has been written about the ways in which spirituality helped Coltrane kick his drug habit, and about the ways in which he was working with his wife, Alice, towards a sense of enlightenment. On Ascension, you see the path that he is following, and the ways that this has brought him a long way from the tranquillity of A Love Supreme into somewhere much more challenging. You could look to the opening of Dante’s Inferno for a clue as to what is happening here – ‘Midway life’s journey I was made aware / That I had strayed into a dark forest, / And the right path appeared not anywhere, / Ah, tongue cannot describe how it oppressed, / This wood, so harsh, so dismal, and wild that fear / At thought of it strikes now into my breast.’ Here was Coltrane (some two years from his death in 1967) pushing way beyond the critically acclaimed and much loved ‘A Love Supreme’ (surely one of the pinnacles of jazz) into somewhere ‘harsh, dismal’ and fearful. The raucous clamouring of the ensemble could be interpreted as the anguished cries of souls in Hell, or as the rushing wings of approaching angels, or as the angry cries of people on earth witnessing the way the world stood in 1965. Certainly, this is a piece that is of its time (and listening to it with a clear appreciation of the ways in which America, and the world, were reacting to Vietnam, and to the rise of the Black Power movement in the US) helps listeners to get their head into the space of righteous indignation that could have motivated some of the playing here. But Coltrane was also moving his understanding of music as a collective response to spiritual themes, and so it would be a mistake to only listen to this as a piece from a given time because the intention is for it to be timeless. To be frank, listening to it now over 50 years after its release, is still a rush and is still a challenge. This is not music to have tinkling in the background, but a confrontation. You need to set aside 40 minutes to listen to what unfolds. Even if you approach the music with some prejudice against improvised music, it begins by shaking any preconceptions from you and pinning you back so that you are ready to follow the logic and coherence of the piece as it unfolds. After a total immersion in the piece, you emerge, perhaps cleansed, perhaps relaxed, but definitely changed to the way you were before the piece began.
Picture
Naturally, the idea of ‘free’ music having logic or coherence will strike some readers as peculiar. I well remember my father listening for a few minutes to Coleman’s ‘Free Jazz’ album I was playing and turning to leave the room, muttering ‘Sounds like their just making it up’. Oddly, very little improvised music is so simple – you just have to listen to a bunch of primary school children exploring musical instruments to know what ‘making it up’ sounds like. On the other hand, what is needed to improvise is a mastery of one’s instrument (and just look at the line up of players in this recording), some sense of structure, and a commitment to the whole enterprise. In terms of structures, Archie Shepp has said that ‘the ensemble passages were based on chords, but these chords were optional. What Trane did was to relate or juxtapose tonally centred ideas and atonal elements, along with melodic and non-melodic elements.’ A good way of appreciating what this means is, about 29 minutes in (on version 1), McCoy Tyner begins to hammer some major chords on top of the ensemble and gradually wins the floor – the other players back off and he plays one of the most astonishing solos of his illustrious career. Simply comparing his playing here with the solos on A Love Supreme gives you a sense of someone who has experienced an epiphany in terms of what music can achieve and how he can better make use of his instrument. Interestingly, his solo on version 2, is much closer to the playing on ‘A Love Supreme’ and sounds much more like Tyner, whereas he is channelling that hammered keyboard approach of Cecil Taylor on version 1. Immediately, following this, Davis and Garrison work a beautiful arco bass duet, with Jones rim-shotting and cannonballing behind them before launching a solo from which the ensemble burst back in.

Famously, Ascension was recorded twice. Each take lasted for around 40 minutes and there is a well known (and I think unresolved) story about whether take 1 or take 2 was first released – and whether this was then replaced by take 2 or take 1. Both takes begin with the theme from ‘Acknowledgement’, which sets the rhythmic, chordal and philosophical centre of the piece, but the two pieces subtly differ in the ways in which they explore this. To some extent, the difference lies in the ways in which Tyner draws attention, early on in take 2, to the modal structure, and in part to the ways in which soloists take on the overall theme. Broadly, the order of soloing is the same on the two versions (the only difference is the point at which Brown takes his solo), with Coltrane setting things going and then a rolling interplay between solos and bursts of ensemble playing. Each soloist is working within the rhythmic and modal constraints of the theme, but each is looking for ways to push these limits. Not only are the limits of the structure at risk, but each player is also looking for ways to stretch the sound of his instrument, with false fingering, overtones, and extreme registers being the modus operandi. It would be possible for the playing to descend into some sort of blowing contest, with each sax or trumpet player looking to outdo his colleagues. It is interesting how little one gets the sense of animosity or competition here, and how much the solos of each player are simply a competition with himself and a contribution to the collective mood of the piece. Each solo leads into the ensemble playing and lays the trail for the next soloist to follow.

As he continued to do in his latter career, Coltrane takes a philosophical and spiritual position, and then finds ways to bring this to life through action. In the case of Ascension, this means encouraging a collection of musicians to share his belief and his approach to playing. What is so miraculous about this piece is the way in which everyone becomes so passionately committed to the idea and the way of playing. I think that there is a strong case to be made that Ascension is Coltrane’s best, most coherent and clearest statement of what he felt music should be for and what it could achieve.