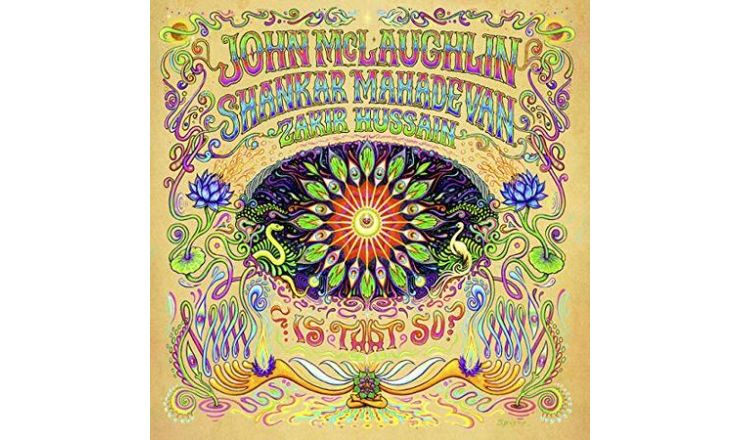 John McLaughlin has had a long spiritual, emotional and artistic connection with Indian music, stretching back to the 1960s. In this release – a collaborative project with singer Shankar Mahadevan and percussionist Zakir Hussain – he takes this connection to a new level. So much so, that McLaughlin’s liner notes include this startling passage: “Dear Cherished Listener…Everything about this recording is new. Shankar and I understand very well that your expectations may not be met as you wish, but we fervently hope that you the listener can listen with an open mind and heart and simply feel the profound depths of emotion from which this music springs.”

In other words, this album sounds like no other McLaughlin album. Forget about his ground-breaking Indo-Jazz combo Shakti from the 1970s, or its 1997 reincarnation Remember Shakti (which included Mahadevan and Hussain in its line-up). Likewise, this is nothing like his collaborations with percussionist Trilok Gurtu in the 1990s on albums such as Live at the Royal Festival Hall and Qué Alegría. Nor is it like the music produced by his latest band, 4th Dimension, which includes Indian musical director and drummer Ranjit Barot.

In a 2015 interview with Ayesha Venkatara, McLaughlin stated, “I think that Indian music has had a greater impact on me than any other influence.” Two years later, he told David West, “Musically, there is common ground between jazz and Indian music. I think they’re the only two cultural expressions that have common ground and that is rhythm and improvisation.” McLaughlin studied with Ravi Shankar and suggested that Miles Davis include Indian musician Khalil Balakrishna (electric sitar) in his band. Balakrishna toured with Miles in 1972/3, and appeared on tracks such as “Great Expectations” and “Black Satin.” Even when McLaughlin was exploring jazz-fusion, Indian music was never far away; witness the inclusion of the haunting ‘When Blue Turns Gold’ at the end of the 1984 album Mahavishnu, which includes flute and tabla.

In all these cases, McLaughlin fused western harmony with Indian music, while adhering to the rules of Indian music. In this recording, he has thrown out the rule book, as he explains in the album liner notes: “From the early 1970s, I’d constantly researched the possibilities of integrating harmony into the traditions of North and South India, while at the same time, keeping as close as possible to the melodic rules of the Raga system [patterns of notes]. However, the idea…was to abandon the rules of the Raga system, and apply my own western harmony to Shankar’s voice.”

And there’s more. This album is dominated by Mahadevan’s voice, with McLaughlin and Hussain mainly providing supporting rhythms and textures, although there are solos and instrumental duets on the album. During the In A Silent Way sessions in 1969, Miles Davis told a young, nervous John McLaughlin to, “Play like you don’t know how to play guitar.” In 2020, McLaughlin has decided to play guitar like it doesn’t sound like a guitar. McLaughlin used guitar synthesiser technology extensively in the 1980s and 1990s to create new colours, textures and sounds (the Live at the Royal Festival Hall album is a good example), but there would always be clearly audible guitar riffs, rhythms and solos within the music.

But now, McLaughlin has used MiGiC, a MIDI conversion software package that enables a guitar to sound like another instrument. On this album, the guitar sounds more like a flute or a keyboard synthesiser, often producing sweeping, swirling soundscapes, colours and textures. If you’re looking for a McLaughlin album that showcases his (conventional) guitar virtuosity, look elsewhere, but if you’re looking for a new experience in sound, then stick around.

At this point, I should mention the excellent album packaging. The CD comes in a gatefold sleeve, accompanied by a colourful 16-page booklet that includes liner notes by McLaughlin and Mahadevan, who describe how the project came together and its impact on them. The album took six years to make, with the two men exchanging audio files across continents, experimenting, refining and finally recording the music. The booklet also contains the lyrics in both Hindi and English and I would strongly recommend reading the lyrics as you listen to the music. That way, you really get to appreciate the amazing virtuosity of Mahadevan’s voice, and his stunning ability to hold, twist or elongate a note.

The album consists of six songs, five of them are based on an Indian Bhjan (spiritual song), and the longest track, ‘The Search’, is an improvised number. The album playing time is 52 minutes. The opening number ‘Kabir’ highlights the sheer beauty of Mahadevan’s voice and you are left in no doubt that this music is being sung from the heart. McLaughlin creates various tones and colours, while Hussain’s tabla provides the rhythmic underpinning.

The near 11-minute-long ‘The Search’ starts with improvised vocals, accompanied by a slow, swirling sweeping synthesiser sound. At points, reverb is added to Mahadevan’s vocals, adding to the emotion of the sound. Four minutes in, the tabla starts up before the start of a long duet between McLaughlin and Hussain that includes tabla beats, a drone-like sound and a flute effect. There are more swirling synths and then Mahadevan re-enters with anguished cries that pierce the soul. At one point, McLaughlin plays what sounds like plucked violins and cellos. It is a vocal performance that has to be heard to be believed.

The closing number, ‘The Beloved’ starts with voice and tabla and features another highly emotional performance from Mahadevan, with lyrics expressing his intense feelings for a goddess. I suspect this will turn out to be something of a Marmite album, with some fans of McLaughlin’s conventional jazz-fusion or Indo-Jazz explorations disliking it intensely. But others – including this listener – will simply love the sheer beauty and spirituality of the music.