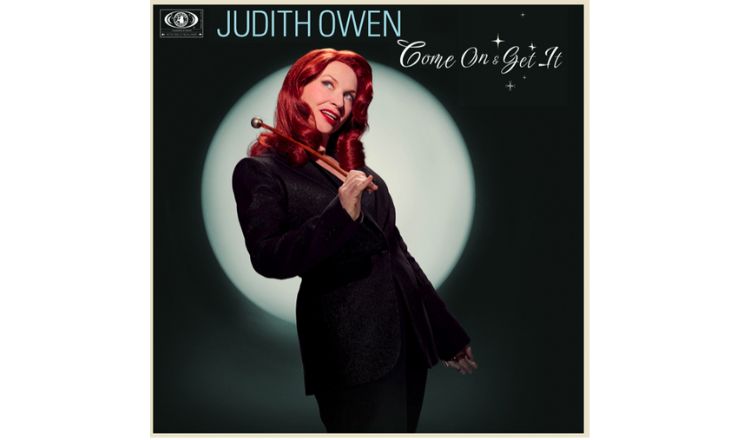 To not listen to it would be a travesty!

Judith Owen’s 13th album, ‘Come On & Get It’, which was recorded at Esplanade Studios in New Orleans, is released on the 7th October, through her own Twanky Records label.

Owen, originally from Wales, grew up in London and is now firmly routed in America, residing in the spiritual home of jazz, New Orleans.

Her inspiration for this collection of 14 delicious songs comes from the female jazz singers of the forties and fifties who instead of singing polite, romantic, demure songs were actually belting out tracks that talked brazenly about sex and loved what they were doing.

Owen, fascinated by these brave, sassy women, dug into their history and discovered so much unexpected material and then used time during Covid lockdown, as many artists did, to do more research and made the decision that this new found passion could be turned into a wonderful project.

The result is this album – to not listen to it would be a travesty!

Track one, ‘Blossom’s Blues’, which was also released early in 2022 as the first single, starts Judith’s story of role reversal where women were expressing their needs and desires.

The original was recorded by Blossom Dearie and when you hear verse two’s lyrics:

“My nightly occupation, Stealing other womens’ men. I’m an evil evil woman But I want to do a man some good”, you quickly get an idea of what this bodacious album is all about:

wonderful vocals from Owen that echo the forties style so wonderfully, blend harmoniously with brush drums, piano and trumpet performed by her Gentleman Callers, as she calls them collectively.

If you get a chance to see this ensemble live, you will see how immersed they are in this wonderful era and genre, period dress just adding to the theatre.

Then the pace quickens with ‘Tess’s Torch Song’, originally put out by Dinah Shore, and which swings with the best – trombones, sax and trumpets fill your ears before Owen’s sassy vocals transport you back in time again – trumpet solos punctuate the tutti sections for a great experience.

Moving on to ‘He’s A Tramp’ and the pace slows again and there’s a laidback atmosphere redolent of a typical smoky jazz club from back in the day.

Another Lutcher classic, ‘Fine Brown Frame’ fills the eighth slot and this is a song all about a woman’s physical desires, laid bare in song, so naughty but brilliant too.

If that wasn’t enough, Judith then sings ‘Everything I’ve Got Belongs To You’ – vibraphone, drums and bass provide the under bed for the fantastic lyrics so beloved of Blossom Dearie.

By now you’ll get the idea with this slick record and so you won’t be surprised to find ‘Come On & Get It Honey’ slipping in at number 10, featuring some groovy scatting from Owen and some tight brass sections too.

A sleazy saxophone introduces ‘Nice Girls Don’t Stay For Breakfast’ which is such a standout track – perfectly sung, a true representation of what this album is all about.

If you’ve not heard this song before, the last verse will having you grinning from ear to ear if not laughing.

Back to some foot-tapping swing next with ‘Why Don’t You Do Right (Get Me Some Money Too)’ that has superb big band sections and solos that truly take you back to the 1940s before the bluesy ‘Snatch And Grab It’ asks you to “hold it baby and hold it tight”!

The last track is ‘Long John Blues’ and although the title may seem relatively innocuous, Dinah Washington lyrics tells of her dentist and how she needed him to fill her painful cavity!

Double entendres abound through this tribute to those wanton female singers of the forties and fifties, who broke the mould and were proud of what they did.

Judith Owen should also be proud of her achievement in discovering these songs and bringing them together in one full on collection – this deserves to be album of the year by quite a length!