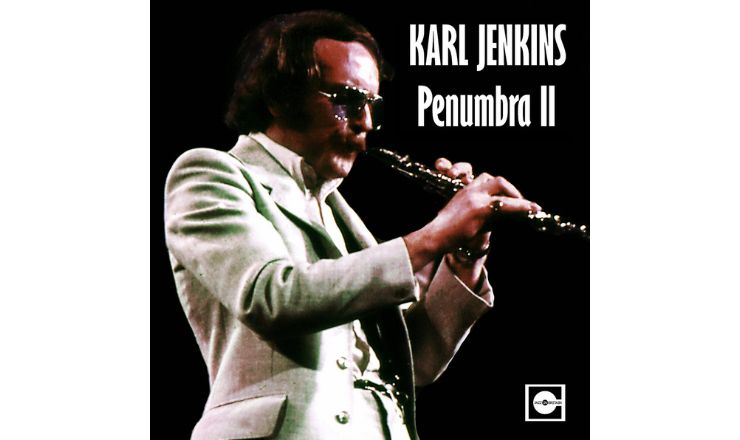 In many senses this was transition music.

Penumbra II is a recently discovered recording by a group of musicians led by Karl Jenkins (now Sir Karl Jenkins). Jenkins started his life as a multi-instrumentalist jazz musician working with Graham Collier and eventually with Ian Carr to start Nucleus. He went on to join the rock band Soft Machine.  Since then, his composing has moved away from rock and jazz and his compositions are popular making him one of the most widely played modern composers.

The booklet accompanying the release is written by Aymeric Leroy and is in the form of an interview with Jenkins as he listens to his long-lost piece.  It was fifty years since the piece had been last heard. Jenkins is pleasantly surprised by the work and even enjoys his own piano playing in the first movement.

A beautiful piano introduction opens the piece with long lines unfurling before the tenor accompanies the piano. The second movement contains the bulk of the music.  In the movement gradually Roy Babbington’s bass figure is introduced.  Chris Spedding starts a characteristic and inventive solo.  Spedding, apparently was unsure how much he wanted to be recognised as a jazz musician.  This solo settles the issue.  Spedding’s playing moves effortlessly into a blues solo reeking with invention. The rhythm with John Marshall and Frank Ricotti comments in the background.

The form of the piece uses crescendos as punctuation with Ian Carr leading the written parts.  One fierce tutti introduces Warleigh on alto and he plays accompanied by a reflective Spedding.  The third harsh crescendo ushers in Brian Smith on soprano with a solo of increasing intricacy.  The movement gradually fades away and Babbington is enabled to rest after his herculean role in holding the piece together. The second movement is the highlight of the album and it is fascinating to listen to early Nucleus, and early Jenkins. Jenkins himself could not remember why Ian Carr did not solo. Nevertheless, Carr leads the combined might of the group.

The third movement is a disappointment. The theme is perky and conventional.  Alan Skidmore finds it difficult to discover a way in to the composition and does little to enhance the music. It is a solo of desperation. His beautiful tone is the main contribution.

In many senses this was transition music.  Jenkins initially was the main composer of the Nucleus book and he was gradually giving way to Carr.  According to Jenkins, Nucleus ‘was originally intended as a collective, not Carr’s baby’. Jenkins feels that the Penumbra II music is very close to what he wrote for Nucleus or Soft Machine and as such is an interesting addition to early Nucleus studies

Jenkins looks back fifty years at the period of jazz fusion with fondness. ‘The best in that genre was great – not just us but other people, beginning with Miles and everything that followed, Tony Williams’ band, Herbie Hancock, Weather Report.  It was a great period.’