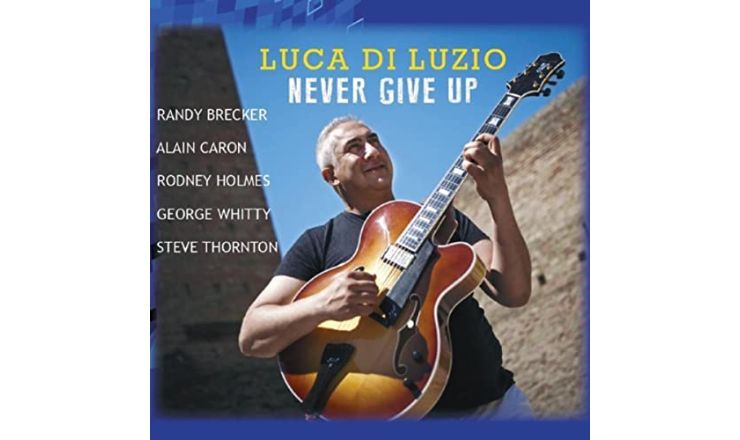 He’s gathered some old friends including Randy Brecker on trumpet for his newest album NEVER GIVE UP. ‘Lauderdale’ was written for Fort Lauderdale; Randy Brecker’s hometown. Luca solos beautifully on this. Manuel Trabucco has the only alto sax solo on the album and it’s a winner.

Luca wrote all of the songs on the album. Inspiration for some of them came from people he knew. ‘Verso Sera’ (Towards Evening) is a slow beautiful melody. In the evening Luca says he will often think about all the special people he’s known. You’re not going to find a much better trumpet player than Randy Brecker and the solo he does on this song may be the prettiest solo on the album.

In interviews Luca di Luzio has said he loves playing in big bands. NEVER GIVE UP is a quintet with a big band feel. The small horn section helps. There’s a lot of electronics on this album so you can’t help but think about the fusion bands of the eighties.

Alain Caron is a very tasty electric bass player. He doesn’t show off. All his solos seem to perfectly fit the mood of the song.

Rodney Holmes is considered one of the best drummers in the world. He’s worked with Santana, Michael Brecker, Wayne Shorter, Joe Zawinul, Maceo Parker, Al Jarreau, Bill Evans and many others. I think his playing is way too busy on NEVER GIVE UP. This is supposed to be a guitar-led group. If you didn’t see the CD cover you might think the drummer is leading the session.

My biggest problem is with George Whitty. He’s on keyboards and he did all of the mixing and the arrangements. Everybody sounds like they’re mixed at the same level. Sometimes it’s hard to find the guitar in the mix! The drums are way too loud. Steve Thornton on percussion is good but it would sound better if it wasn’t so high in the mix.

By the end of the album I was ready to walk over and unplug Whitty’s keyboard. It’s too loud and his solos are incorrigible.

There’s a sameness to the arrangements. How about a trio piece with Luca, bass and drums? Maybe a regular piano on one or two of the songs?

I like Luca di Luzio’s guitar playing very much. I wish there was more of it on this album.