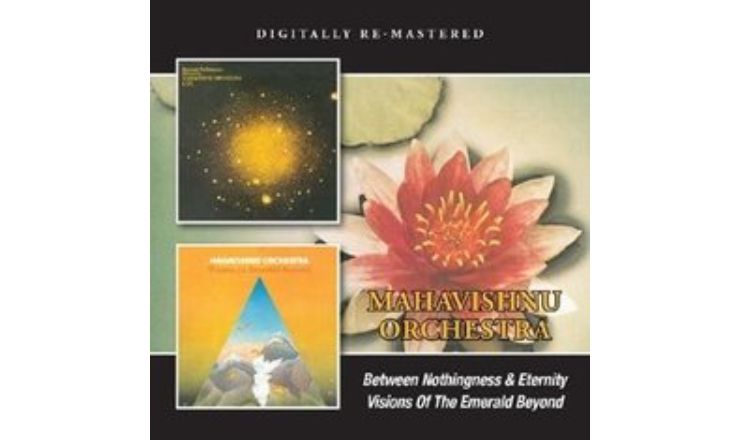 Visions of the Emerald Beyond

The Mahavishnu Orchestra was one of the seminal jazz/rock outfits to emerge from the coterie of players that Miles Davis had surrounded himself when making his own classic albums, and helping define the genre. Along with Herbie Hancock’s Headhunters, Chick Corea’s Return to Forever, and Zawinul and Wayne Shorter’s Weather Report, McLaughlin’s group went on to great commercial success finding an audience for their music outside of the confines of jazz and garnering major label support for their efforts.

Often derided at the time, and indeed still sneered at by purists today, as with any area of the music the passing of time has confirmed that there are some real gems that have held up well along with some albums that have passed their shelf life and should now perhaps remain confined to the vaults. In the reissuing of these two releases from the Orchestra we have the opportunity to hear the best and worst of the band and the genre pretty much evenly distributed across both albums.

The earlier album, Between Nothingness & Eternity, is a live set that released as a stop gap as the sessions that allocated for the group’s third studio recording had yielded little in the way of usable material. The tunes heard, listed in the credits as three tracks, but each in fact containing multiple themes had all been attempted in the aborted studio sessions and come at a time when the pressures and tensions within the group would engineer its own demise. Some of this tension can be felt in these performances, but the virtuosity of the musicians, by and large, overcome the personal difficulties to present music of great intensity. That said, some of the tracks are overlong, a failing of the times, and could have benefitted from some vigorous editing.

With the end of the first version of the band, McLaughlin soon put together a revised and expanded line up. Immediately this benefits from the presence of electric violinist, Jean-Luc Ponty, who was John’s first choice for the original group. Ponty’s electric instrument is far more suited to the overall group sound, and whether shadowing the guitar lines or in his own well constructed solos his playing is a marvel.

This is not to say that there is not some real tosh on Visions of the Emerald Beyond, I could certainly do without the singing, but the expanded Orchestra seem to smooth out the ensemble without sacrificing grit and power when required. Tracks such as ‘Lila’s Dance’ fill all expectations with catchy riffs and themes with top notch solos from the leader and Jean-Luc Ponty, the tongue in cheek (?) two minute ‘Can’t Stand Your Funk’, and bass driven ‘Cosmic Strut’. The more reflective side of the group is captured on ‘Pastoral’ again featuring Ponty, and McLaughlin’s 12 string acoustic guitar on ‘Faith’.

Of the two, the live set can be a little self-indulgent, and the superficial effects and orchestration mar Visions but of the two (although it has been much maligned by critics in the past), the studio set is the disc that will find its way to my CD player on a more regular basis.