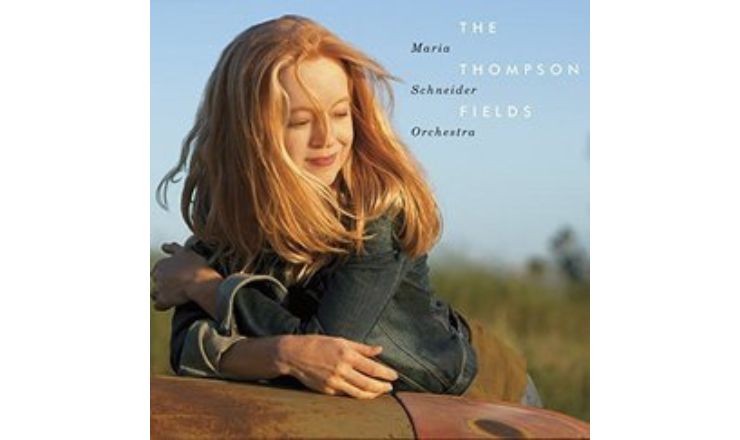 Winning a Grammy is an achievement for any jazz artist with taste and principles. ‘The Thompson Fields’ is Maria Schneider’s latest album and the one that received the accolade from the Grammy judges.

artistShare is how Maria Schneider distributes her music and that gives her control of the production, recording and distribution. Financing music from sponsors across the world, through artistShare is crowd funding before it became commonplace.

Before we get to the music, the album as artefact is worth a comment. Schneider’s album is beautifully designed, probably the most striking I have ever seen. The text by Schneider describes the inspirations of the various pieces. The fields that influenced the music are located around Windom in Minnesota, Schneider’s home area. Images of the natural world and colourful pictures of birds from across the world enliven the pages. There are maps and poems as well. I am particularly grateful to be introduced to the poems of Ted Kooser.

Maria Schneider is bringing unique qualities to jazz. The sound of her orchestra has a richness and maturity. Her writing for brass, especially for flugel horns, gives the music remarkable softness, suppleness and mellowness that is distinctive.

We are used to hearing jazz from the coasts especially the big urban centres. This is music that celebrates the prairies and the Great Plains. Schneider writes well and invites us to imagine her childhood, the fields where she grew up, places where you can observe birds. This is programme music of the highest order.

Ted Kooser’s short poem ‘Walking By Flashlight’ inspires the first track. The solo is taken by Scott Robinson on alto clarinet. His solo replicates carefully the meditative mood of the short poem.

‘The Monarch and the Milkweed’ features Greg Gisbert on flugelhorn and Marshall Gilkes on trombone. The ecologically minded Schneider, in the album notes, warns about the fate of the butterfly which depends on the declining prairie milkweed for survival.

In ‘The Arbiter’s of Evolution’ the music is based around the mating of the birds of paradise. The gaudy plumage of the male is contrasted with the dowdy female. Scott Robinson on baritone and Donny McCaslin on tenor evoke the ornate flamboyance of the birds.

‘The Thompson Fields’ has Frank Kimbrough’s piano impressionistically describing the land and the wind rippling the grass in the fields of the Thompson farm. Lage Lund’s country jazz solo guitar seems to have been inspired by Bill Frisell. The Thompsons whose farm had such an impact on Schneider are acutely ecologically aware and make every effort to conserve the natural world around their farm.

George Wein gave Schneider one of her first breaks so she rewards him with the dedication on the piece ‘Home’. It opens with a solemn chorale and the bass trombones underpin everything. Frank Kimbrough’s piano spports the whole piece, as indeed he does the whole album, but it is the tenor of Rich Perry that has the main statement.

The clouds and storms in the Mid-West are important and the writing for the saxophones at the beginning of the piece ‘Nimbus’ have the slightly menacing quality of an approaching storm before Steve Wilson on alto intervenes. Clarence Penn on drums takes the opportunity to increase the ominous feeling.

‘Potter’s Song’, is dedicated to trumpeter Laurie Frink who played in the orchestra for many years and was also a potter. In fact, the whole album is dedicated to Laurie who died in 2013. The main solo is played by Gary Versace on accordion. The soft sound of the accordion has an elegiac country feel.

Ryan Kerbele on trombone and Jay Anderson on bass with Clarence Penn creating the samba rhythm dominate ‘Lembranca’. The change of tempo is welcome. Schneider’s music is not always vigorous rhythmically.

Schneider has moved a great distance from the traditional jazz big band. Some would argue too far. Often compared to Gil Evans, if that is true, it will be to the early Gil Evans. I cannot imagine that she would have been entirely happy with the music of post 1970 Gil with its rampant freedom. She is intent on exploring new areas. Already she has worked with soprano Dawn Upshaw, the Australian Chamber Orchestra and the Saint Paul Chamber Orchestra.

Schneider is stretching the boundaries of jazz just as radically but not as obviously as any jazz pioneer. There is a sense that the real purpose of her music is the creation of the handsome sounds. At times what the orchestra produces is as remarkable as anything we have heard from a jazz orchestra. The music, the compositions, the writing dominates. The soloists are virtuosos with formidable techniques but sometimes you long for the individuality of tone of a Hawkins, Hodges, Dolphy, Gonsalves, Webster or Getz. Throughout the album there is a feeling of control, no rough edges, little spontaneity. The geographical centre of Schneider’s music has already started to move away from the cities on the west and east coasts. Schneider’s heart is in producing new music from flora and fauna, from the core states of America, the farms, the big spaces, the small towns, that part of America where most of America lives.

It will be fascinating to see and hear how the music of Maria Schneider evolves. ‘The Thompson Fields’ is an achievement in so many ways.