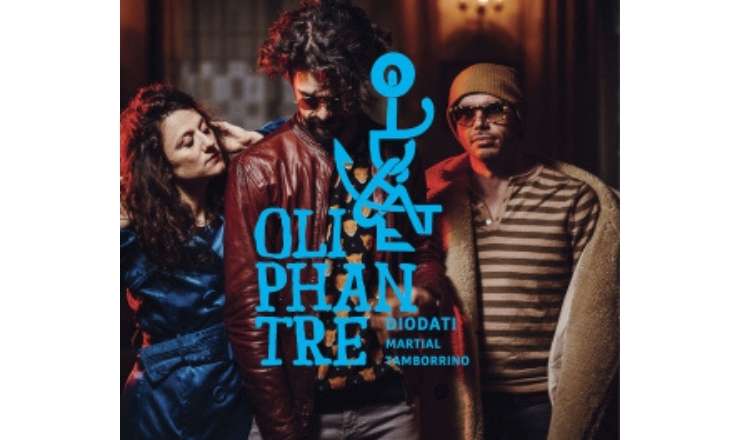 Meld modern, musical idioms with those of a more traditional custom

The trio consists of three of the leading, new generation musicians in Europe.  What they give up, live, is an extraordinary performance of exceptional and original exquisiteness.  This they have regenerated for Oliphantre which is volatile and disquieting, yet very much idealistic.

Ideas hip, hop and jump into previously unheard constructions of hot rock and violent punk and the jazz groove puts it all together as it blends harmony and improvisation with innate spontaneity.

The trio are completely at ease in the jazz soundscape and its terroir, and they understand how to meld modern, musical idioms with those of a more traditional custom.  All three musicians deploy great vigour in their playing and are extremely gifted and polished improvisors.

These three artists hail from much varied musical backgrounds and this of course lends a ‘Technicolor Dreamcoat’ shimmer to their creations.  Francesco Diodati is leader of several projects and a permanent collaborator of the Enrico Rava bands since 2013.

His work generally revolves around a focus on improvisation and instant composition worked with collective writing and toned by the timbres of prepared instruments, including alternative tunings.

His guitar brings a multi-layered and polished structure to the music as well as opening it up to freedom of interpretation.

Diodati is accompanied by Stefano Tamborrino, who is recognised as one of the most innovative drummers at the moment, and by the scary voice of the astounding Leïla Martial.

She is seen as a rising star of jazz in France and Europe.  She is widely experienced, and her collaborations range from Inuit music (largely Canada and Greenland) and the AKA pygmy tribes (Central African Republic and Republic of the Congo) to contemporary music projects.  She is leader of the Baa Box project.

At some time during the performance, you will hear an extraordinary musical contretemps between Leïla’s voice and the thrilled drumming of Stefano.  She is an anarchist, a conjurer, a joker and quite possibly, a slackliner too.  She rounds off the efforts of the trio and makes it into a performance like no other.  I was enthralled.