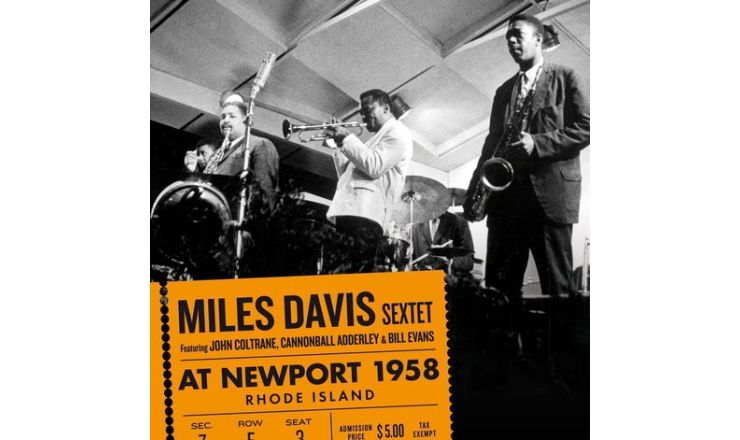 You will have almost certainly seen part of the Newport Jazz Festival of 1958 because the film ‘Jazz On A Summer’s Day’ was recorded there. Unfortunately, the Miles Davis Sextet was not featured. What a mistake! Davis produced some great groups but this Davis group proved to be one of his most remarkable groups and one of the most remarkable in the whole of jazz. Davis was surround by equals. That never happened again. Eight months after this appearance the same group recorded ‘Kind of Blue’ a completely different kind of jazz.

Davis often seemed to have a chip on his shoulder; it shows itself here by the aggressive way the whole group tears into the first piece Charlie Parker’s ‘Ah-Leu-Cha’. The tempo is fierce in the ‘I’ll show everyone manner’. They do. Miles’ playing is better than ever, he has sorted his technical difficulties and at this time technically he plays at his best. Coltrane has ‘One Bass Hit’ to himself and he shows all the virtues that he would explore in the next few years. His solo on ‘Bye Bye Blackbird’ is remarkably fluent. Bill Evans seems calm in the middle of some ferocity. Jimmy Cobb contributes some of the aggression and he is very well recorded making you realise what an accomplished bop drummer he is. Cannonball Adderley brings his own brand of effervescent joy to the whole set.

We are used to the epithet: all-star group. This really is.

Willis Conover who is now largely forgotten was a remarkable man. He introduces the band. For years he hosted a nightly jazz programme on the VOA (Voice of America). The programme was broadcast all across the world and for many outside the US he was their introduction to jazz. The programme was never broadcast in the US so most Americans were unaware of Conover’s vast contribution to jazz.

If you don’t have this music, you should acquire it. The CD is accompanied by a booklet which has the original liner notes . The quality of the recording is good.

One note of caution! The Newport tracks were issued recently on the box set: ‘Miles Davis At Newport 1955- 1975’.