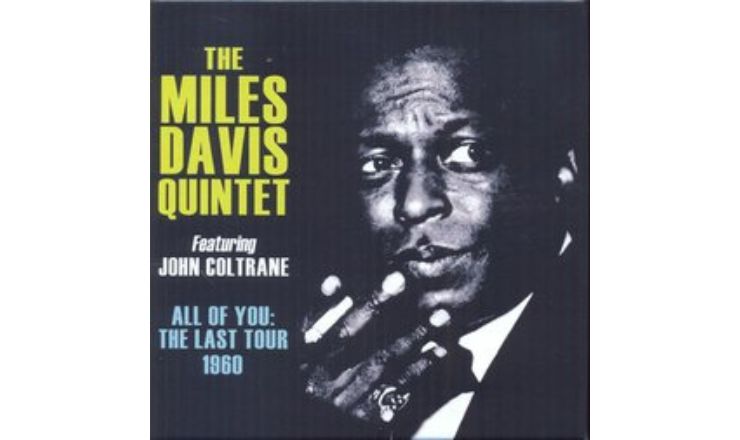 After five years in the quintet and sextets of Miles Davis, in was inevitable that the time would come that Coltrane would want to cut loose and form his own band. It was equally inevitable the Miles would wish to put off the saxophonist’s departure as long as possible, and the breaking point came early in 1960.

With Coltrane now eager to go his own way and form his own band, Davis persuaded him to remain with the quintet for a tour of Europe that was planned, and with great reluctance the saxophonist agreed. Many of the concerts were recorded and have been around in bootleg form for many years, but this is the first time that they have been presented as a single package and with considerably better sound quality than had previously been available.

The result is a four CD set containing over four and half hours of live music from the quintet at various locations, and if the quality of the fidelity does dip and waver in places this is barely noticeable after a couple of hearings, as the quality of the music prevails.

Miles plays with great authority and creativity throughout. It is almost as if he feels that if he constantly creates and challenges the tenorist that he may persuade him to stay a little longer. From the outset of his solo on ‘So What’ from the first performance in Stockholm, Trane sets out his stall. He solos at length, as he does on all of these titles, and is constantly pushing himself to the outer reaches of his considerable abilities. ‘All Blues’ from the same performance finds Coltrane experimenting at length with split tones and multiphonics, and a the tour progresses it is readily heard how the saxophonist is using his solos as a means of wood-shedding prior to his departure.

This must have come as a shock to the audience, as they would have not have heard this side of the saxophonist as the delay in between release dates meant that many recent recordings had not yet filtered through to Europe. Undeterred, Coltrane powers through his solos, audibly working on his sheets of sound, and many familiar patterns and licks are heard that would evolve in Coltrane’s highly personal vocabulary in the coming years. If Miles was becoming more animated and daring in his own solos, then the saxophonist is clearly pushing at the boundaries, and when it comes to Wynton Kelly’s turn to solo, and the horns fall silent, it comes as a relief and release from the intensity of what came before, and the kistener can sit back and relax in a more settled and familiar groove.

By this juncture of the quintet’s existence the repertoire was fairly fixed, and whilst there are multiple versions of many of the titles, the performances are never repetitive. The musicians are constantly reinventing the pieces from night to night, and the two versions of ”Round Midnight’ are so far removed from Miles original recording for Columbia some five years earlier, as to be almost completely different pieces. Another delightful surprise on Miles solo on ‘Walkin’ from the 2nd House performance on 21st March, is hearing Miles quoting ‘Jean Pierre’; a tune that he would not record until the 1980’s.

With so much Miles and Coltrane currently available some may baulk at the idea of wading through another weighty box set, but in truth this release is more than worthy of your consideration documenting in impressive detail the final throes of one of the truly great front line partnerships in jazz.