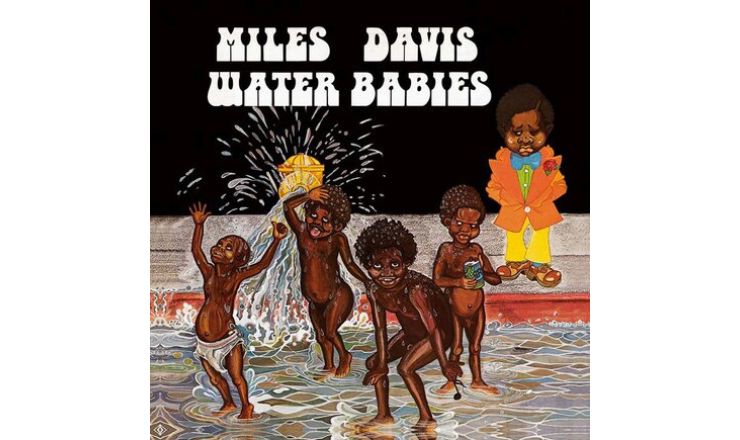 Water Babies was recorded as Miles group was in transition from “The Second Great Quintet” of side one to the more electric semi rock orientated releases reflected with the addition of Chick Corea and Dave Holland on side two. The step change was completed with the arrival of “In a Silent Way” from February 1969 and the big game changer “Bitches Brew” in August of the same year. Why Columbia waited almost a decade to release these sides we do not know. When the disc finally reached the record stores in 1976 it was almost a retrospective as the band were totally within the maelstrom of sound contained in ” Pangaea” of 76 and “Dark Magus” from 77. Four of the five tracks here are from the pen of Wayne Shorter who at the time was somewhere near the peak of his very considerable composing powers. The closing track is listed as being written by one Mr W. Process. It was in fact by Miles himself, the word “Tillman” in the title being contained in the full name of Tony Williams father. Some critics label the album as a compilation, and although a little understandable, that description certainly demeans it’s perceived stature to some. The Side A compositions are from the “Nefertiti” and “Kilimanjaro” sessions and although omitted from the final cuts, are still fine examples of the stratospheric heights this band reached within the late sixties period. The Side B pieces are an important gateway into the later 1969 masterpieces. All the tracks here were produced by Teo Macero and recorded by Columbia in New York at their famous Studio B and 30th Street studios.

Both the title track and the Billie Strayhorn tribute “Sweet Pea”on Side A find the whole band at their magnificent best. These are relatively low tempo pieces and portray an immense atmosphere of melancholy with Wayne’s tenor at it’s most sinuous and Miles, once described by an American journalist as “Like a man playing on the edge of The World”, sharing the honours with Herbie’s probing piano, Ron Carter’s rock like bass and Tony Williams displaying all the trait’s that made him one of the most creative drummers. Capricorn is far more strident with Miles opening solo unusually looking back to his more straight ahead days, over very strong bass lines, Wayne’s full on scrambling interlude and Herbie’s lengthy solo which seems to center things, before the horns come together to reprise the theme and play out.

With Chick Corea on electric piano, the addition of Dave Holland plus Wayne Shorter reverting to soprano at times, Side B has an entirely different ambiance over it’s two lengthy titles. “Two Faced”, another gem written by the saxophonist, features minimalist, subdued and at times mysterious contributions from both electric keyboards, short stabbing runs from Miles, a searching solo from Wayne and Tony Williams residing in a whole wonderful world of his own. All this resulting in a clear signpost to the forthcoming 1969 gems. The disc signs off with Miles composition, the strangely named “Dual Mr Tillman Anthony” The clarion call of some fine open trumpet from the leader is a pathway to some of Chick Corea’s finest excursions on electric piano. The pianist himself often claimed to be uncomfortable within Miles groups of the period but certainly reached the heights on this occasion. Ron Carter’s bass keeps everything in check as Wayne Shorter, for much of the time on soprano, investigates the outer reaches of the composition. All this is once again against the background of yet another lesson in creative drumming from Tony Williams.

In summary this is a fine example of the transition from an advanced form of hard bop to the early stages of electronica from a group of some of the finest musicians ever and also includes as a small bonus some iconic cover art by Corky McCoy.