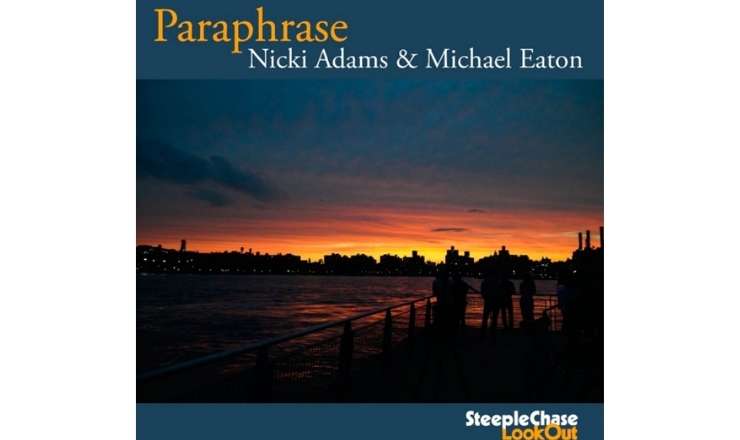 An impressive debut recital of chamber style music which fascinates from start to finish!

Newcomers, Adams and Eaton, the former in his mid-thirties, the latter just into his forties, came of age musically when contemporary jazz was losing its fascination with disco and rock tropes, re-affirming its core values whilst clothing them in post -modern guises and eclectic borrowings.

This is the artistic ethos that informs this impressive debut recital of chamber style music which fascinates from start to finish.

In his discursive booklet notes, Eaton outlines the influences they draw upon and how they combined these to produce musical statements that enlarge upon their source materials to reveal new possibilities in terms of harmony and rhythm as well as investing them with original material and extemporisations.

Their sources are compositions from the modern jazz repertoire by Wayne Shorter, Andrew Hill, Thelonious Monk and, inevitably, John Coltrane.

To these they add a trio of originals and a ballad by Tim Hagans which sounds a bit like a conflation of two Coltrane classics, namely `Giant Steps` and `Naima`.

In the main, the melodies are articulated by Eaton who produces an unadorned legit sound; a hollow timbre with a tincture of vibrato largely devoid of emotive effects which, though it doesn’t particularly beguile the ear, gets his ideas across with clarity.

This is after all music for serious listening rather than providing cocktail party ambience.

In striking and perfect contrast, Adams, whose role is to provide harmonic and rhythmic support as well contributing solo passages, creates shimmering, arpeggiated tapestries with tremolando bass lines to both underpin and offset the more solemn sound of the sax.

Into these he works diverse classical allusions and actual quotations from works by Debussy, Liszt, Bartok, with nods in the direction of Berg and Schoenberg, splicing them with teasingly impudent passages of stride piano and bop phrases.

It all fits perfectly and sounds totally idiomatic; make no mistake, this isn’t a novelty jazzing the classics exercise and for many ears these allusions will pass unrecognised apart from the brilliant way the music unfolds:

Adams being well versed in classical technique clearly has this music in his fingertips and it flows from them with brilliant virtuosity.

To cite but two numbers to illustrate their collaborative working method I would take `Criss Cross` in which the sax conveys Monk’s angular phrasing and fragmented progressions whilst riding on undulating references to pieces by Debussy and Liszt.

A further example is Wayne Shorter’s `Iris` in which Eaton articulates the melody line in a stimulating encounter with Bela Bartok’s second piano etude.

Though the music is unashamedly cerebral it isn’t without spontaneity and dash and there is plenty in the way of unbridled improvisation which is particularly evident in the final number, an Eaton original inspired by the philosophy of Edmund Husserl and based on `All The Things You Are`.

It has a flavour of Schoenberg’s serial music but also elements free-form jazz and brings to a close a truly intriguing set of music from two talented newcomers of whom we are sure to be hearing more before very long.