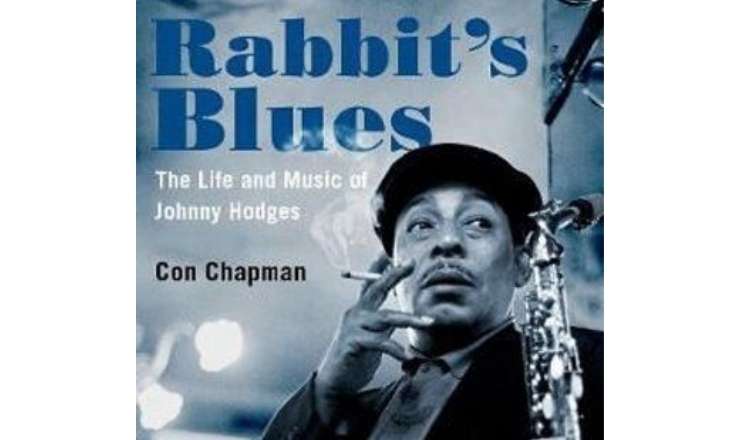 Johnny Hodges was an enigma.  There is always the hope that a book might unravel the jazz sphinx.

Hodges joined the Ellington band in 1928 and remained there, apart from four years leading his own band, until his death in 1970.

Ellington was quite happy to allow his musicians to make their own records away from the band and many of them did, so Hodges had quite an extensive discography of his own.

Con Chapman sketches out the early years of Hodges in Boston and attempts to answer why he was given the nickname of Rabbit.

Chapman’s research suggests that Hodges shared a teacher with Harry Carney.  Apparently, there were so many saxophonists in their area of Boston that it was known as a saxophone ghetto.

One of the first players to influence Hodges was Sydney Bechet. Hodges remarked: ‘Sydney Bechet is tops in my book, he schooled me a whole lot.’

Undoubtedly, the New Orleans musician who excelled on the soprano saxophone was one of the strongest voices in jazz and he certainly marked the style of Hodges.

Bechet was too strong a personality to last long with Ellington.  Hodges, who had a strong sound, joined Ellington in 1928 when he was 21.  ‘Tishomingo Blues’ was one of his first featured solos.

One of the criticisms of Hodges is that he changed little over the years. Chapman quotes a contrary view from critic Benny Green. Green argues that it is not the artist’s duty to keep abreast of the times but rather to preserve the homogeneity of his own style.

Jazz, in Green’s view, evolves but its individuals do not, in the sense that once a musician has acquired the nuances of his own generation, they are his for the rest of his life.

Relationships with children were a problem.

The children lamented the fact that he was often absent.’. He wasn’t a very talkative individual,’ daughter Lorna said. Lorna who studied music and dance at Juilliard tried to talk to him about music.

He would say that he did not know what she was talking about technically.

The relationship between Hodges and Billy Strayhorn was crucial because Strayhorn wrote some of his best pieces for Hodges: ‘Blood Count’, ‘Passion Flower’, Day Dream’.

Chapman in an effort to explain the relationship makes some superficial comparison: they were both short, both liked scents, both were romantics and both resented how Ellington treated them at various times.

Chapman explains what really did unite them was a love of sensuous melodies.  It was Hodges who played on ‘Half the Fun’ in the Shakespeare Suite evoking the barge as Cleopatra and Antony are ferried down the Nile.

Norman Granz the jazz impresario who started Verve and Clef sensed that Hodges was unhappy with Ellington.  In 1951 he induced Hodges to leave and to take other musicians with him.

Ellington was very resentful because he had always been generous in allowing musicians to make their own records.  Soon Hodges and his small group had a hit record with ‘Castle Rock’.

For a time, Hodges even had John Coltrane in his band. According to Chapman, Coltrane was sacked when his heroin habit became too obvious and affected his work.

That was just one problem that Hodges had to deal with.  Hodges was not a natural leader and did not have a rapport with the audience.

He found the administration difficult and Chapman quotes Hodges as saying he had six headaches and he gained more understanding of Ellington who successfully dealt with many more headaches.

The return of Hodges in 1955 to the Ellington band was arranged by his wife Cue Hodges who phoned Ellington.

According to Chapman, Mrs Hodges thought that Johnny with his own band would make real money and it was when she realised that the independent life was more difficult, she knew that her husband would have to return.

In 1956 the Ellington band’s appearance at Newport with Hodges on ‘Jeep’s Blues’ and Paul Gonsalves with a marathon solo revitalised the band.

Charlie Parker’s arrival in the forties was a challenge. Chapman describes the difference between Hodges and Parker.  It is a pity that he does not mention the Norman Granz Jam Sessions where Parker and Hodges play side by side on ‘Funky Blues’.

The difference between the two great altoists is very clear.

The way that Hodges worked away from the Ellington band is explained: the fruitful relationship he had with Wild Bill Davis and the way that he set up sessions with Ellington colleagues on albums such as ‘The Duke’s in Bed’, ‘The Big Sound’, ‘Not So Dukish’, ‘Johnny Hodges with Billy Strayhorn and the Orchestra’, ‘Cue For Saxophone’, ‘Duke With A Difference’.

The relationship between Ellington and Hodges was complex.

Chapman believes that Hodges was unhappy with some of the music, he liked simplicity, and he did not approve of Ellington’s highbrow aspirations.

Chapman writes well about the events surrounding the albums ‘Back to Back’ and ‘Side by Side’.  It was an album where the two men had space and time to explore their musical relationship.

Towards the end of his life Hodges became curmudgeonly and difficult.  Ellington tolerated him. Duke’s regard can be inferred because he apparently kept a copy of the funeral oration he wrote for Hodges close to him for the rest of his life.

When Ellington was preparing ‘The New Orleans Suite’ in 1970 which opens with Hodges on ‘Blues For New Orleans’, he hoped that he could persuade Hodges to bring out his soprano saxophone on the piece ‘Portrait of Sydney Bechet’.

Hodges died on May 11th 1970 two days before the recording of the tribute to Bechet.

The index of the book is not particularly good. Some important areas are missed. ‘The Far East Suite’ is regarded as the peak of Ellington’s work in the 1960’s and contains one of Hodges’ greatest solos on ‘Isfahan’.

The film score for ‘Anatomy of A Murder’ is not even mentioned and that contains a memorable solo. ‘Flirtibird’ is Hodges accompanying Lee Remick as she sashays across the screen: image and music inseparable, once seen and heard, never to be forgotten.

Chapman does illuminate Hodges early life but he does not penetrate the enigma.

Hodges was an important player and a crucial part of the Ellington band. There are too many areas that are missed. Chapman’s attempts to make his work scholarly by sprinkling it with classical references Telemachus, Antisthenes, Aristotle, seem inappropriate.

However, overall, this is a good account of a great musician but we will have to wait for the definitive book.

“Never the world’s most highly animated showman or greatest stage personality, but a tone so beautiful it sometimes brought tears to the eyes – this was Johnny Hodges. This is Johnny Hodges.

Because of this great loss, our band will never sound the same.

Johnny Hodges and his unique tonal personality have gone to join the ever so few inimitables – those whose sounds stand unimitated, to say the least – Art Tatum, Sydney Bechet, Django Reinhardt, Billy Strayhorn…

Johnny Hodges sometimes sounded beautiful, sometimes romantic, and sometimes people spoke of his tone as being sensuous. I’ve heard women say his tone was so compelling.

He played numbers like ‘Jeep’s Blues’, ‘Things Ain’t What They Used To Be’, ‘I Let A Song Go Out Of My Heart’, ‘All Of Me’, ‘On The Sunny Side Of The Street’, Billy Strayhorn’s ‘Passion Flower’, and ‘Day Dream’ and many more.

With the exception of a year or so, almost his entire career was with us. Many came and left, sometimes to return.

So far as our wonderful listening audience was concerned, there was a great feeling of expectancy when they looked up and saw Johnny Hodges sitting in the middle of the saxophone section, in the front row.

I am glad and thankful that I had the privilege of presenting Johnny Hodges for forty years, night after night. I imagine I have been much envied, but thanks to God….

May God bless this beautiful giant in his own identity. God Bless Johnny Hodges.”