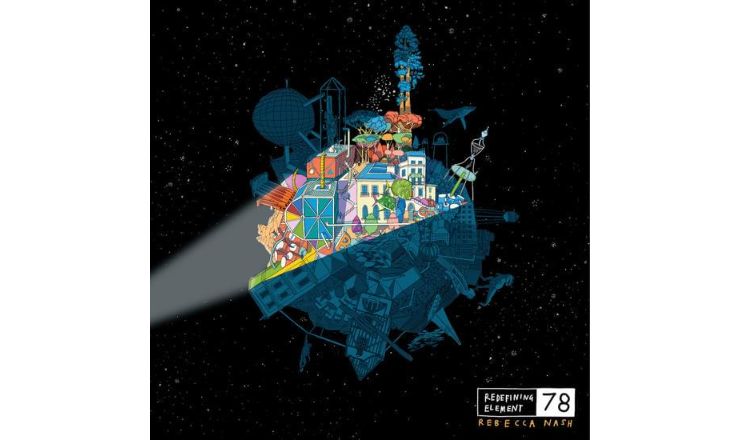 This enticing and unpredictable album sees British pianist-composer Rebecca Nash embarking on new musical territory, spotlighting her distinct compositional voice and identity. This 8-track suite explores structures of sound and science; Nash was inspired by John O’Gallagher’s work on tone rows and sought to investigate how this approach could be adapted to the atomic numbers of six rare metals.

Commissioned by the Bristol Jazz Festival, the album features John O’Gallagher on alto saxophone, Jamie Leeming on guitar, trumpeter Nick Malcolm, Paul Michael on bass and Matt Fisher on drums. Shifting away from her motivically driven and rich harmonic 2019 record Peaceful King, Redefining Element 78 is spontaneous and experimental at points, whilst also being meticulously planned and through-composed. Nash finds the balance between these two extremes, meandering between cleverly written motivic moments and simultaneous free improvisation.

‘Platinum I’ feels like a condensed overture, boldly stating the key melodic material that becomes an integral part of the album as a whole. This 5-note motif materializes amongst the ongoing free improvisation that’s being passed between the musicians. Nick Malcolm goes on to take the lead in an unaccompanied introduction to ‘Osmium’- a moment of true improvisational and stylistic virtuosity. This moment makes effective use of sound and silence, almost like a monophonic pause before the textural business that is soon to follow. The way Nash patches together composed material with the improvised is seamless; we are passed on to each solo, each new motif, and each modulation with such finesse.

‘Rhodium’ is a clear example of this. A gritty bass introduction brings us to a hard-hitting horn-driven motif, preparing us for the intensity of Leeming’s distorted guitar solo and interweaving electronic sound effects. This is followed by a sensational saxophone solo by O’Gallagher, exploring every inch of the instrument in its full glory.

‘Iridium II’ spotlights Nash’s virtuoso; a seemingly retrospective piano break between the highs and lows of the record, which is maintained through the starting minutes of ‘Ruthenium’. The band makes a memorable melodic statement before Nash takes us on a tonally ambiguous journey, paving the way for O’Gallagher’s angular and explorative improvisation. A softer tone is adopted by O’Gallagher in ‘Iridium I’, becoming more lyrical and melancholic at points. This unaccompanied introduction parallels the standstill in ‘Osmium’, once again demonstrating Nash’s compositional storyline which brings all these pieces together. ‘Iridium I’ beautifully examines the importance of performance techniques, uncovering new sounds and styles which simply add to the quality of the music itself- heard particularly in Fisher’s exciting drum interlude.

‘Platinum II’ is an extended finale, opening with a floaty and ornate piano summation of all the pieces before bringing us to the main theme. This track intensely builds, from what can be heard as quite a tranquil piano solo, to a climactic ending featuring several of the musicians improvising at once. Nash knows how to create excitement in her music through drastic contrast, as well as knowing when to pull back the musicians when things get too wild. ‘Palladium ~Noble Heart’ is a charming end to the record- introspective, dulcet and a great indication of the band’s chemistry.

It is clear to see that Nash is entering a new and exciting time in her artistic practice. Her compositions are enticing, particularly when learning how they came about and what inspired her to take certain musical avenues. However, it is also apparent that these musicians worked closely together to develop and arrange this fascinating album, something that can be heard in their musical chemistry. This makes for music that is fresh and in every sense of the word, unique, something that can continue to be expected from Nash’s daring and captivating compositions.