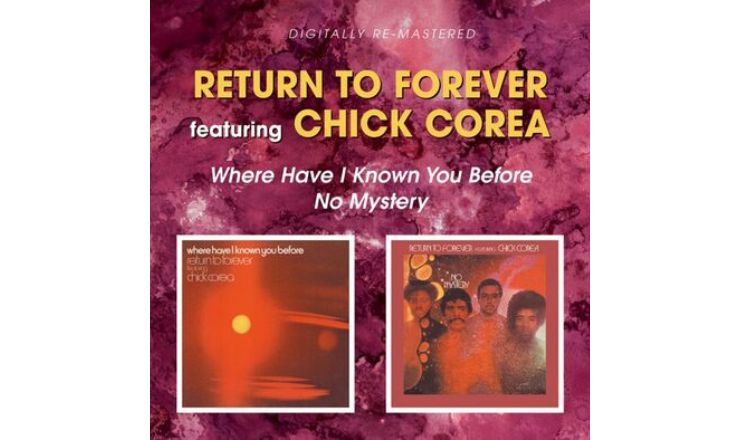 From day one, Return to Forever was Chick Corea’s band. In fact, what is often described as the band’s first album was in reality a Chick Corea solo album with the band’s title, and featuring musicians who formed the first incarnation of the group. The second album was billed ‘Chick Corea and Return To Forever,’ while albums three to five were titled ‘Return to Forever featuring Chick Corea.’ It wasn’t until the sixth album, Romantic Warrior, that Corea’s name vanished from the band title.

The first band included Brazilian musicians Flora Purim (on vocals) and Airto Moreira (percussion), as well as woodwind player Joe Farrell. The music had a Latin feel, but for the third album, Hymn of the Seventh Galaxy, Corea decided to move the band in a jack-rock fusion direction, with drummer Lenny White and guitarist Bill Connors joining the line-up. The two albums in this package represent the band’s third incarnation, with Connors replaced by the 19-year guitar prodigy Al DiMeola, and is often referred to as the ‘classic’ Return to Forever line-up. There were other changes too: Corea, who had previously played acoustic piano, electric piano and organ, added synthesisers (in the form of the ARP Odyssey and Minimoog) to the mix; Clarke focused more on the electric bass, and No Mystery featured solo compositions from all band members.

Where Have I Known You Before (the title was inspired by the lyrics of Corea’s friend Neville Potter) opens with a Stanley Clarke composition, ‘Vulcan Worlds’ (Clarke was clearly a Star Trek fan, as his second solo album included the tune ‘Vulcan Princess’). The music sets the template for Clarke’s signature 70s funk sound, with propulsive drumming, whirling synthesisers, screaming guitar lines and super-fast slap bass. The album is interspersed with three lovely, reflective solo acoustic piano pieces, each lasting one or two minutes, and having titles that begin with ‘Where Have I’ – the first is called ‘Where Have I Loved You Before.’ Lenny White’s ‘The Shadow of Lo’ begins with the sound of slow, shimmering electric piano, aching guitar lines and a long, sedate Minimoog solo, before bursting out into a funk workout.

Corea’s ‘Beyond The Seventh Galaxy’ is an exciting frenetic jazz-funk tune with a tense, nervous feel and White playing a ferocious backbeat, while ‘Earth Beat,’ composed by all four band members, sounds as if it emerged from a very productive jam session, and showcases the superb playing of DiMeola, who not only lays down a great slashing riff at the beginning, and delivers some searing guitar, but also plays a figure that burrows its way into your ears. And check out Clarke’s solid chugging bass line. The album ends with Corea’s14-minute ‘Song To The Pharaoh Kings, a suite-like number, that includes a long, slow, snaking synthesiser solo at the intro, which gradually increases in tempo, sounding almost baroque-like in places, before the rest of the band join in, sounding like they’re racing to catch up with a team of wild horses. The tune includes solos from Clarke, Corea and DiMeola, and ends with some frenzied synthesiser playing.

No Mystery is an album of two halves and that was literally the case in the days of two-sided vinyl records. The first five numbers (which were on side one of the LP) are jazz-funk or jazz-rock tunes, with the two opening songs on side two being acoustic. Clarke’s ‘Dayride’ starts with Corea riffing furiously on electric piano, before adding some funky synthesiser lines. There’s plenty of dextrous bass playing by Clarke, as well as scat vocals, and White handles the various time signatures with aplomb. ‘Jungle Waterfall’ is a wah-wah saturated funk tune with a churning rhythm, while DiMeola’s ‘Flight of the Newborn’ includes a bouncing bass line, screaming wah-wah guitar, and a lightning-fast solo from Clarke – it’s one of the best tunes on the album.

Lenny White’s delightfully titled ‘Sofistifunk’ has synthesiser lines darting about as if coming from an inter-galactic war ship, before settling down to a funk groove, with synthesisers and guitar darting across the soundscape. ‘Excerpt From The First Movement of Heavy Metal,’ a band composition, was clearly titled with tongue in cheek and sounds like a pastiche of some of the pompous-sounding music from bands such as Yes and ELP. From its bombastic solo piano intro to DiMeola’s rock-god-style guitar playing, this sounds like a fun jam session.

The title track is essential an acoustic trio piece, with Corea on piano, Clarke, double bass and DiMeola on guitar – White plays the occasional percussion. Clarke plays both arco and pizzicato bass, while DiMeola clearly demonstrates that he is the master of both acoustic and electric guitar, and plays the song’s lovely theme with Corea doubling up in places. Corea’s playing is, as ever, excellent. ‘Interplay’ written by Corea and Clarke, is an acoustic duet featuring the two musicians. It’s a short (two minutes in length) but moving piece, and one wishes it lasted longer. The 9-minute ‘Celebration Suite Part I’ is a Spanish-infused number with a dramatic opening, as White starts off with furious drum roll, and Corea injects some dark chords on organ. White breaks out into a marching drum pattern and Clarke lays down a heavy bass riff, as Corea plays the song’s Andalusian theme on synthesiser. ‘Celebration Suite Part II’ ends the album on an energetic note, with DiMeola’s screaming guitar and Corea’s searing synth lines overlaying a frantic rhythm section.

Like their contemporaries, Weather Report, Mahavishnu Orchestra and Headhunters, Return to Forever was a band of virtuosos that gelled and created exciting, energizing music. If jazz-rock fusion is your bag (as they used to say), you’ll find plenty to keep you entertained with this well-priced (£10) double CD package.