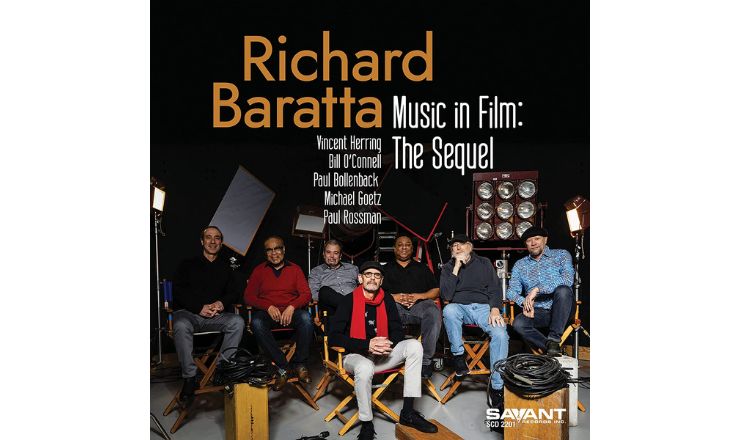 Had I not already completed my `Best of 2022` list this album would certainly have appeared in it.

The use of jazz and popular song to contextualise or periodise a cinematic narrative is almost as old as the genres themselves, their development being roughly contemporaneous. The list of collaborative exchanges between the two forms is endless and nearly always fruitful as is this new release by Richard Baratta, a musician well qualified to unite and mix the respective ingredients having spent the larger part of his working life in movie production management with involvement in more than a few blockbusters.

His musical career began in the New York `Loft Jazz Scene` of the 1970’s, where he played gigs with the likes of Billy Bang, Hal Galper and John Stubblefield. Though it offered exciting musical opportunities it was a precarious existence and the need for economic security prompted him make a career move into the movie industry.

This was to be his profession for the next 35 years but throughout he retained a passion for jazz which he returned to on his retirement in 2020 assembling a kick-ass hard-bop sextet and making a studio debut with an album of songs featured in movie soundtracks. That album, `Music in Film: The Reel Deal` was so successful that he has followed it with `The Sequel` which employs the same band, minus a vocalist, and is every bit as good. All the songs, bar one, have a movie association and his chosen repertoire makes for a delightfully varied programme full of interpretive surprises.

Baratta is a lively, adroit technician who makes his presence felt throughout with whip crack fills, pile driving paradiddles and a liberal helping of lightening breaks and killer solos. With his cousin at his side on congas quite a few of the numbers take on a Lat-Am flavour, percussive polyrhythms combined with the pianist’s montuno vamps very much in evidence.

The other dominant voice in the group is that of Vincent Herring, an energetic altoist who plays with the rapid fire attack of his acknowledged idol `Cannonball Adderley`, albeit with a slightly warmer timbre which he applies with suitable effect to ballad numbers like the wistful `Pure Imagination` from `Willy Wonka and the Chocolate Factory`.

Of the other numbers we get a tigerish `Pink Panther`, an arrangement of `Out of This World` which makes a feature of Bollenback’s luminous guitar sound, coming over with an extra-terrestrial Theremin effect like that often heard in Sci-Fi movies, and an easy rolling `You’ve Got a Friend in Me` with a solid Blakey like back beat.

Bollenback is a distinctive guitar stylist inhabiting a niche that lies between bop and country blues with tastefully applied rock licks here and there. His softer sound proves to be a perfect foil to Herring’s sharper edged wail.

An album highlight occurs when his salacious Delta blues phrasing strips their version of `Man of Constant Sorrow` of its customary cornpone piety and, like their manic foxtrot driven take on the `Cantina Band Theme` from `Star Wars`, complete with swanee whistle, raises a smile with its sheer audacity.

Alongside the cleverly contrived slapstick and cut-throat instrumental interplay there are a few quieter more introspective moments and the most powerful of these comes with the penultimate track, a piano trio version of Charlie Chaplin’s ballad `Smile`, a tune which appeared in a sinister context in the move `Joker`, Baratta’s most recent cinematic project.

Here it takes on a minor keymystique with O’Connell’s limpid piano interspersed with a series of mischievous drum breaks of increasing ingenuity and impressive dexterity. Overall however, the album’s defining characteristic is one of straight ahead swinging jazz in which everyone plays their socks off and gets to display their considerable talent in both the tight skilfully arranged ensemble passages and the generously allocated solo spaces, generating an all pervading feeling of life -affirming joie de vivre.

Had I not already completed my `Best of 2022` list this album would certainly have appeared in it: never mind, there is always next year and Baratta has promised more of the same, so bring it on – I’ll be listening.