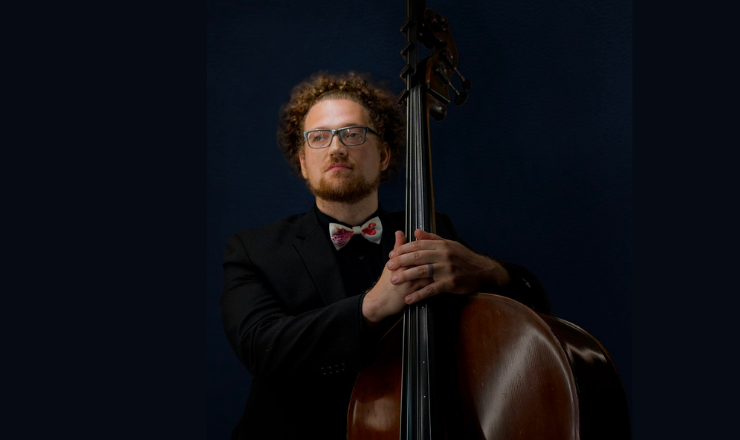 Coming off of a bold and unique new quartet album release, “Everything and Nothing”, he’ll be visiting the UK in November 2022 performing at Ashburton Arts on the 11th and Peggy’s Skylight on the 17th, as well as teaching and guest-conducting the Fleetville Swing Band.

He shares 10 albums that influenced his playing…

This album is a masterclass on interplay and improvisation.

With Mingus at the helm, Eric Dolphy, Ted Curson and Dannie Richmond seemed to have a telepathic connection on this date.

Although this is a studio album, Mingus talks to the “audience” as though it were a live show. They take the tried and true blues in F to a whole other level with “Folk Forms No. 1”.

Next is the famous “Fables of Faubus”, with the back and forth lyrics sung by Mingus and Dannie Richmond. “What Love” is a beautiful contrafact of  the standard “What Is This Thing Called Love”, where the trading between Mingus and Dolphy literally sounds like they’re talking on their instruments.

2. Charles Mingus – The Black Saint and the Sinner Lady

Yes, another Mingus album (honestly I could have filled all ten with Mingus).

The nearly 40 minute piece I think is the greatest long-form jazz composition of all time. Recorded by an 11-piece ensemble it features six movements over four tracks.

It has elements of classical, spanish and as Mingus put it “ethnic folk-dance music” but insanely it still swings.

If you’re a jazz fan you’ve undoubtedly listened to a lot of Paul Chambers, whether you wanted to or not.

He was one of the most in demand bassists of his time. Although he’s celebrated for his sideman work with everyone under the sun, he released more than a few albums as a leader. “Bass on Top” for me is the best of these. It’s a no-holds-barred bass extravaganza featuring some of the greatest bass solos and walking lines you’ll hear to this day.

I’ve spent many, many hours transcribing sections of this album. He’s accompanied  by Hank Jones, Kenny Burrell and Art Taylor.

4. Christian McBride – Gettin’ To It

Although I love pretty much every Christian McBride album, this was my introduction to him and I come back to it pretty frequently.

When I heard the track “In a Hurry”, all I could think was, “Wow, you can do that on double bass?!” I transcribed the bassline and arco solo over the whole track, note-for-note, from beginning to end.

The album features a mix of originals and standards, not least of which is a bass trio on Neal Hefti’s “Splanky”, featuring Milt Hinton and Ray Brown.

This album entirely features pieces and arrangements by one of the most underrated and unknown composers (and one of my absolute favs)  Bob Graettinger.

The screaming, crashing dissonances of the opening track “Thermopylae” will really wake you up in the morning. The three movements of the title track (actually four tracks) are a fantastic example of what can be accomplished with a long-form piece for jazz orchestra.

And it features probably the best-ever arrangement of “You Go to My Head”.

Everyone loves a little Dexter.

What’s not to love? His lines are just so clear and played with absolute intent. Unlike most tenor players, his lines translate really well to the double bass.

He’s accompanied by Horace Parlan, Tony Inzalaco and (the clincher for me) Niels-Henning Ørsted Pedersen. Niels was one of the greatest technicians of the double bass, and he absolutely SHREDS on an uptempo “So What”.

If you search hard enough you might be able to find a video of 19-year-old Shane performing this transcription.

This album, featuring George Coleman, Herbie Hancock, Tony Williams and one of the greatest walkers of all time, Ron Carter, consists of all the fastest tracks recorded at a performance at Lincoln Center in 1964 (the slower tracks were released on the album “My Funny Valentine”).

Listening and playing along with this album taught me a TON about how to play, and indeed how to hear, uptempo swing.

When I first heard this album I immediately became obsessed. Recorded in 2010 by the Jazz at Lincoln Center Orchestra, it’s a seven-movement suit (jazz suits are kind of a thing with JLCO) dedicated to master artists Chagall, Dali, Matisse, Monet, Picasso, Pollock and Van Gogh.

The whole suite was composed by one of my favorite current composers and arrangers, Ted Nash. I’ve learned a lot about big band composition studying this album.

9. Ron Escheste – In the Middle

This one is kind of a deep cut, and features the only electric bassist on this list, Todd Johnson.

You can’t find it on Spotify and is only available on CD (does anyone even own a working CD player anymore?).

It’s been described as the trio that sounds like a quartet. Between the low A string on the guitar, and the high C string of the bass, Eschete and Johnson are able to pass around basslines, chords and melodies seamlessly.

It’s not a gimmick at all, just seven standards of pure swing. I take a lot of my electric bass playing cues from Todd Johnson, one of the few electric players who, when I hear him, doesn’t make me wish he just played upright instead.

10. Wes Montgomery – Smokin’ at the Half Note

Our good friend Paul Chambers is back, along with Wynton Kelly and Jimmy Cobb. The groove throughout is absolutely infectious.

My favorite version of one of my favorite standards, “Four on Six”, is featured here.

The “No Blues” solo is, in my opinion, one of the greatest guitar solos of all time, featuring all of Wes’ classic lines, octaves and chord melodies.

This album frequently shows up on top-10 or top-50 (etc.) jazz lists, and for good reason.

Thanks to Shane for taking part!

You can find out more about his playing and upcoming tourdates via shaneallessio.com