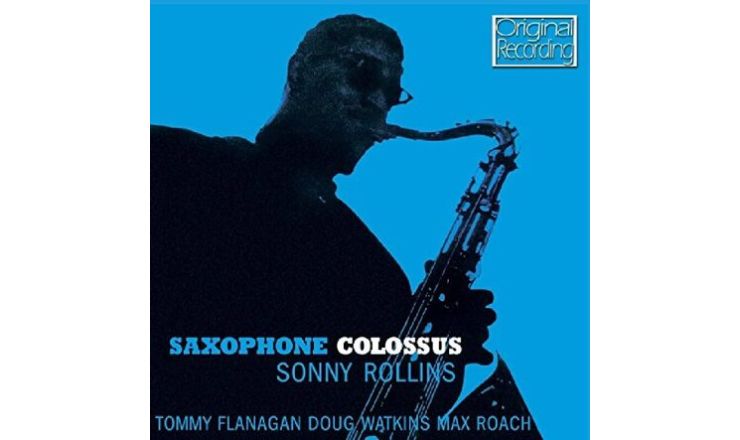 Sonny Rollins towers over the jazz of the last seventy years, like a Mount Rushmore statue. His leathery cavernous tone as wide as canyon; his melodic sense as mischievous as a young cat; his choice of themes as eccentric as Dali; his musicality as developed as Mozart. Under all of that was his searing self-lacerating honesty which at times dented his sense of purpose.

This album was recorded in a day at the Van Gelder studio in the living room of his parents’ home in Hackensack. He did not move to his purpose studio at until 1959. Vincent Pelote of the Institute of Jazz Studies at Rutgers University said: ‘When you get to someone like Van Gelder and you listen to his stuff, he becomes as important as the musicians because of the way he presents the music. I don’t even know how to really explain it other than with Van Gelder, you get a warmer sound. The instrumentation is set up in such a way that it’s more realistic to what you would normally hear.’ Van Gelder aimed for clarity, depth, warmth, and sonic detail.

Rollins came to this session after extensive work with the Clifford Brown- Max Roach Quintet. Earlier he had recorded with John Coltrane, Thelonious Monk and Miles Davis. This album was recorded only four days before Clifford Brown and Richie Powell were tragically killed in a car crash.

There are five tracks on the album, three of which are credited to Rollins. ‘St Thomas’ is a calypso-inspired piece named after St Thomas in the Virgin Islands. The tune is traditional and had already been recorded by Randy Weston in 1955 under the title “Fire Down There”. It is a wonderful tune which Rollins has used for the rest of this career. It has flavours of the Caribbean and an infectious rhythm which almost seems to demand dancing. The drumming of Max Roach sets a pattern that many have followed in subsequent years.

Rollins in an interview explained: ‘Well, the story is this: my mother comes from the Virgin Islands. The Virgin Islands were owned by the Danes at that time, they were the Danish Virgin Islands. The song was a Danish song called “Vive La Compagnie.” But I always called it “St. Thomas” because I didn’t know much about the islands; I wasn’t born there, my mother was. My mother would sing it, I’d hear her sing it. What I composed was a derivation of that Danish song, “Vive La Compagnie.” And I did several versions of it before I got it to be ‘St. Thomas’. I sort of arranged the melody; that’s the most credit I ever take….. What was important in those days was the publishing. Prestige wanted to have the credit because publishing was a large percentage of the income from the records, so they credited it to me as though it was composed by Sonny Rollins. It’s very confusing. But I didn’t write it. But the record company was more than happy to ascribe composing to me—so that they could take the proceeds.’

The variations on ‘Moritat’ have a fluency, sureness and creativity with Rollins sudden yelps. ‘Moritat’ was written by Kurt Weill in 1928. Louis Armstrong sang it as ‘Mack the Knife’ in 1955. ‘Moritat’ was very popular at the time of the recording. It indicates that Rollins was not content to choose the tried and trusted and throughout his career he chose pieces that many would not have considered appropriate to improvisation. The drumming from Roach resonates and has a certainty, almost a swagger.

‘Strode Rode’ has an idiosyncratic rhythm. The drive comes from the drummer and the way that he underlines the Rollins’ notes of the theme. The variations are from Roach who builds a rhythmic structure that supports Rollins quirky tune. So much of the energy and movement comes from the drummer, Max Roach, who is underlining the rhythm with accuracy and power. Unspectacular bassist, Doug Watkins had the musical gift to be able to play exactly the right note in a chord at the right time to compliment the soloist.”

‘You Don’t Know What Love Is’ is conveyed By Rollins with gruff anti sentimentality. Tommy Flanagan comes in so quietly, with such gentleness that the description ‘the poet of the piano’ becomes appropriate. Flanagan an unspectacular player would go on to feature with John Coltrane on ‘Giant Steps’ Rollins’ solo often sounds as though he is having a conversation with the theme as he plays.

The final track, ‘Blue ‘”, is one of the most discussed tracks in jazz. It is a blues piece, over eleven minutes long. The main melody was spontaneously composed. The performance is among Rollins’s most praised, and is the subject of an article by Gunther Schuller entitled “Sonny Rollins and the Challenge of Thematic Improvisation”. Schuller praises Rollins on ‘Blue 7’ for the way that Rollins explores and develops the themes throughout his three solos, so that the piece is unified, rather than being composed of unrelated ideas. Schuller admired Rollins’ skill in constructing solos through the creation of simple musical motives. Rollins excelled in using these as thematic material ─ restating them, varying them, elaborating on them, rather like a sonata.

Gunther Schuller had feet firmly planted into the worlds of jazz and classical music. It was Schuller who coined the phrase ‘Third Stream, Music’. Schuller tended to judge jazz in the way that classical music would be evaluated. It seemed as if Schuller wanted give jazz the same veneer as classical music. Gunther Schuller analysed Rollins’s style of improvisation, calling attention to the tenorist’s methods. Schuller’s observation may have made the instinctive, spontaneous flow of Rollins’s playing sound like the result of an analytical process.

Rollins’s reaction to Schuller essay was puzzlement. ‘I didn’t know I was doing that,’ he reportedly said. Rather than increasing his self-confidence, it had the opposite effect multiplying Rollins’ self-doubt, self-criticism and anxiety as he tried to live up to its theoretical implications. For years after this, Rollins’ career would be subject to re-examinations, sabbaticals, retirement and temporary disappearances.

Nevertheless, in 1956 everyone on this album was at the top of their game. All the playing has a supreme assurance.

In 2017, ‘Saxophone Colossus’ was selected for preservation in the National Recording Registry by the Library of Congress as being ‘culturally, historically, or artistically significant’.