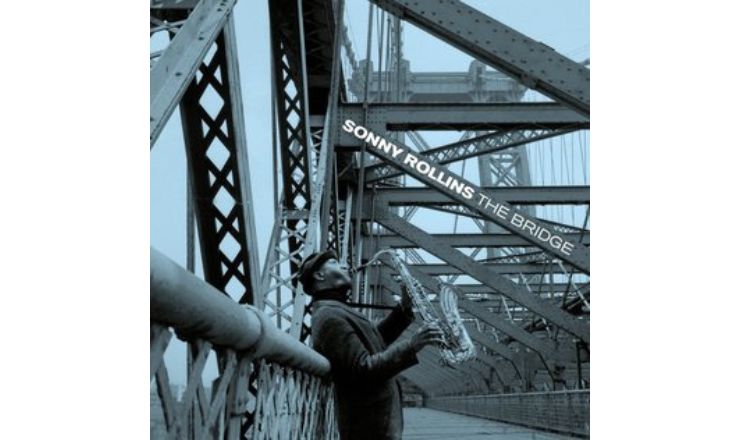 In 1962 Sonny Rollins had not played in public for three years. That was not an ordinary three years: Miles Davis had recorded ‘Kind of Blue’ ; Ornette had swept into New York with ‘The Shape of Jazz to Come’. The anticipation was great as aficionados wondered how Rollins would rise to this challenge. How would he regain his former pre-eminence? Persistent stories emerged that Rollins was playing at night on the Williamsburg Bridge. Speculation was intense.

When it was released ‘The Bridge’ was a disappointment.: nothing as ground breaking as Miles Davis improvising on modes or Ornette dispensing with almost everything that had gone before. Jim Hall was seen as a conservative improviser unlikely to push Rollins to new heights.

Rollins explained that in 1959 he had wanted to pause to reconsider, to improve. On ‘The Bridge’ he did not want to innovate but to consolidate and he did. There is no piano here he just shares with Jim Hall.

The original RCA album had six tracks, the first six on this current CD. Rollins has two pieces (John S. and The Bridge), An idiosyncratic choice of tunes has always been a feature of Sonny’s work; in the past he had even improvised on ‘I’m An Old Cowhand’. Nothing as strange as that here. ‘Without a Song’ and ‘You Do Something to Me’. ‘Without a Song’ includes good thoughtful solos from Rollins, Hall and Cranshaw.

‘Where Are You?’ is a ballad given a thoughtful reading. ‘John S’. is unusual with its 34-bar choruses. ‘The Bridge’ is fast and unusual because it consists of choruses that are either in common time or a mixture of 6/8 and 4/4. Both Rollins and Hall enjoy their freedom on this one.

There is always drama with Rollins. His introduction to ‘God Bless the Child’ is played slowly to emphasise the beauty of the piece. Rollins and Hall seem at one here and in some ways this is the most memorable track. One critic described Rollins’ solo as ‘desolate’. ‘lf Ever I Would Leave You’ lasts for 12 minutes and it features a bossa nova beat. For the rest of the sixties Sonny revelled in long solos, this is almost a prophecy of what he would do. ‘The Night Has a Thousand Eyes’ at nine minutes has the same feeling of magisterial unlimited improvisation.

Jim Hall has a difficult role here. Rollins is not a collaborator; he tends to dominate. Hall shows that he can match Rollins at speed and in the lyrical pieces.

The last two tracks, part of the bonus, come from Ralph Gleason’s ‘Jazz Casual’ TV show. The sound on these tracks is not as lively or polished as the original RCA recordings.

Maybe the lesson of ‘The Bridge’ is that Rollins would go his own way. After all, that is what he has continued to do. Later that year Rollins would look at the new music and work with Don Cherry from Ornette Coleman’s group to produce the remarkable ‘Our Man In Jazz’.