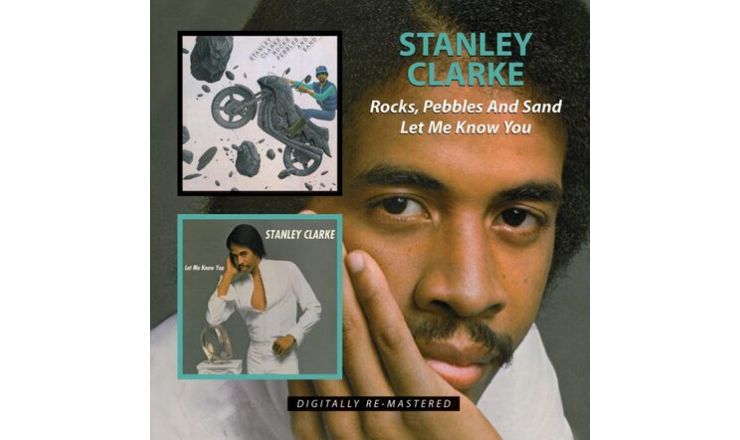 This double CD package costs a tenner, and despite the low price, BGO have not skimped on the packaging. It comes in a CD jewel case with slipcase, and the CD booklet features the original liner notes and lyrics, plus a five-page essay by John O’Regan. This package should be titled, “The Two Sides of Stanley Clarke,” and is exemplified by the respective album covers. Rocks, Pebbles and Sand (released in 1980) has Clarke – dressed in jeans, boots and baseball cap – riding a motor bike made from stone and crashing his way through a shower of boulders. Let Me Know You (released in 1982) shows Clarke dressed all in white and looking like a supper club singer, with his shirt open half way down his chest, and his right elbow resting on an arty glass sculpture. It’s an uncomfortable pose and one wonders whether it reflected his thoughts about his then new musical direction – more on this later.

But first, let’s look at Rocks, Pebbles and Sand. By now, Clarke was a jazz superstar, thanks to his ground-breaking album School Days, released in 1976. He also had his own signature sound, playing an Alembic piccolo bass, tuned an octave higher than a conventional bass. By this time, Clarke had also been playing with rock musicians, touring with Jeff Beck in 1978 in Japan and Europe, and in 1979, becoming a member of The New Barbarians, a band put together by the Rolling Stones’ Keith Richards and Ronnie Wood.

It’s perhaps not surprising then, that Rocks, Pebbles and Sand is a jazz-rock album with greater emphasis on the rock. Clarke’s studio band comprised on drummer Simon Phillips, a phenomenal talent who is comfortable playing many different musical genres. Phillips had been a session player since his teens – he played on the 1977 Jack Bruce album How’s Tricks, and was also on the 1978 Jeff Beck tour. Phillips would also play on Beck’s 1980 jazz-rock album There and Back, and later form his own jazz-rock band, Protocol. Guitarist Charles ‘Icarus’ Johnson played on School Days, and had also worked with George Duke, Sonny Rollins and Airto Moreira. Keyboardist Steve Bach was a member of Clarke’s touring band.

The menacing ‘Danger Street’ opens the album, with Phillips laying down a heavy rock backbeat and Clarke leaping in with a ferocious bass riff, before Johnson’s fiery guitar joins the mix. Clarke’s vocals have been processed and sound slightly distant and distorted. A burst of a motor bike revving up heralds the start of ‘All Hell Broke Loose’ a driving number that has Clarke playing a continuous 16th note riff and overlaying it with some funky slap bass. Johnson plays a soaring solo while Phillips slams his snare drum. The title track features slinky synth lines, a propulsive bass line and some gorgeous bass harmonics. Johnson plays both acoustic and electric guitar, unleashing a scorching solo on the latter. ‘Underestimation’ is a rock number which starts with Bach playing a scurrying riff on synthesiser and Phillips’ double kick drum going into overdrive. Clarke and Marcy Levy handle the vocals (at one point, Clarke quotes a line from Arthur Conley’s ‘Sweet Soul Music’) while Johnson plays another white-hot solo. Chic Corea also provides keyboard support on synthesiser and Fender Rhodes.

The next tune, ‘You/Me Together’ is quite a departure from the previous four tracks, being a syrupy soul ballad featuring a vocal duet between Clarke and Levy. By contrast, ‘We Supply’ is a funky electric bass duet with Clarke and the late Louis ‘Thunder-Thumbs’ Johnson of The Brothers Johnson (the two bassist composed the tune together). It starts off with a hilarious spoken word introduction by studio engineer Dennis McKay, who, in a cut-glass English accent asks, “Hello, are you tired of the same old funk? Has it got you down and made you sleepy?” The closing number, a three-part suite, the grandly titled, ‘The Story of a Man and Woman’ starts off in a suitably grandiose fashion, with Clarke introducing the piece with some graceful harmonics before Bach plays a fast and furious keyboard riff, reminiscent of the manic playing of Rick Wakeman and Keith Emerson. Chic Corea also plays on this track. Part One is a hard driving number that lasts less than two minutes before Part Two commences. This mid-tempo section features another Clarke and Levy duet on vocals, with Johnson playing some wailing guitar and Bach soloing on synthesiser. Part Three reverts back to heavy jazz-rock as Clarke plays some soaring lines on his Piccolo and Phillips is unleashed on the drums. The synth lines build and build, and the track ends with Johnson’s sweeping guitar.

For me, Rocks, Pebbles and Sand is a very satisfying album and in fact, it’s one my favourite Stanley Clarke albums. Clarke was obviously pleased with the results too, because he took this band on tour – it’s a shame that a live album of the band wasn’t released.

Before we look at Let Me Know You, it’s worth putting the album in context. The worldwide success of George Benson’s 1980 album Give Me The Night, which was a pop, soul and jazz hit record, and generated several top 20 singles, had music company executives scurrying around for jazz artists who could achieve similar success. Jazz musicians were often encouraged or even pressured to become more commercial. In 1981, Clarke joined forces with his old friend and musical associate George Duke to produce the album The Clarke/Duke Project. The album spawned a hit in the form of the soul ballad ‘Sweet Baby’ which reached the Billboard Top 20. One can imagine that when Clarke came to record his next solo album, an executive whispered into his ear, “Forget about all jazz-rock stuff; think ‘Sweet Baby’; think crossover. It’ll make you a star!” Whether this happened or not, Clarke shifted gear radically, jettisoning most of the jazz and opting for pop/R&B tunes. On all but one of the tracks, Clarke provides the vocals, and while his voice is not unpleasant, even he would admit that he’s no Lionel Ritchie. Clarke plays an array of instruments including, piccolo bass, tenor bass (a tenor bass is tuned ADGC, while a piccolo is tuned EADG), guitar, sitar and synth bass. He’s also joined by a posse of LA’s top session players, and as you would expect, the production is smooth, slick and highly polished.

The opening number, ‘Straight To The Top’ is a driving number that reminds me of ‘I Just Want To Love You’ from the first Clarke/Duke Project album. The banal lyrics include, ‘My girl she knows she’s one of a kind/my girl’s impression stays on my mind/ my girl’s sophisticated is her name/my girl is destined for fortune and fame’ Carlos Santana dials in the kind of guitar solo he can play in his sleep. It’s hard to believe that this music is from the same man who recorded ‘School Days’ and ‘Lopsy Lu.’

The title track is the album’s only instrumental and one of the best tracks. It comes closest to the Clarke that most fans will know and love, with some gorgeous melodic playing over a shimmering synth lines and a heavy backbeat. But as the saying goes, all good things must come to an end, and ‘You Are The One For Me’ (which opens ominously with the sound of thunder and heavy rainfall) is an MOR ballad that one could imagine Celine Dion happily adding to her repertoire. ‘I Just Want to be Your Brother’ is a happy, bouncy number featuring another Santana solo, while ‘The Force Of Love’ is the kind of jaunty, funky song you could see the pop/soul group Shalamar covering.

During the 1970s and 80s, many soul and jazz artists included short snippets or musical interludes on their albums (even Miles Davis joined in, with the one-minute long tune ‘Robot 415’ on his 1984 Decoy album), and this record is no exception. ‘Play The Bass’ is an energetic jam, with drummer Ndugu Chancler and percussionist Paulinho Da Costa joining Clarke, who overdubs several bass lines (he even quotes the theme from ‘School Days’) and chants the title in places. It’s got a great groove, but just as you’re getting into it, it fades out after a little over a minute.

The mid-tempo ‘Secret To My Heart’ has a gritty guitar riff and features one of Clarke’s better vocal performances. It’s actually not bad. The closer is the anthemic ‘New York City,’ a paean to the Big Apple and the musicians who played there (Miles Davis gets a name-check). While some might find the 1980s can-do lyrics a little grating (“Now in New York survival is the game/and if you fail only you can take the blame”) it’s got a catchy vocal hook and Clarke plays some nimble bass.

Clarke would continue ploughing the same commercial furrow in the following album, 1984’s Time Exposure (one track even included lead vocals from Shalamar’s Howard Hewett) but it was a far more satisfying album, featuring more jazz-funk. At the time of Let Me Know You, many of Clarke’s fans must have wondered where the bassist was heading musically. One of the benefits we have now is that we know what the future had in store: Clarke would find his mojo again, and return to captivating listeners with lashings of jazz-rock and jazz-funk on later tours and albums.